On Tuesday, I visited the drive-up at our bank, and sent the paperwork into the office by pneumatic tube.  I was in plain sight of, and being served by, the regular teller who takes care of me every time I go into the office.  And today, she addressed me as Mrs Sherman.  Now, that's fine with me, of course.  But, I have long hair, and my wife has short hair.   Maybe she had just attended a sensitivity training class...or perhaps she needs new glasses?

My friend repaired the broken part for my antique car a couple months ago, which resolved my smog control issue for now.  But I'd advertised for a used replacement part, in a car magazine.  Someone called while I was at the car show last weekend, offering me similar equipment from the next size larger engine.  My wife phoned me with the information, and there were several knowledgeable folks at the show to ask about it at the show.  Their consensus was "I don't think it will fit, but don't know for sure."

When I got home, I decided to stop at the local dealership to inquire about the part's number for both engines, figuring if they were the same, it was the same part.   "Ma'am, our records don't have to be kept for more than 7 years.  But we go back 15.  We can't help you.  Sorry."  And he moved on to other duties behind the counter, basically ignoring me.   Before I traded in my '91 last year, a different (and much more helpful) parts clerk at this same dealership helped me track down a part number for it from their records.  And that car was 22 years old at the time.  So this guy's answer was obviously "baloney", "poppycock," "horsefeathers," "bulls**t" or whatever you call it in your part of the world.  I truly believe he was saying "she's just a dumb woman - I'm not wasting any time on her."

I'm certainly flattered that I "passed," without even trying (wearing an everyday capri outfit, ballerina flats and purse).  But I  felt I was being treated as inconsequential and not worthy of being helped.

Needless to say, that was our impression of the entire dealership, from the time when my wife and I were shopping and negotiating for our new daily driver.  While constantly addressing us as "ladies," (despite access to my driver's license for test drives) they talked "down to us" the entire time we were there.   That bad impression of them continues to this day, because we told them "after receiving their first used car solicitation mailing," that we had traded our old car in elsewhere.  They still send monthly mailings offering us big bucks for our old (insert make and model here).   This confirms that the place has some real issues.   We're just glad we bought our car from another dealership.

Next I headed for a national chain's auto parts store.  Their clerk actually invested the time to go into their computerized records and look.  "Ma'am, the parts are listed, but with no part numbers.  That means they're no longer available in our stock."  I asked if there was anyone at the main office who could help retrieve that part number info.  He said, "No, Ma'am.  Obsolete things get their numbers permanently purged."   Here, I didn't get the "go away lady, you bother me" brushoff (though I really was hoping for a more positive answer.)  That's very much to their credit...and they've been nice to this lady each and every time she's been a customer there.  (Maybe that's why I keep going back???!!!)

Final resolution to my dilemma came from a car friend of many years, who's provided many used parts for me, has similar cars with both size engines, and reference books to check.  He's older than me, and knows me as a male...with no official knowledge of my "transgenderedness".  But he's seen me many times in capris and stirrups, with sleeveless tops and flats.   Definitely girly outfits.  And that's never seemed to bother him, bless his heart!  He did some research and checked his manuals for me, measured the parts car engines out in his back lot, and concluded that the parts won't fit.   Networking came through for me, without any issue about my feminine appearance.

Thursday, it was time for a fill at the nail salon.  Both J and P said "Hi Miss Mandy" and introduced me to Miss Laura, another customer, so we could get to know each other while J worked on her french manicure.  Then J had P get started on me, and told her to cut down the 9 very long nails, so the missing one wouldn't be as obvious.  (Good plan.)

I brought a couple of Mandy's pictures to show the two techs, but they insisted on including Laura...and everyone seemed to enjoy them.  "Please bring some more, you're very pretty and we'd love to see them."  Before P started working on my hands, she showed me some "before and after" transformation pictures from her own country on her iPhone...  I didn't know she followed that type of thing!  Then she began prepping my "9" nails for J...

Finally J was done with Laura, and as she was ready to leave, she said goodbye to each of us -  including me. That was surprising, very nice...and very affirming. Then J took over working on my nails, and applied a darker than usual pink acrylic on them, to hide the free edge to the greatest extent possible.  She looked at my broken nail, said she's seen lots worse, and to just let it heal for a week or two, then come back and she'll temporarily paint what's left of my nail the same color as the acrylic.  That way, they'll all match.  And then let it grow out till my next regular fill - so we can see how it heals.

After she was done, I paid my bill, and since no other techs or customers were around, I asked if they'd like to see a few electronic pictures...they both were enthusiastic!  I retrieved my computer from the car, and showed them about 9 highlights...   They liked them all, but the following two, from my Elizabeth Taylor makeover, were instant hits... 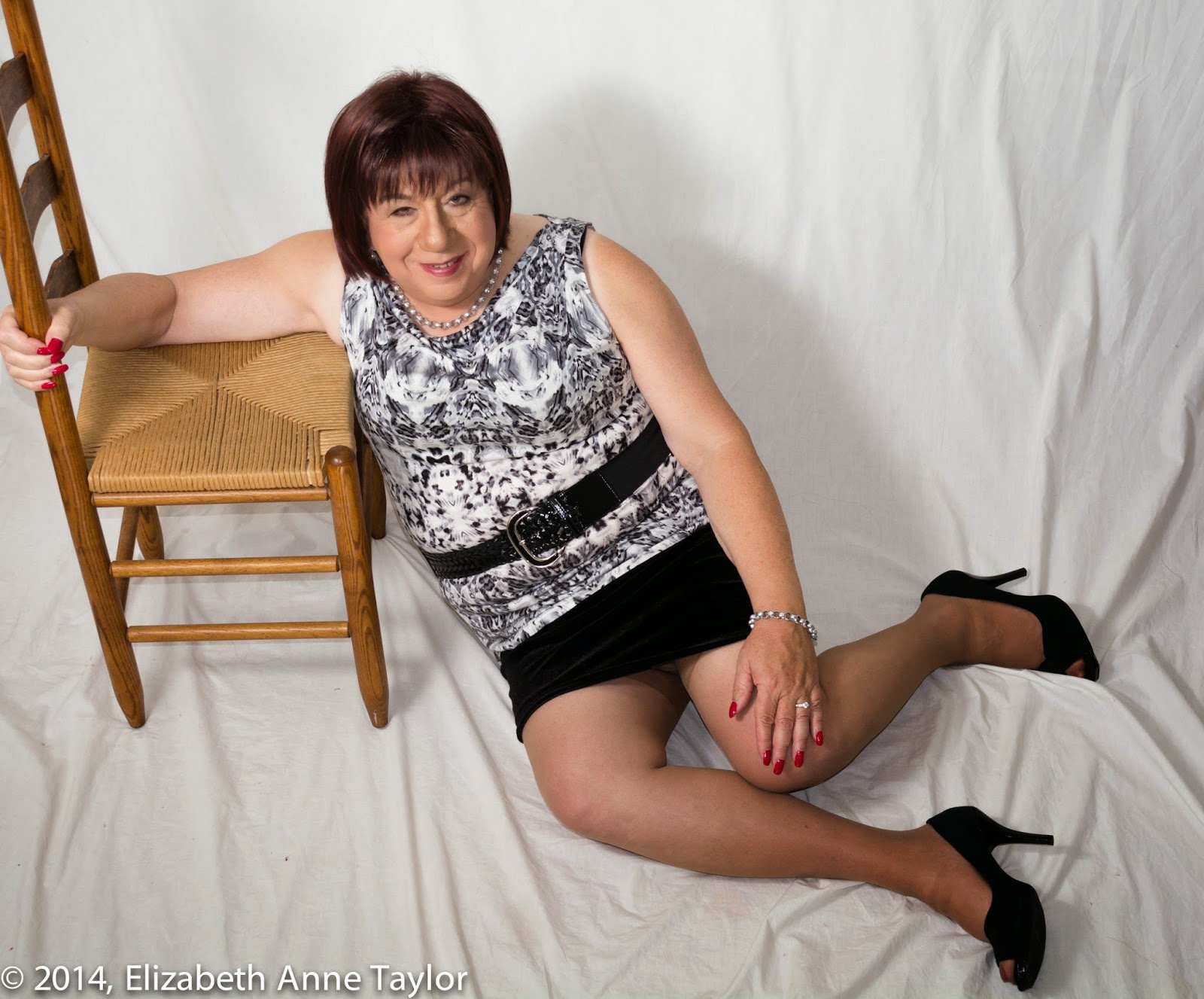 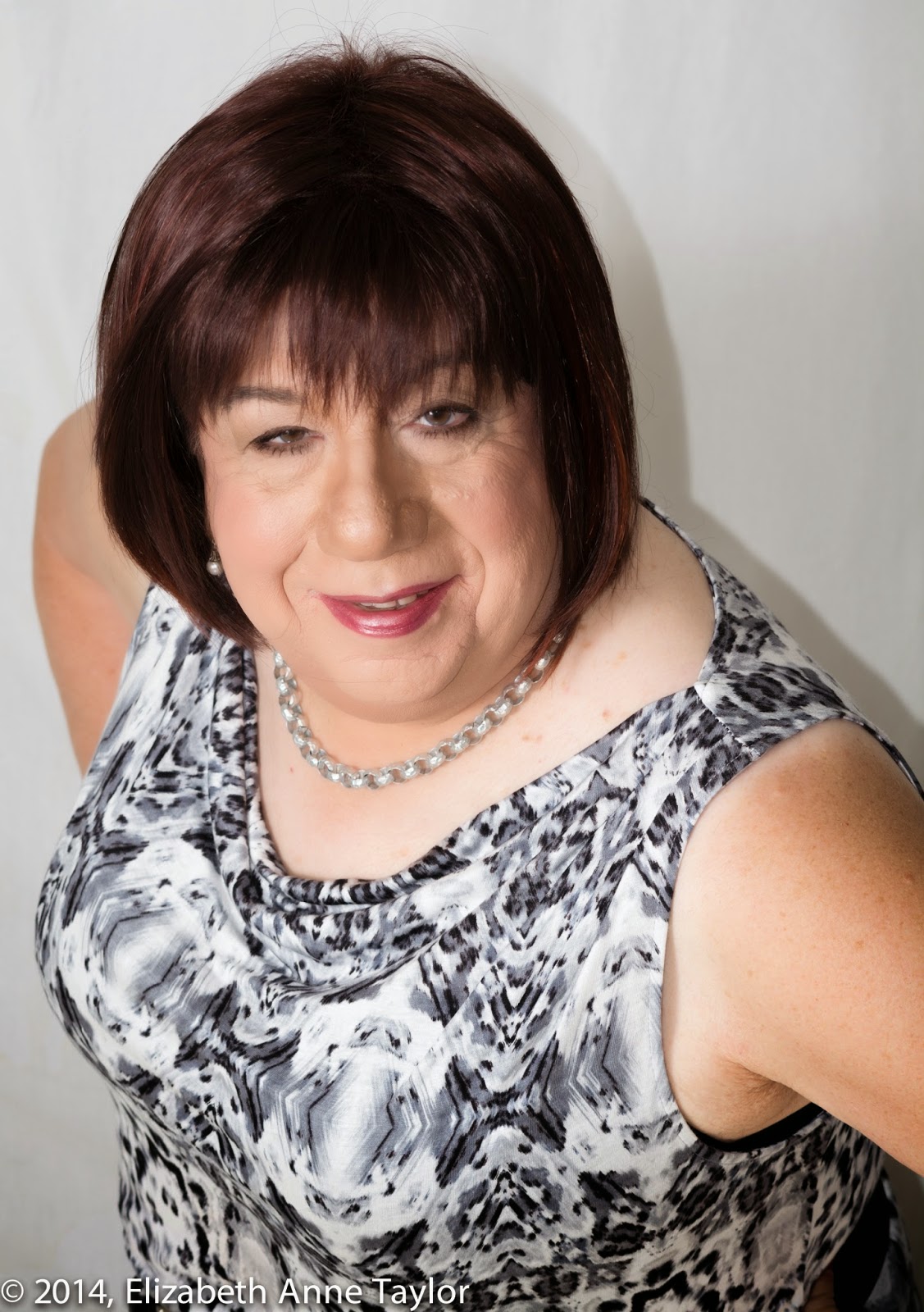 I even got comments from both of them about my red nails in the first one!

It seems like they're just about ready to meet Miss Mandy in a skirt.  Though it won't be this Halloween - time is too precious and short that day.  But it's something to look forward to in the future!

Mandy
Posted by Mandy Sherman at 2:11 AM