"You girls have a wonderful Valentine's Day!"

Sorry about the lack of posts lately.   I guess you could say that life has gotten in the way again, big-time.  Things have been very busy around here, and not all good.  Particularly, the past week...and it had nothing to do with attire.

First, below are a few contemporary pictures...in stirrup pants, a women's top and women's cardigan, with light makeup and ballerinas.  That's what I must wear every day... because with the exception of my capri pants for summer, they're the clothes left in my closet.   And, well over half the time I'm rewarded by being addressed in female pronouns... 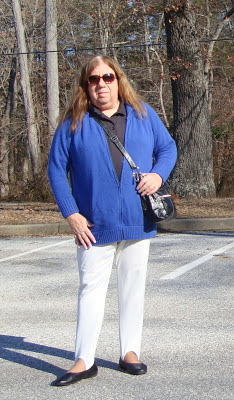 The better half and I celebrated our Valentine's day outing on the day before Valentine's day,  at a little restaurant in a neighboring town.  (We both hate big crowds...so we sometimes celebrate our holidays at odd times.)  Needless to say, I looked like the above...since that's all I wear!

The waitstaff was attentive.  Because they were a bit short on pronouns for both of us, and because I was with the better half,  I didn't alter my voice at all. We got great food and good service. The fun part came in at the end of the meal, when the waitress came by and put the check on the table, with the comment "Here you go, ladies, I'll take it whenever you're ready."   The better half picked up the bill, took out her charge card, and the waitress came by as promised to pick it up.  When she came back with the charge slip, the better half signed it, and as we were getting up to leave, the waitress said, "You girls have a wonderful Valentines Day!"  Both of us said "Thanks, you too" in unison.  And we left.  I was happy!

But I wasn't so sure about the better half being happy.   As it turned out, the next day (the real Valentines Day) I found out why she didn't look or sound very good.  That morning, while I was out running some errands, she suddenly became ill, with symptoms mimicking that stomach virus which has been making the rounds lately. (I won't go into those details - TMI.  You already know what they are.)  But she was one sick little puppy all day and through the night.

To make a long story short, by early Friday morning (like 5:30), with no improvement and even some deterioration, she was finally ready for me to call 911 and get her a ride to the hospital in an ambulance... something I had tried in vain to talk her into the evening before.  Taking her in the car was out of the question...because of her symptoms.  Plus, from prior experience with my mother, patients arriving at the ER by ambulance seem to always be seen before those brought in by family.  And she needed to be seen - NOW.   About 15 minutes later, after grabbing some of her things and locking up the house, I followed in the car.  She was already in a bed in the ER when I got there, apparently having completely bypassed the coughing, sneezing, snorting, wheezing, groaning masses filling the waiting room. (Of course, it could just be that she was sicker than most of them...but in my over 60 years on this planet, I've yet to see people on gurneys languishing in the waiting room awaiting their turn, behind the others who entered the queue ahead of them.)

After being tested for many things, instead of the expected gastro-enteritis (sp?) it turned out to be much more serious, a condition of which we had no previous indication.  But, if there can be a ray of sunshine after a rather gloomy few days, at least that condition is treatable.  She came home from the hospital after only a four day stay (including 2 days in ICU.) 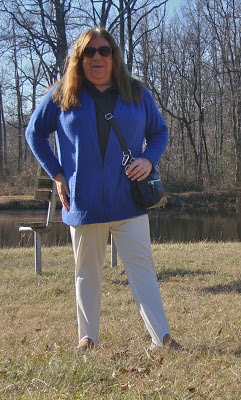 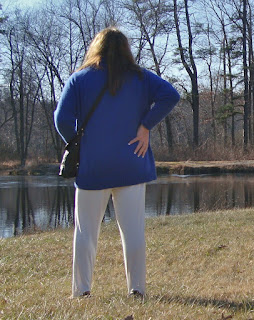 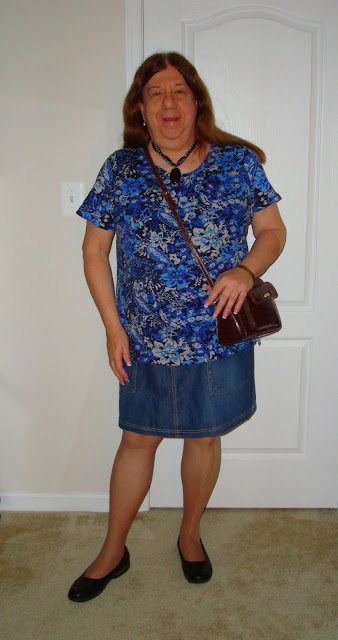 A nice and feminine look for sightseeing...


I finally pulled together some travel plans for July, because of a meeting in Chicago. It appears that I'll meet the better half at our destination - she'll depart a few days earlier to visit relatives.   This will allow me the freedom to dress AND travel en femme, something in the past I've never had time to enjoy.  I love this plan!

I'm planning to leave home a full day early, and overnight in Baltimore the night before departure.  This provides two continuous days en femme, longer than I've ever attempted.  And, yes, I can even arrange to be dressed when I leave the house!   I'm really excited about the prospects!  Yes, I'm feeling a bit more confident than I used to, and plan to get some makeup issues solved in the next couple of months, making this an improvement for my presentation.  Keep your fingers crossed!

My intention is to wear the above outfit the first day.  I'll be spending that free day at some local museums, then depart early the next morning.  Since I'll be standing most of the time, my denim skirt will be perfect.  I have a very different type of outfit planned for my second day....with a much longer skirt, since I'll spending most of the day sitting on public transportation and dealing one-on-one with staff members and the traveling public.  I'll put pictures of that outfit into a future post.

For those of you who've checked out my "purses" blog from December 6, 2012, you may notice that in these pictures, I'm carrying my Liz Claiborne bag, which I picked up for a song at the thrift shop.  It's actually a fairly small purse.   But if I forget about trying to jam a wallet in it, and just use the credit card slots and money compartments provided inside the purse, then eliminate everything I don't really need, it's a perfect fit!  I'll still have my camera with spare chips and batteries, cell phone, spare glasses,  contact lens supplies, lipstick, face powder, and blood pressure meds.  Just nothing unnecessary.  A side benefit is that I can hear my cell phone ring.  That's something which rarely happens with all of my other bags!  I'd love to thank the woman who gave up this perfectly lovely purse...her loss is definitely my gain!

Though nothing further has been said about the better half's previously-discussed idea of putting me in skirts or dresses and donating all my pants to the local thrift shop, if that plan comes together, my legs will be on full-time display all day, every day.  But I want to let it be her choice, so my wearing skirts remainsl fairly closeted around her and the neighbors. 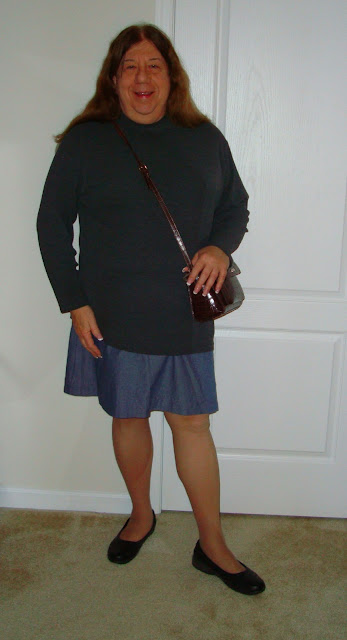 I picked up the above little skirt from the thrift shop, for less than $3.   It's a tad shorter than the one in the previous picture...requiring even more attention to keeping my knees together when sitting.  I'll definitely need to wear black panties underneath for modesty, just in case!  But it's comfortable and fun to wear - as long as I'm doing a lot of standing.  While the better half was in the hospital, I spent some time wearing it at home.   The turtleneck goes well with it, don't you agree?

Given all the medical events of the past week,  I'm surprised I've found even a few minutes to throw this blog together, so don't look for more posts this month.  The better half and I need to adapt to a new diet (we'll both share it - might even help me lose weight) and other things for her benefit.

So I'll ask the question:  do these outfits look OK?  Please feel free to respond - I'll be watching. and would love to hear some comments from my readers!
Posted by Mandy Sherman at 10:42 PM 2 comments: