Just Too Many Gremlins

Last weekend's trip out of town with the antique car had been on the horizon for a long time.  It gave the promise of some enroute sightseeing, then on to a car show the next day, and lots of skirt time afterward, as well as the last day.  As you probably know, "promises" typically get broken when gremlins appear.

An irreplaceable part on my antique car had broken a couple of months ago, and a friend in another city repaired it for me.   He contacted me a couple days before the trip, with the news that he was going to be at the same show.  "Let's get together Friday afternoon, beforehand."  OK, sounds like a plan.  But. so much for the sightseeing.  (That was the first gremlin...)

Trouble is that he was staying in one town, and I was in another, 30 minutes away (with a tailwind, downhill) - certainly much more in Friday afternoon traffic.   But he included his cell phone number in the email so I could call when I get in, and I responded with mine, telling him to call me if he didn't hear from me by 3 PM.

I arrived after two and gave him a call, but a woman answered.  Oops.  Wrong number.   But I called the exact number he gave me.  The clock wound past 2:30.   Then past 3.   I emailed him, a couple times during the wait...and even tried calling the number after rearranging some of the digits that people often transpose.  Those numbers were all disconnected.  So I called the "wrong number" lady and apologized but I was concerned that the phone company had messed up.  No, she told me that she's had the number for 11 years. so there is some other problem...    By then it was 4 PM.  Still no call, and no response to emails. (The second gremlin.)

At about 4:15, he finally called.  I explained the problem to him.  He was going to check his email when they get to where there is wi-fi and see what happened...as it turned out, with rain showers and early darkness, neither one of us wanted to drive the old cars that late in the day.  So we agreed to meet at the show on Saturday.   And after hanging up, I checked the number he called from - the number he emailed me had 2 digits transposed.  But, they weren't ones I'd tried to fix...  The third gremlin had crept in...while nobody was looking.

It rained Friday night, and was still raining Saturday morning.  I drove from the hotel to the car show in pouring rain.  (I guess that's why David Dunbar Buick put wipers on his cars.)  During that drive, I discovered that one of the original-style T-3 headlights I installed for the show, had burned out  Those old T-3's are useless anyway...but now I have half the poor light I did before.   Since half of nothing - is still nothing,  no night driving this trip.  (The fourth gremlin.)

While cleaning the car on the show field after I arrived (the rain had slowed to a light mist), I hurried too much, caught the nail on my right little finger on something in the grille, and it cracked crossways.  Not just the acrylic, but the nail as well.  And so, about 1/4 of the real nail peeled off in my hand...ouch.  Not pretty.  It was time to head for the paramedic tent...where they bandaged it up for me (minus the missing portion of the nail), which they said should grow back eventually.  But this was the fifth gremlin of the weekend.

At least the car won an award! (The gremlins forgot to alter that...)

Back at the hotel after the show, gremlin number six appeared as I realized, after getting cleaned up and into a skirt outfit, that the sun (which had come out during the afternoon), had disappeared behind an advancing cloud deck.  It was obviously going to be dark a lot earlier than I had planned.  Before dinner, I had to visit one (and it turned out to be two) major chain pharmacies to find the proper dressings for my "amputated" fingernail...that was a first priority because the exposed quick was still draining and it was time to change the bandage.  The picture below is my outfit for dashing into the pharmacies: 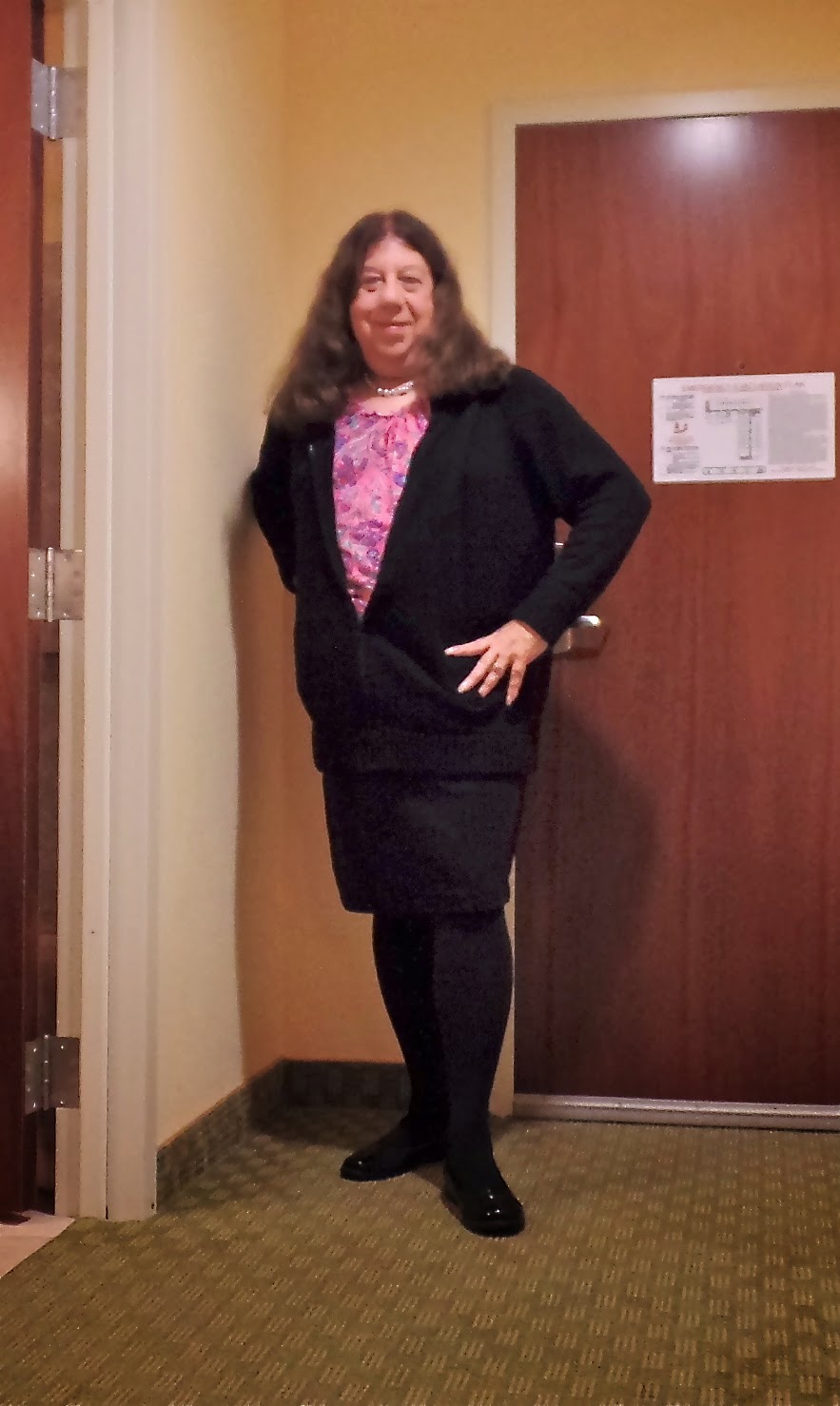 By the time I finished with that task, light was fading fast.  That burned-out headlight was really cramping my style big-time.  Instead of enjoying a nice, relaxing dinner at a restaurant, there was only enough time for me to drop in at a large, newly-opened chain grocery store (fortunately I found a big parking place right near the door, thus no sweater needed) and picked up dinner to eat back in the room. 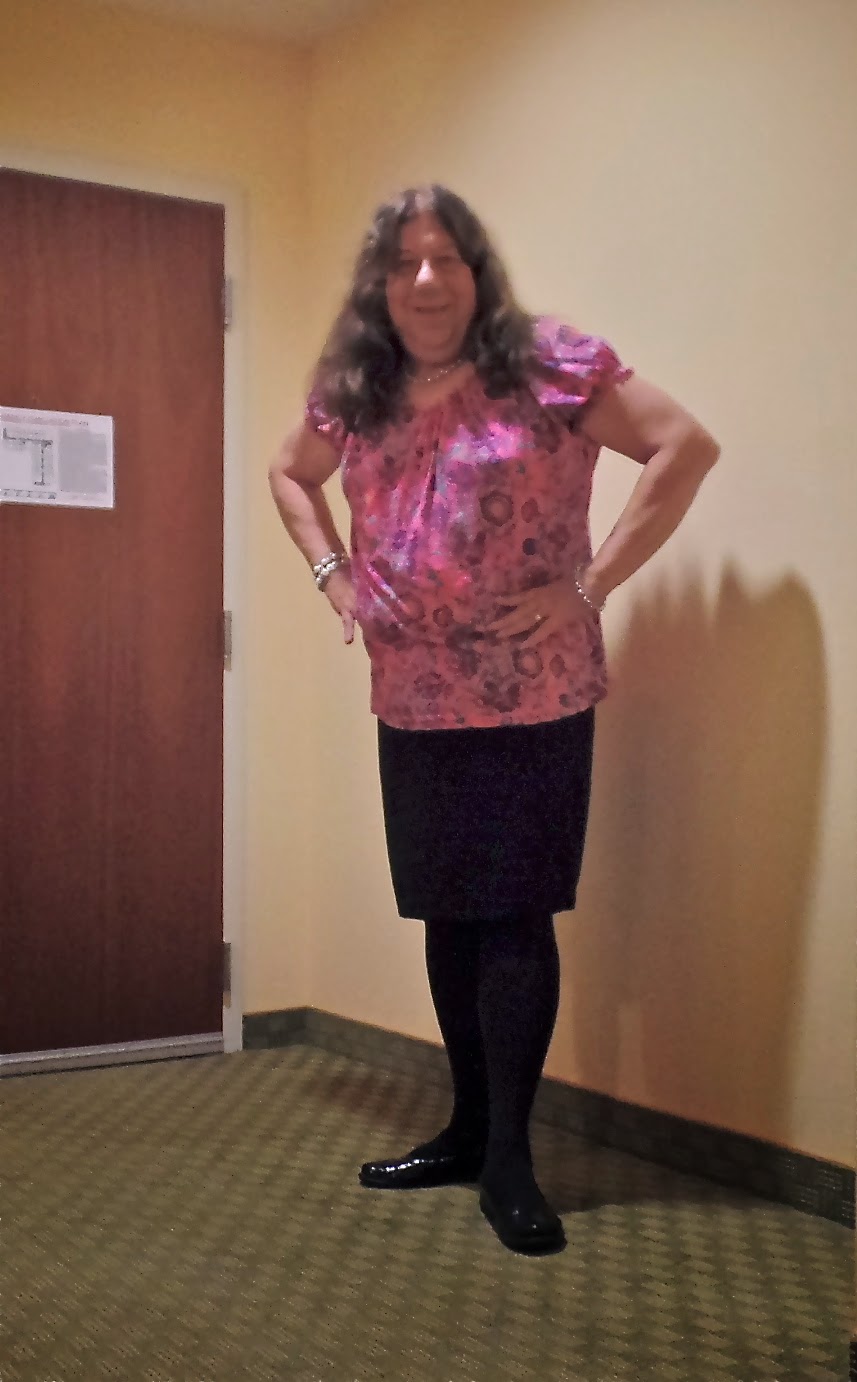 Though the store was very crowded, I didn't notice any strange looks whatsoever.  Not from anyone, including a lot of teenage girls.  And there were plenty of those.  Rest assured though -  Mandy would rather have gone to a restaurant.

But those gremlins STILL weren't done toying with me.  They obviously had Mandy "in their crosshairs" for the entire weekend.  Early Sunday morning, I woke up at about 3:30 AM, feeling absolutely terrible, and was afraid to lay back down and go to sleep... concerned that I might feel worse when I got up "the second time."  And there was no way to get home except for me to drive...

So I took some aspirin, relaxed a bit, and passed time on the computer, till breakfast was ready in the lobby at 6:30.  Feeling somewhat better, certainly well enough to start my trip home, I loaded up the car and headed back, but abandoning plans for back-woods sightseeing (why risk getting sick where there is no cell phone coverage) or dressing...in case I got sick on the road.  But I made it home safely, with no issues.

For those who might be concerned, my malaise apparently was complete exhaustion from two long days and very restless nights...  When I got home, I took a four-hour nap, and went to bed right after dinner.  Felt much better when I got up the next day...  Getting old is H--L.

Two days prior to departing for the car show, the following sunset presented itself to me as I was out and about.  Have camera will travel.  So, I leave you with this picture of Kent Narrows, from the Delmarva, looking west toward the Chesapeake Bay in Maryland: 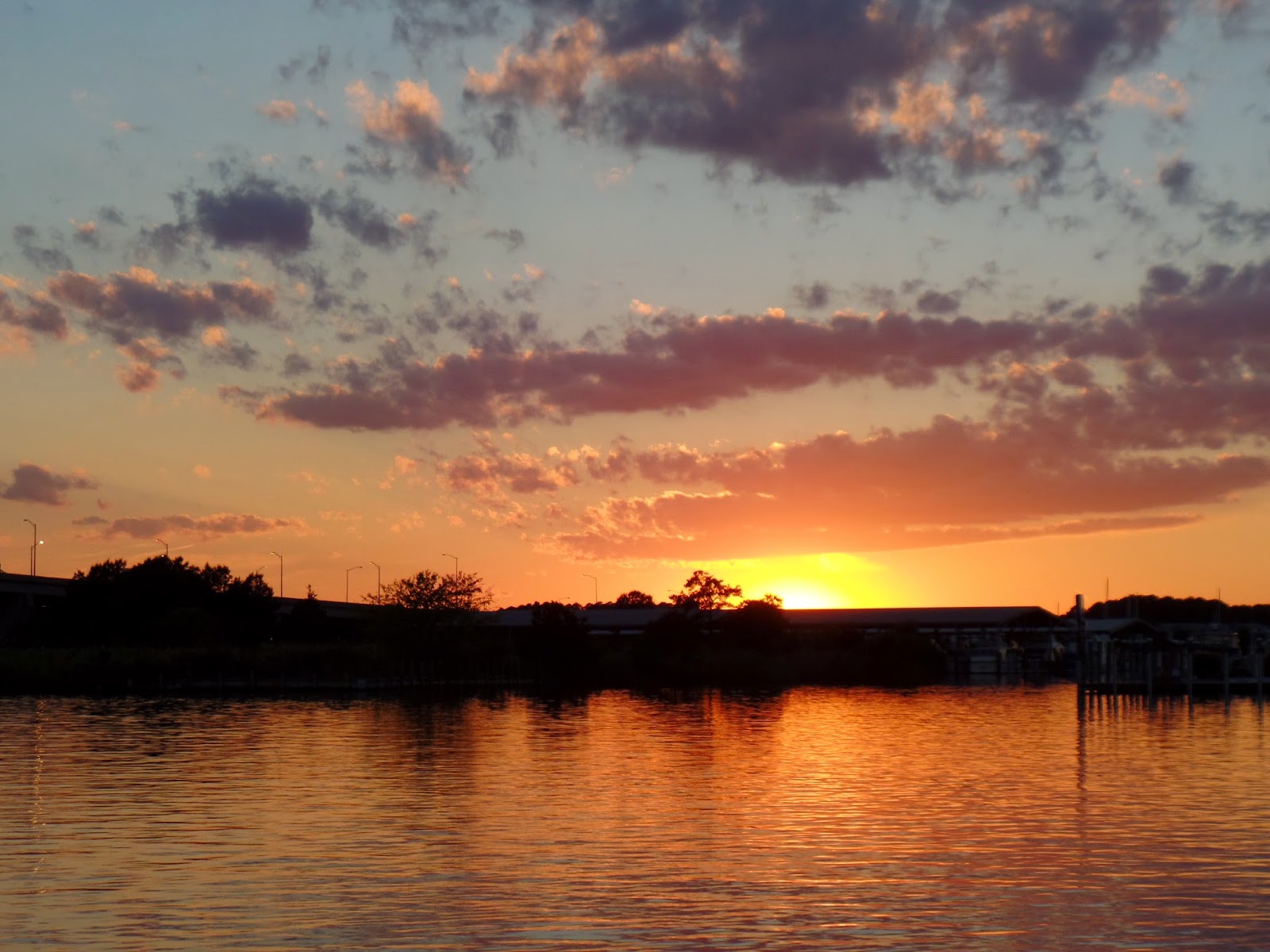