On to Plains, Georgia for some pure sightseeing!

All too soon, it was time to leave Florida and Disney behind, along with its oppressive heat/humidity, and drive north to cooler weather, as well as our son’s home, in TN.   Before you ask, my attire for this portion part of the trip was stirrup pants, pantyhose and a turtleneck blouse, with a sweater.

Enroute, keeping with our tradition of sightseeing, we stopped off in Plains, Georgia to visit the home town of former US President Jimmy Carter and his family.   While we didn’t have much time to spend there, we were able to at least visit most of the historic sites:  campaign headquarters in the railroad station, his boyhood home, the church where he worshipped (and still does), the high school (which is a visitor center) and brother Billy’s garage.  It was a brief but fascinating glimpse into the man who rose from peanut farmer (and relative obscurity) to governor and then President of the United States.

When checking into our motel in a nearby town, at dinner, and while shopping at the big box store in nearby Americus, GA, we were treated as two ladies.  That’s the way it should be, even though I wasn't wearing a dress.

It was unfortunate that we didn’t have time to attend the Maranatha Baptist Church the next day (Sunday) to hear Mr. Carter, who still makes appearances and teaches Sunday school at the church.  Due to the extremely early arrival (4:30 AM required for a 10AM service) in order to comply with security regulations, we chose not to attempt that.  However, it would have made for an interesting morning.   Maybe on another trip… 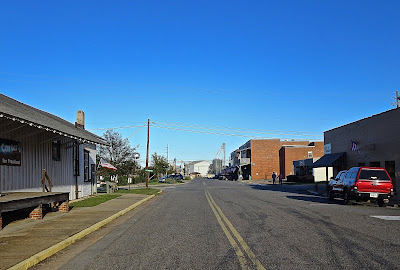 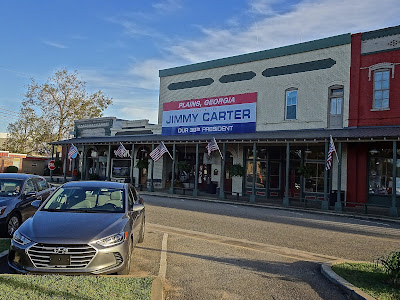 Campaign headquarters downtown, from the park across the street. 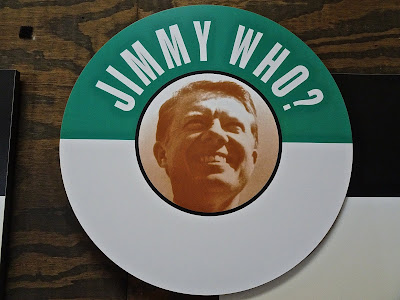 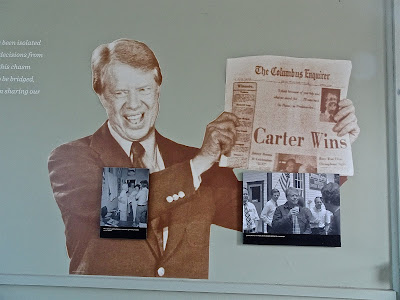 Another display in the train station. 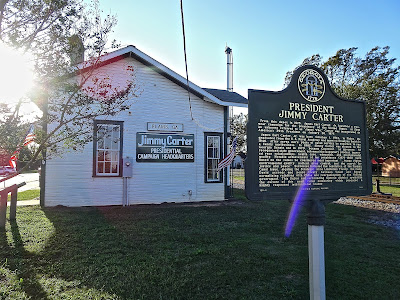 Side view of train station. 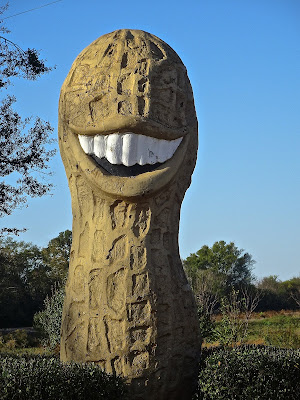 When we looked over the maps from the visitor center we saw references to "The Smiling Peanut."  Curious to see more about it, and expecting it to be a sleazy biker bar or something like that, we were both shocked to find this huge caricature.  A really good likeness of Jimmy's smile, don't you think?  And Jimmy and Rosalyn still live in town...obviously they are fine with it.   Whether you liked (or can't even remember) his politics from "away back in the day",  presentation of all this casts a fairly good light on the 39th President of the US and winner of the 2002 Nobel Peace Prize (for his work to find peaceful solutions to international conflicts.)

From the "If I hadn't been there I wouldn't have believed it" department:

Saturday (Today) was my day to get my much-needed  mani and pedi (which wifey knows I get,  and is OK with.)   I walked in, and my tech was finishing up a young girl, who was getting a manicure with beautiful turquoise polish.  So I sat down in the waiting area.  The young girl kept turning around to look my way for a double-take, then a triple-take, then a quad-take (as in “I can't tell whether you are a boy or a girl.”   You’ve been in that situation at some point - you get the picture.)  Each time I smiled at her, and she looked away.  Her mother was sitting near by, quite oblivious.

Soon her mani was finished.  The tech moved her to the drying table, and moved me to the just-vacated chair, putting the girl and I less than 5 ft apart..  The double-takes continued, and I sweetly told her she was welcome to come watch them do my mani.  She had no reaction…but the double-takes did slow down after that.    About 10 minutes later, my tech asked me to wash my hands.  And while I was doing that, the young girl moved back to the mani table for a quick application of glitter to the ring finger on each hand.

When I came back, the little girl looked up as I told her that her color was very pretty, and the glitter was a perfect addition.  And I commented that she had beautiful nails – it turned out that they were quite long, too.   Well, my comments broke her indecision…she decided that I was a girl, and thanked me…then asked what color I would be getting.  I told her that someday I’d like to try her color, but today I was going with a translucent light pink.   Then I complimented her nail length, and she confided that it was her 9th birthday present – “they’re acrylic so they’ll last a while.”

We did the usual birthday talk, and by this time she was chattering to me like a magpie, now that she was comfortable with my being female.   Then we started talking about Disney.  She has been there twice, been made over twice, and is looking forward to going again next year.  At that point, her mom looked over to inquire: “Ma’am, is she bothering you?”   I assured her “Not at all, hon.”  “In fact, we’re having a nice chat about Disney World.”  Well, that got her mother to join in the discussion about Disney.  Then a customer who had just entered the salon heard us comparing our experiences, and she announced that her family just got back home from there. So now, the count is up to: 3 adult ladies (myself included) and a 9-year-old, all comparing Disney notes.

The little girl's mom went so far as to assure me that in the future, whatever suitcase I put my dresses in (for the formal dinner at Cinderella’s Castle) should never be checked in an airliner or allowed to be moved by Disney personnel.  Hers went lost for several hours, almost causing a dinner crisis.  Which was averted by Disney locating the bag - it had been sent to  the wrong room.  This discussion went on for about 3 more minutes, till the tech finished my mani and started to move me to the pedi station, thus ending our confab.

As I left the room, both women said “see you next time, Ma’am.”  I replied “Looking forward to it, ladies, thanks"!

Wow…amazing, and I was wearing stirrup pants, turtleneck blouse, bare ankles, a women’s zip front hooded jacket, and flats.  Nothing girly like a dress.  I guess the fact that I was getting my nails done did the trick?

It was my best nail salon visit in a long time...LOL!

My absence from blogging over the past month has been regrettable, but unavoidable…due to extensive travel down south, including a one-way trip on Auto Train, a stay at Disney World and an extended visit with our son.  It was a fabulous vacation...for which I can fully credit retirement.   There was absolutely no free and “unsupervised” time for posting…thus my absence.

For this trip, Mandy “officially” was left behind.  No dresses or skirts (well, except my house dress for bed), and no overtly feminine jewelry, such as necklaces or bracelets.   My purse turned out to “not” be big enough, thus I asked for, and received, official blessing to start a search for a bigger one “for traveling only,” with handles as well as a shoulder strap.  I pointed out that it will most likely appear more feminine, but she was OK with that, for traveling only.  On such short notice (2 days before our trip), my search was unsuccessful, but it continues upon our return, until I find just the right one, the girlier the better!

As for outfits, I had to be prepared for any weather, thus I started out (and took along) shorts, polos and Keds (for Florida) and capris/stirrup pants for our son’s place, with various pairs of flats.   As it turned out, shorts and polos were perfect in FL due to the 90+ degree heat (said to be unusually hot).  Capris turned out to be excess baggage, as the weather in TN dictated long pants with turtlenecks much of the time.  Neither wifey nor I wore any capris the entire trip.

At our motel the night before departure from the DC area, my wife and I were both “ladies” at various stores/restaurants, and the motel.  On departure day, I noticed that Auto Train staff in the station did not use gendered greetings for me, but on board, in the dining car, I heard “Sir” at the dinner table - we were seated with two men.   Maybe shorts and a polo were “masculine” enough? 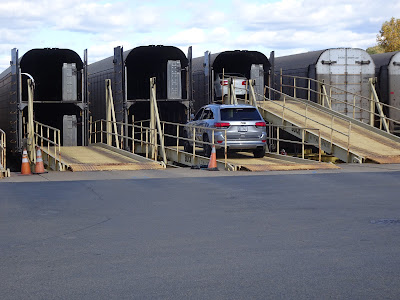 Loading cars on the Auto Train  in Lorton, VA

The next morning, after hearing “Sir” in the diner at breakfast, we arrived in FL and our Disney adventure began in earnest.

As we were driving from the Auto Train station to Disney World, I mentioned to wifey that maybe shorts outfits were the key to “not being seen as female.”  Her response, with raised eyebrows:  “Ummm…you need to listen a little closer, sweetie…to nearby folks who don’t know us, we’re generally two women.”  My response…with a surprised look:  “Oh?  What about the staff in the diner?  I heard them use Sir there.”  “They were talking to the guys seated across from us.  They didn’t use any greeting at all for you.” And then she changed the subject.

With that exchange, I realized that perhaps Mandy wasn’t going to be left behind on this trip after all… 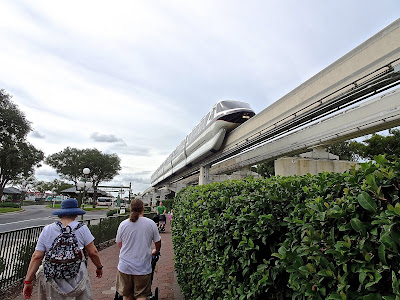 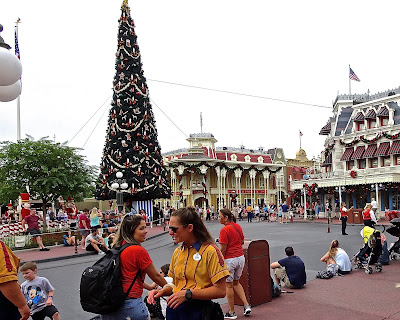 The Christmas Tree in the Square 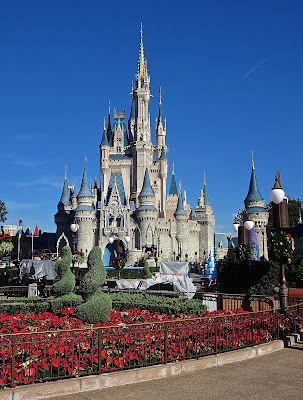 Cinderella's Castle, symbol of  the Magic Kingdom, in daylight 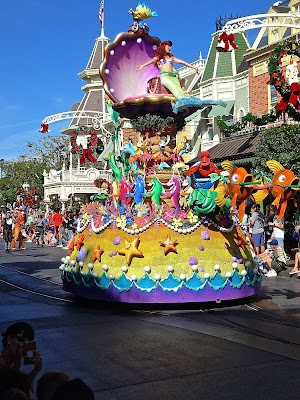 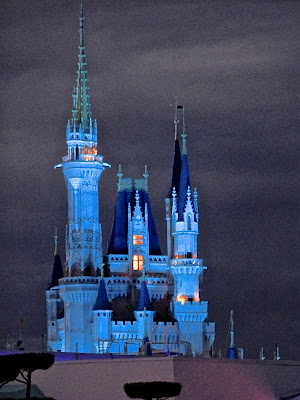