"Some days you get the bear, some days the bear gets you..."

The better half and I had occasion to be traveling by car recently, in the heat of a Pennsylvania spring.  We knew it would be hot from the weather forecast, and Mother Nature made sure to keep the car thermometer in the low 90's each day, once our cooler "introductory day" was over.

The better half still is having problems adjusting to some serious medical issues which befell her back in February, and it's taking a long time, plus frequent doctor visits.  Things have only very slowly been improving, and she has lost some weight.  These issues have sidelined progress toward what at-that-time seemed to be leading into wearing skirts. Because of her medical situation, I haven't pursued the matter.  Right now, it's impossible to predict when, or even if, progress will resume.

However, because my wardrobe now consists exclusively of stirrup pants, capris, pantyhose, ballerinas, sandals, womens' tops and blouses, and nothing else, there has been no problem with my wearing them.  To banquets, parties, social activities, going out with friends, shopping, etc.  The better half's medical problems didn't seem to "rock that particular boat."

For the first and second days of our most recent excursion,  I wore everyday outfits - my stirrups, with polo top, pantyhose and ballerinas, along with my now-normal light makeup.   These caused a few "miss-identifications," but the better half seemed fairly comfortable with that - or at least nothing was said.  The most common reaction from civilians was to omit pronouns completely when referring to either of us.

Given summerlike weather, my stirrups turned out to be uncomfortably warm.  So, the third day, I started pulling on capris, my "summer pants" of choice, since my shorts had all been donated to charity some time back.  The better half shook her head "No" and tossed me a pair of her old shorts, which she explained no longer fit her, but should be ideal for me.   She apparently liked what she saw when I put them on, as they became mine.  And they were much cooler than capris, even though I was wearing pantyhose.

However, the leg openings are much bigger than I'm used to.  And whenever I sit, they ride way up, to provide a "thigh show" and occasionally expose bits of the dark reinforced panty of my pantyhose.  In the car, only the better half (and any passing truckers) can see my thighs (or the tops of my pantyhose), so it's not an issue.  But after a couple of her timely reminders outside the car, I started to pay attention to whether the problem has occurred. When it does,  I discreetly tug at the appropriate hem (sort of like a girl managing her skirt).  In any case, wearing shorts again on hot days is a treat - made even better because they're hand-me-downs from the better half.  For me, the comfort is certainly worth tolerating occasional hemline readjustments.

One of our stops that day was for lunch, at the Pine Creek Inn on route 6 in Galeton PA...out there in the middle of nowhere...and we enjoyed the rustic decor, as well as the food.  Yogi (the stuffed brown bear beside me) and I immediately became good friends...he stood guard while we enjoyed our meal.  The bright spots were that he was exceptionally quiet, and he wasn't hungry...so I didn't have to buy him lunch for his effort. And the better half borrowed my camera, for a quick grab shot on the way out. 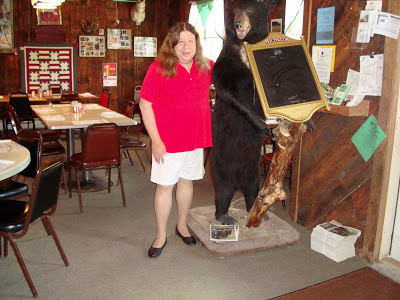 Some days you get the bear, some days the bear gets you...

Lastly, for those of you who enjoy full size antique or historic trains, here's another one for you! 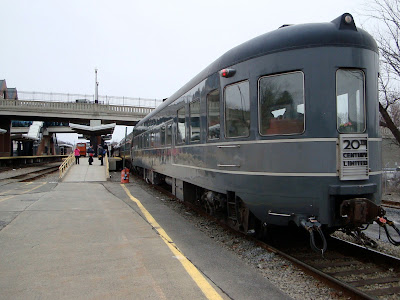 
This beautifully-restored 1940's deluxe passenger car was found bringing up the rear of one of the Niagara Falls-to-NYC Empire Service trains last January.  I was not fortunate enough to be riding on board the Hickory Creek, but it certainly classes up any train to which it is attached!
Posted by Mandy Sherman at 8:49 AM 4 comments:

Virginia Is For Lovers...and historians!


It seems like it may be a while between blogs...but nowadays, when I write, it's long-winded.  I'll apologize in advance for that!   So, anyhoo...grab the beverage of your choice and settle down for some reading...