A Day in Delaware...

As previously stated, February, March and April can be quite sparse as far as Mandy's opportunities to be out and about.  The best I can usually do is to explore things in my everyday androgynous attire.

I've been contemplating a solo shakedown run of the antique car,  during which I'd be able to pull on something more feminine than my normal everyday stuff.   As luck would have it,  the destinations I chose attracted my wife's attention and she wanted to go with me.  Especially since the weather has been so nice...    Unfortunately, the 67 hasn't been put into service for the summer yet.  It's still winter. So we decided to get out of town for a day and make the run in our daily driver, to take advantage of the good weather -  i.e. temperatures in the 70's.   (I have some destinations in mind which will be less attractive for my wife, and more conducive - i.e. less traffic - to the antique.)

Off we went.   You can see my outfit in one of the following pictures  (light colored capris, long dark turtleneck blouse, purse, sweater tied around my waist, and flats.)  Our first stop was to be the Dupont Nature Center, at the mouth of the Mispillion River (in Delaware.)

When we arrived, the nature center was closed.  There used to be a lighthouse at the same general spot, due to its location at the mouth of a river.  We also knew the "lighthouse" in the traditional sense was gone, from the internet.  But there had been a steel tower with a light on it...and it, too, was now gone.  All that remained at the spot was a small pile of twisted metal....   Oops.

Like they say in the movies: "Nothing to see here, folks...time to move on."   And we did.

Next stop was to a place called Ship Carpenter Square, in Lewes.  Lewes is the location of the Cape May (NJ) to Lewes (DE) ferry.

The original Mispillion lighthouse had burned, because of a lightning strike.  When the carcass came up on a government property disposal list, it was purchased by a family in Lewes, dismantled, and made into a part of their residence.  We located the home, and though we couldn't get inside as it was a private residence in Ship Carpenter Square, at least I got a picture of "where the lighthouse remains live now."  It's wonderful that they've been preserved, and turned into something useful.

There's a story about the development itself - it was started around 1980 and is comprised of old (1800's) historic homes from the area, which were moved in and updated to be contemporary, while retaining as much historic charm as possible. 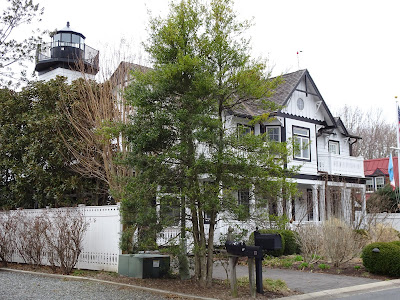 We'd say they did a great job!!  It's a lovely neighborhood of beautifully restored homes.  For what it's worth, a house a couple doors down the street is on the market now for $899,000.  Needless to say, we won't be relocating...LOL!

After finishing up in Lewes, we headed for Cape Henlopen State Park, a short drive away.   The park was actually getting crowded, so parking became an instant issue.   We got lucky, and found a place.  Not close to anything, mind you, meaning we were on foot for our sightseeing.   (Up to this point, my wife and I hadn't spent any time out of the car, so my attire was immaterial.  But no more.)

First stop was Fort Miles, an old WW2 fort which was built with watchtowers, searchlights, and huge guns to protect Delaware Bay against German attacks.  (Those guns were never fired in anger...)   The guns at the fort now are not the originals...but are indeed US military armament.  One of them (the one in the pic below) is reportedly a spare from the battleship USS Missouri, which could lob a shell for about 27 miles. 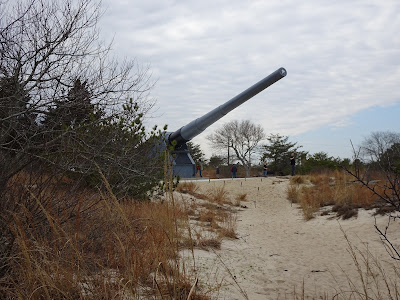 We strolled around the fort, enjoying the warm weather.  Clouds were expected to clear out, and they did...along with that came a 7 or 8 degree increase in temperature, up to about 73 degrees (it hit 76 later in the afternoon.  Everyone was peeling off layers of clothing.  My wife and I both ended up with our sweaters tied around our waists.   I noticed (and my wife said nothing about it) that the women were friendly, most smiling and some even saying hi to us. Both of us said "Hi" back (yes, I softened my voice a bit.)  Men were using "ladies" to refer to both of us.  "Excuse me, ladies." Fabulous!  I didn't hear any "dreaded S words."

Eventually we came to a trail that was supposed to take us to the beach.  It was a long walk - over 1/2 mile, but paved, and we persevered.  And it did indeed lead to the beach.   We found a sandy trail (off the paved beaten path and away from the direction others were going.)  So, my flats came off and I enjoyed walking barefoot in the sand, particularly notable because it was the middle of February and about 73 degrees.  (No, I didn't wear pantyhose that day...I figured I might end up on the beach, and having spent time with sand in my pantyhose before - it's not fun.)    The folks you see in the distance had come in by car, found a parking place, and used a different entrance to the beach.   We had "where we were" to ourselves.  Nice... 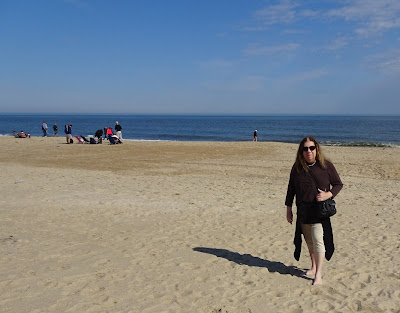 Eventually, after the above photo op, we hiked back to the car.  For some reason, the hike "from" a destination always seems to go quicker than the hike "to".  Even without walking faster.  And my wife was done with hiking.  She chose to stay in the car, while I hiked to the watch tower near our car...fortunately the one which was open.

The following picture was taken from the top of it..looking over at another "not open" tower.   On the way both up and down (both using the same set of narrow steps) netted me a lot of "excuse me, Ma'am," and smiles/small talk about the sights, from folks young and old alike...including kids, which was surprising. 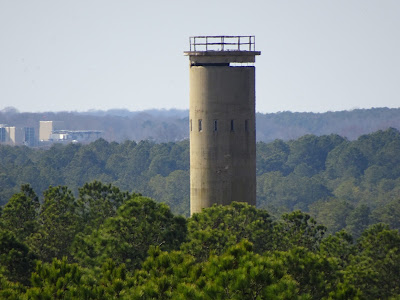 After I reached the car, we set off for downtown Rehoboth Beach (and the boardwalk), as neither of us had been there previously.  That excursion turned into a failure, due to very heavy inbound traffic.  Everyone was headed for the beach on such a beautiful day!  And I have a very low tolerance for waiting through three stoplight cycles to get through every intersection,  There's almost nothing I want to see badly enough to deal with that.  So we turned around, and stopped at the outlet mall for my wife (it was just as crowded), but I found a parking place near the shop my wife desired.  This time, I waited in the car.  She wasn't gone long, as the item she wanted was not on sale.

So, we headed for home, and plan to return when we can stay overnight at one of the hotels on the  boardwalk, so we can enjoy the beachy evening and morning sights...and leave before the outbound traffic gets crazy bad.

With another "quiet period" upon me, it's really tough to find ways to get out as Mandy...

I dress androgynously full time, so even when not presenting fully femme, I'm frequently addressed as female.   That happened again yesterday at Mom's nursing home.  As I was leaving, I held the door open for an old woman....who may only have been 55 but looked more like 75.  And she said "thank you, Ma'am."  I responded "you're welcome, Ma'am."  No strange looks or double takes.  The way it should be!   (And is, unless someone has issues with transgenders...)  There are a few of those...and that's when I hear "Sir".


I'm thinking about planning a solo shakedown day trip in my old car - this month or next, weather permitting.  And that brings to mind "wardrobe."  I need something unmistakeably feminine, but which can be put on/taken off easily without a dressing room.

What I'm contemplating right now is a pair of black "pedal pusher" capris and a turtleneck (gray, brown or black), with pantyhose and flats. That's my everyday attire, and with some light makeup, I can wear it directly from home.  I have a lightweight blue knee-length skirt, which I could take along, and slip into it "over the capris" in a cornfield after leaving home.  Leaving the capris on underneath, of course - that helps the outfit look like a fancy skirted capri.  Women wear skirted leggings all the time (and I love the look!).

I've seen ads for skirted capris (look them up on the internet!  Many sites have them - following is one of the many:  https://www.amazon.com/skirted-capris/s?ie=UTF8&page=1&rh=i%3Aaps%2Ck%3Askirted%20capris)  The outfit would look better with a black skirt, but the one I have really doesn't fit that well.  I'm watching the thrift shop for a new black skirt which fits better.

What do you think?  Will this look OK, with the turtleneck or as the weather warms, a women's short sleecve tunic-top?   Or I could wear one of the long skirts I have, over a pair of capris or shorts,  as I've done before. You've seen me wearing those in some of my other blog posts - picture below. 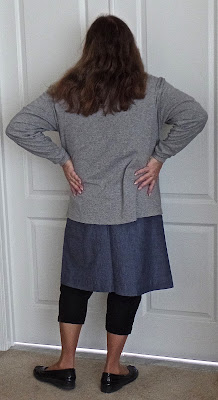 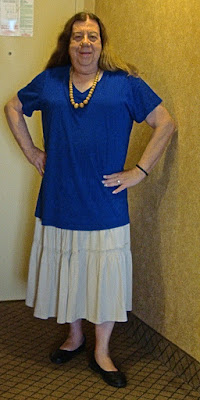 For the ferroequinologists out there, I've pulled a picture from my archives which may be of interest.  A date is not specified, but memory says this was one of the first Spanish Talgo (tilting) trainsets to be imported for service in this country, circa 1994. 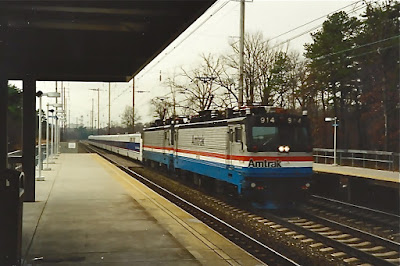 Taken at the BWI Airport Rail Station on the Northeast Corridor

To the best of my knowledge, the last of the EMD/ASEA AEM-7 locomotives (1978-2016) on the Amtrak roster (#914 is shown above) have now been retired from daily service, and one has reportedly been donated to a railroad museum in PA for preservation.   So the picture is notable for both reasons.

I'll leave you with a beautiful scene, taken from the shore of Lake McDonald, reportedly the largest lake in Glacier National Park.  It's more than a mile wide and ten miles long, and is a giant bowl surrounded by thickly forested, towering mountains.  It was formed by glaciers during the last ice age, ten thousand years ago. 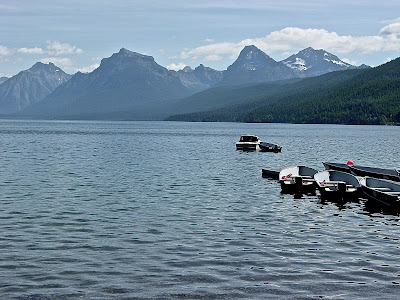 The picture, while pretty, doesn't do it justice.  The entire area was absolutely breathtaking.  If the opportunity to visit Glacier ever comes your way...just do it!  (Before all the ice melts...)

Once again, sorry for the delay in posting.  It's taken a visit to the doctor for me, and three for my wife, to get to feeling better from whatever it was that we caught on this trip.   I guess it's fortunate that we got home without major issue...things could have been much more complicated!

We noted some unusual billboards along the freeway...on I-40 eastbound, after Nashville and before Knoxville, if I remember correctly.   Unfortunately there are no pictures...there was way too much traffic and too windy (in both instances) to pull over and walk back a quarter mile to get them.

First billboard was a picture of an automatic pistol (big enough to be plainly recognized as such), with the words "Man Toys" in huge letters.    Down the road a few miles, there was another billboard, in bright pink, with a target showing numerous bullet holes close to the bulls-eye, and slogan "Shoot like a girl."  Neither of us noticed if they were ads for the same gun supplier...

Sexist?  My take on them both is: probably.  YMMV.   But at least they covered each traditional gender equally.  I wouldn't expect them to tackle the rhetorical question:  "What about us?"

We also made one last sightseeing stop at a roadside oddity, to see one huge pencil which adorns an office supply store in Wytheville, VA (alongside I-81.)   One could fix a lot of mistakes with it, given the size of that eraser... 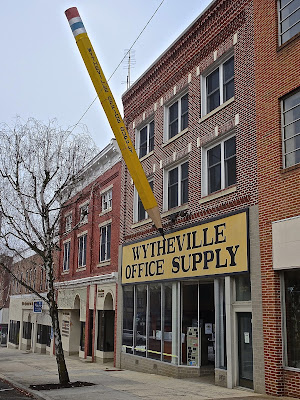 We were both glad to get home after this trip...