For a long time I’ve been wearing my same 4 pairs of flats. Day after day, every day of the week, one pair, then the next, and so on (except, of course, days when I have to wear my sandals.)  They’re showing definite signs of wear, beyond what having them polished can correct.  As in: the heels and soles are wearing down, and with one-piece soles, I can’t find a shoe shop which will replace them.  I keep hearing “No can do.”   Meaning: buy some new shoes.

I found a rather expensive pair of ballerina flats on-line.  They’re similar in appearance to the totally-worn out pair I save only for going into dirty circumstances away from home, such as car shows.   And I found a pair from a different manufacturer,  which also looked like they would work well.  Neither has the string "bow" on the vamp, which I would love, but suspect my wife would raise objections.   She didn’t take exception to my getting another pair or two of flats similar to ones I already have.  So I ordered them.

The expensive pair arrived just before my wife went west to visit her sister.  Cute ballerina flats, and unmistakably girly. 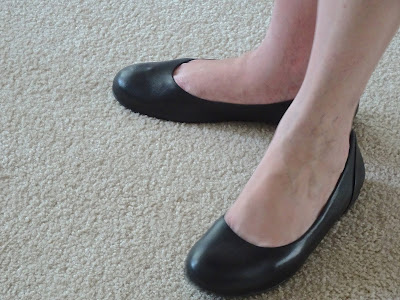 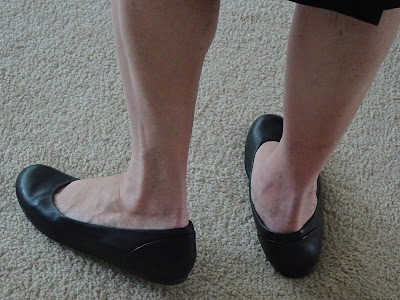 That short vamp shows a hint of toe cleavage, an added bonus which I've always liked, but never experienced, and wasn’t expecting it.  They’re so comfortable, that even if I didn't care for toe cleavage,  I’d happily wear them because they make my feet feel good (and look so feminine.)   When I modeled them for my wife, she didn’t take exception to either the style or the hint of toe cleavage.

The other pair arrived while she was gone, and either they were mis-marked or sized for foreign feet.  Not at all comfortable.  Back they go!  (Perhaps a case of “you get what you pay for?”)

I haven’t started to wear my “one new pair” yet…but I will soon.  And even though they weren’t cheap, if they work well, I’ll probably buy another pair.  Girly is good!

Mandy
Posted by Mandy Sherman at 2:38 AM 2 comments:

Today I was walking through a shopping center, not in the vicinity of my car (which is a 2018 Japanese brand with keyless ignition.)  My key fob unlocks the car with a beep when you touch the door handle, and it was out of its Faraday cage (yes, I keep it in one of those) as I was planning to get in my car and head home.   As I walked past a modern Kia, that car beeped at me and I heard a click...    So I pushed the "open" button on my key fob, and the Kia's doors unlocked.  Then I pushed the "lock" button and they locked.  Not wanting to stir any attention by setting off the horn, I pushed both buttons again and got the same responses.  Whether it was initially or not, I left it locked.

On the other hand, old-fashioned metal keys are not a fail-safe method of assuring that your car stays locked.  Back in the 1950's, my parents were shopping and returned to their car (or so they thought - same make, model, number of doors, and color.)  Their key opened the door and operated the ignition, so they got in, and drove off.   Dad reached up on the dash to retrieve the pack of cigarettes he had left there - but for some reason it was gone.  Then he looked down, and saw a clean ashtray and no floor mats.  His car had a full ashtray and floor mats.  They drove right back to where they had picked up the car, parked it, and found their car 4 spaces away (with cigarettes and floor mats intact.)  They were lucky the real owner didn't report it as stolen...and fortunately nothing more came of it.

I was later informed that there were only X thousand sets of key sets between each carmaker, so there were likely huge numbers of cars using the same keys.   But you had to work a little harder to find them...trying to stick your key in every brand X car in the lot is "kinda sorta" a give-away as to your intentions.

Moral of this story is: whenever your modern car is unattendcd and locked, it's still not safe.  Luggage or other belongings being stolen are the least of your worries.   (I could have cleaned that car out and re-locked it without a trace.)  And likewise, the owner of that car could do the same for mine.   It's also possible that the entire car  could just be driven off by a party with evil intent.   Wrecking the car and its owner gets blamed?  Conceivably.   Imagine the problems from the thief doing a hit-and-run - with the cops showing up at your door, guns drawn and handcuffs out!

Carmakers obviously need to make their systems more secure....   In the meanwhile, I'm not sure what the answer is for car owners...other than to pray nobody with evil intent walks by your car and hears your car doors unlock.

Mandy
Posted by Mandy Sherman at 9:54 AM 2 comments:

There are some new staff members – and residents - at Mom’s nursing home…as old ones are passing away.   Naturally, I hear “Ma’am” a bit more often than I usually have.   But that’s not a problem, and with Mom’s hearing (or more appropriately, lack thereof) it isn’t an issue for her, either.

I’ve been going to physical therapy for an issue, and was “Miss-identified.”  But there’s no doubt I had been clocked.  Their only male therapist interpreted me as a guy (still does) and addresses me accordingly.   I don’t challenge it – my records say “M” and he’s following that lead.  But their female therapists give me the same level of care, and refer to me as female.   Don't you just love it!?

Recently, for a visit to a new-to-me diagnostic center for a test I needed, the nurses referred to me as female, and even asked me if I would need a moment to remove my bra.  Of course I had to say that wasn’t necessary.   Very true statement…   As I checked out afterwards, the desk clerk finally figured out my real gender…but it took a while.

Wife and I were out and about on the Delmarva and came across this old bay window caboose, sitting off to the side of someone’s front yard, near the Delaware/Maryland state line.  My wife initially spotted it and we stopped along the road… 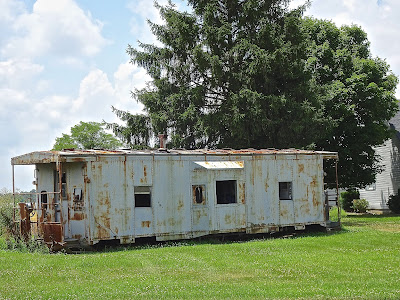 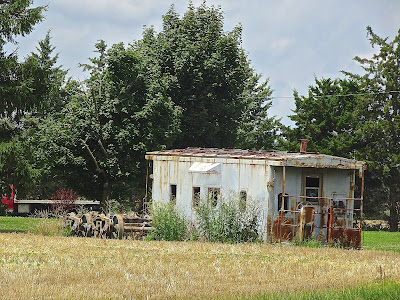 While I didn’t get close enough to it that I could look inside - where it’s likely the car number would appear (I was wearing my white slide sandals, which I chose to “not” ruin by railfanning in them), from the very faded green exterior color it appears to be a Penn Central cast-off.  The trucks which were sitting beside it, appeared to be roller bearing equipped, making it less obsolete.  (In modern railroading, “cabeese” (the plural of "caboose?") have become basically obsolete, regardless of their age.)

If any railfans read this and recognize the railroad from whence it came, or the caboose itself, please feel free to comment.

From the amount of iron oxide (rust) visible on the carbody and roof, (translation: rust) and the fact that the caboose appears to be sitting on dirt, this would appear to be a major restoration job.  But why do I have the feeling that one day in the not-too-distant future, instead of a restoration crew, the local scrapper will be getting a call?

Mandy
Posted by Mandy Sherman at 3:52 AM 2 comments:

Not to mention interesting…and add another first to the list.   Being on the downstream side of a dam during the opening of spillways due to flooding.

After driving over the Conowingo Hydroelectric Dam on the Susquehanna “westbound”, I followed some back roads to the visitor’s park just downstream from the dam itself.  I’ve driven US-1 over the dam (very narrow 2-lane public road on the breast of the dam) a number of times, but just found out about the park a couple weeks before the trip.  It has a fabulous view of the facility and the spillways (and for anyone driving a Tesla, charging stations for them!)

When I arrived on the property, first thing I noticed was a sign warning that vultures may damage cars…I saw a bunch of those critters, but they didn’t damage anyone’s car that I know of.  There sure were a lot of them, though…likely preying on dead fish, resulting from their trip over the spillways.   No need for vultures to strip the vinyl off convertible tops with the smorgasbord in the river… 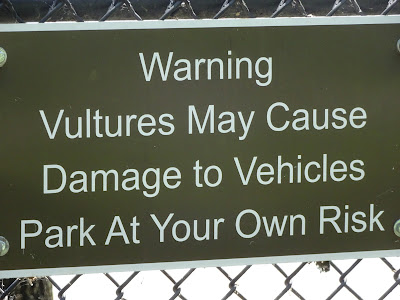 Once I found a suitable parking spot and got out of the car, I heard sirens going off…you don't hear much with the windows up and the AC running.  Signs everywhere revealed the meaning of this: more spillways were being opened to lower the level of the river behind the dam, due to recent heavy rains.  We were not required to evacuate, as it was only going to raise the water level below the dam a little bit. But this was definitely another first: being on the downstream side of a dam as spillways were being opened. 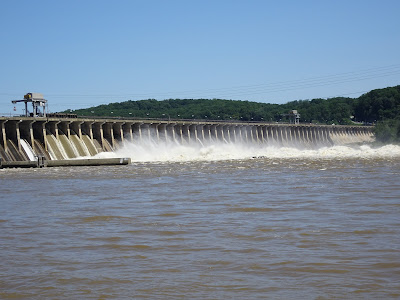 As you can see, a bunch of walkways were closed (below), with water already over them. 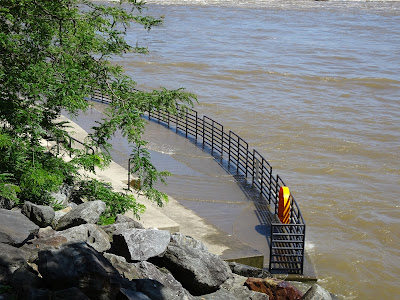 I walked as close as I could get to the dam, then headed back for my car - a fairly good hike.  Two ladies (not together, and at different times on my way back to the car), stopped me to talk about it.  (They must have seen me get out of it.)  "You have a beautiful car, Ma'am."  And each one talked with me for a few minutes.  Mandy was certainly lovin' it!

After getting back in the car and re-crossing the dam going east, my task was to hunt for a suitable cornfield to do a quick change back into white shorts, and out of my skirt.  No problem.  A lot of high corn in southern PA, so it didn't take long.   Done sadly, of course...

And a couple hours later, I was back home again...putting the car away after another wonderful trip.
And now I'm awaiting the chance to do it again!