With all due respects to the Four Seasons and their 1975 hit song "Oh What A Night,"  I can honestly say "Oh what a day - and night!"

My day started with a visit to Mom's at the nursing home.  But unlike my everyday visits, this time I wore a skirt and blouse, makeup and flats.  My first time in that venue!   I wisely chose flats over my Mary Janes, which I wore later in the day...   It had been so long since I'd worn them, that I found out later my gait was far from graceful.  (A little practice was all I needed.)

No, I didn't leave the house dressed that way...but I had purposely put the blouse on at home, under my polo shirt, and then wore a high-necked sweater to cover everything (made the cornfield change much quicker.   Sweater weather is very helpful!)

Once clear of the house, I found a back road so I could pull on my skirt and take off my stirrup pants.   My timing was perfect...once my shirt was off, leaving me in a blouse, and my pantyhosed legs were skirted and on display, the traffic started.  No way I could have changed back, even if I had wanted to...

On my way into the nursing home, I said a cheery Happy Halloween to everyone...   As it turned out, almost everyone - including the receptionist -  recognized me, but commented positively on my outfit - female staff and female residents alike.  A couple of older guys said hi after my greeting, but looked rather confused...like why did this girl get so girly all of a sudden.  But they didn't say anything.

And from the head of admissions, "Wow, look at those pretty legs!  I like...hope to see you look this attractive - much more often!"  My response was..."I guarantee it - next Halloween!"   She gave me a fake frown, then a big grin.

When I got to Mom's room, an aide was there, trying to convince her to let the aide put her "costume" on for the party in the afternoon - nothing more than a tiara with veil.  My entrance in a skirt proved to be a huge distraction, though Mom took it well.  And the aide asked her if there was something, like a witch's hat, that she might rather wear.  She fancied that idea, so the aide left and came back with a big brimmed, pointy black hat, which I actually was able to keep on her for part of my visit!  (But I doubt she went to the party at all, let alone wearing the hat!)

I took a picture of her, under much protest. But at least she didn't thumb her nose at the camera, like she usually does, and I have a decent picture of her.  For privacy reasons, I won't post it here.

Here was my own outfit: 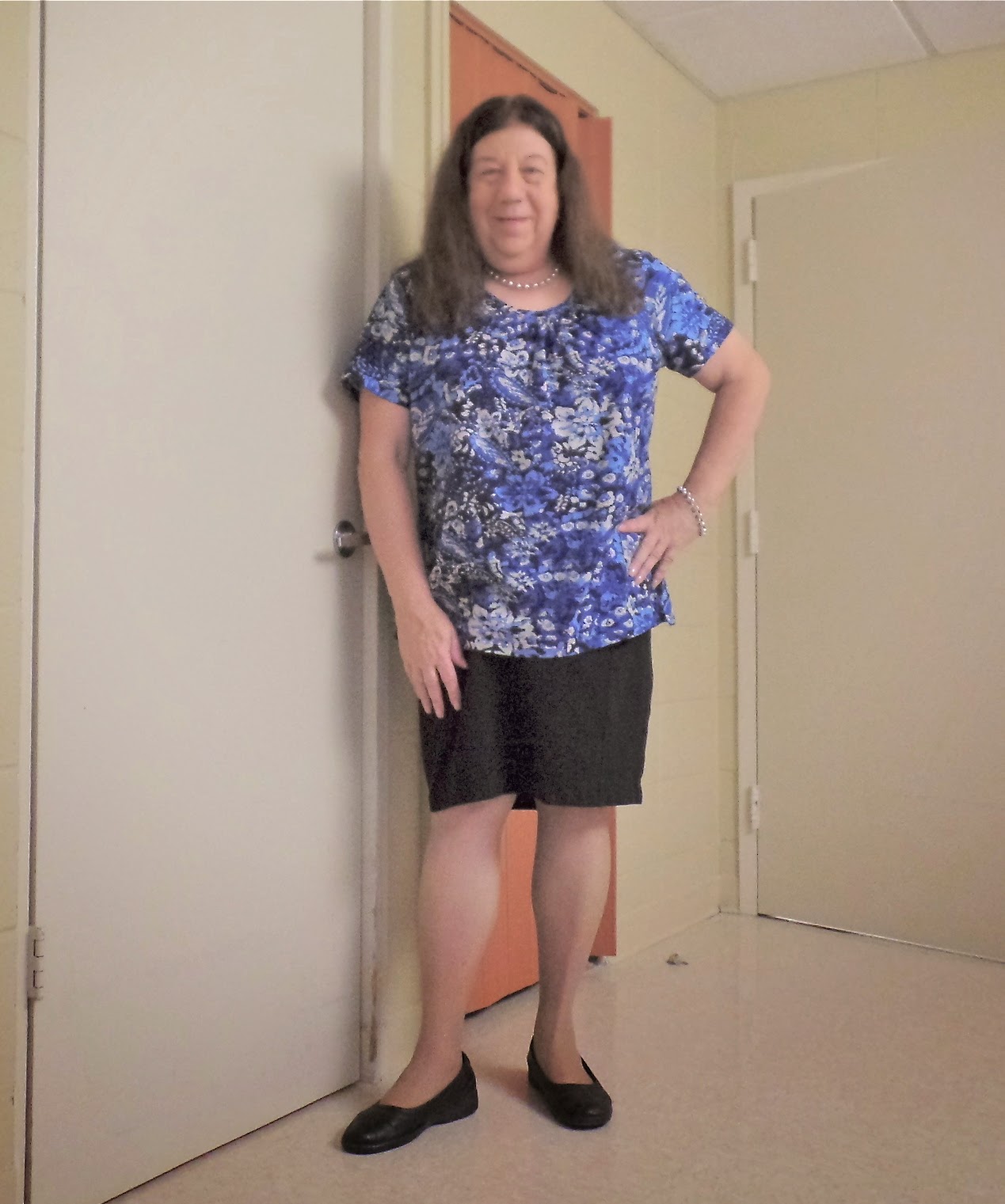 While I was visiting, Mom noticed my engagement ring and nails (including the broken one, which Miss J at the nail salon nicely repaired, now that it's healed.)  You can't tell that I destroyed it...and the pink acrylic matches my other nails perfectly.  The pink is probably a keeper!

The billing clerk was very enthusiastic...she's the one I had talked to about this earlier in the year.  After that discussion, she wasn't surprised that I dressed so girly.  But now she says I should look this pretty more often!

The woman who Mom eats lunch with, and who, months ago had asked me "What are you, a boy or girl?" again asked me "So what are you today?"   I laughed and said "Today, I'm Miss Mandy!"  The female staffer talking with her, told me that she's impressed, because she never wears skirts or dresses.  I couldn't resist asking "Why not? You'd look so nice in them."  Her response was - "Sweetie, I'm jealous - you look so much better in a skirt than I do.  My legs are awful...yours are so pretty!  You really should wear skirts all the time!"  I laughed and said "I doubt that, but thanks...and I really wish I could do it.  Maybe someday. But for now, as soon as a restroom opens up, I have to change."

On my way out, everyone was encouraging me to change back to my skirt and stay for the party.  Unfortunately, that was not to be.  I was off to the sale.  But today I wore my stirrup pants, pantyhose and flats, and was anxious to see if I got any comments.