"Wonder if they're still standing?", and "Answering the door..."

When I made my California sojourn in April of 2017, I came across many areas with pretty and green foothills, such as shown below.    While I can't say precisely where along the PCH (Pacific Coast Highway) these pictures were taken, I can say that I wondered if the plentiful growth in the area might have a downside at some point.   And the fire events in CA over the last few weeks/months have proved to be that downside, providing plenty of dried out vegetation as fuel for the conflagration. 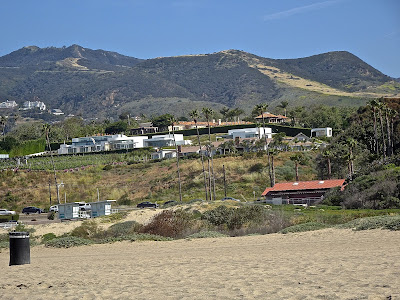 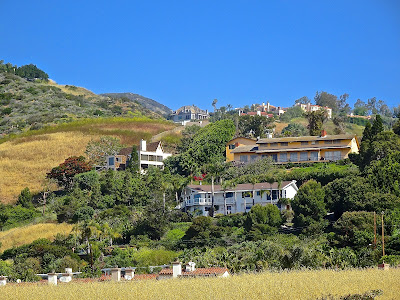 Do these beautiful homes still exist?  Since I can't say precisely where these are (other than along the PCH, south of Point Mugu),  I don't know.  But what I do know is that my thoughts and prayers go out to the many CA folks who have been affected in the California fires.   It is a very sobering situation...and may those affected receive all the help they need.

On a more pleasant note:   While my wife was chatting with her sister on the phone just before dinnertime the other afternoon, our doorbell rang.   She wasn't going to be able to get it.  So she motioned to me to answer...we've been getting packages delivered, and for some reason, the delivery drivers do not knock or ring the doorbell.   With all the talk about porch pirates...it seems to me that if the delivery companies can't take the few seconds to knock or ring the doorbell, they should have to pay for any stolen packages.  But that will likely never happen.

Before you ask:  Here is the outfit I was wearing at the time - not at all masculine.  Quite feminine, in fact. But I was wearing no jewelry or makeup. 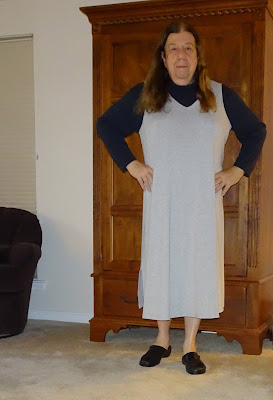 I opened the door, fully expecting to find a delivery driver.

Was I ever surprised (actually, shocked) to find our next-door-neighbor's wife.   I invited her in where it's warm, and she entered.  I told her that my wife was on the phone with her sister (and she could see that was true, from the foyer.)  We had been watching their house while they were gone, but they got home a day early cause her hubby had gotten sick (whatever it is, it's still going around.)   I gave her their packages, and she headed home.  But it was an amazing outing - without even trying.  And I didn't notice any strange looks or double-takes.  YAY!

This is the same neighbors who said hi to me (as Mandy) in a restaurant on the other side of the bay a couple years ago.  So, now it's even more certain to them that I wear dresses...for whatever that's worth!  And my wife didn't seem concerned about it....I'll take that as a good sign.