Old cars are so exciting... Plus a note about pantyhose.

Having been very much "under the weather" the past week or so (requiring a doctor visit and lots of pills), I haven't been able to get the old car ready for its trip to the shop to have the heater core repaired.   And that is where the title of this post originates.

On both of this past summer's trips, the car ran perfectly (well, except for the leaky heater core issue, which was temporarily solved by bypassing it.)   Not bad for a 50 year old vehicle with 140K miles on the clock. After arriving home in September, I parked the car and it hasn't turned a wheel since.  In fact, I never even washed the dead bugs off the windows!

The day before taking it to the shop, I decided to start it up and make sure it was ready for the run... since the shop is in another town.   No problem with starting it up, that worked as per normal.  But as I backed down the driveway for a test drive (and toward the neighbor's truck parked on the street behind it), the brake pedal went all the way to the floorboard.  A bit un-nerving  - good for a couple of skipped heartbeats!

Fortunately the front  brakes grabbed just as I fully applied the parking brake - and together that stopped all movement.    I drove it back up into the garage, which is level, and tried pumping the brake pedal to see if things would get back to normal.  No such luck.  So I checked the brake fluid level in the master cylinder..   One of the two halves was full (i.e. the front) and the rear half was very low.  Hence no back brakes, and not safe to drive.

I topped up the brake fluid, pumped the pedal again...and it soon returned to normal.  So after letting things sit a few minutes, I checked again and found the brakes were still normal.  I backed out of the garage and took a short test drive, which was completely uneventful.  When I got back to the house, there were no puddles anywhere under the car, in the driveway, or streaks of leaking fluid on the road.  Very curious.

I'm confused as to why the brakes worked perfectly fine in September, but now in November the fluid is very low, with no tell-tale puddles under the car, and no driving.   The fluid could not have leaked elsewhere, but it was low.  I hope the mechanic has an idea or two...

An interesting "happening" during our recent trip out of town for a family wedding:  my wife commented that we needed to find a store so she could buy a pair of pantyhose - all she had in her suitcase was a pair of black tights.  The day before the wedding, when the weather was dry, we didn't go shopping at all.

Now, before lunch on the day of the wedding, it was raining...and I didn't care for the idea of going out.  Neither did she.  I pointed out the fact that we're about the same size, and offered to lend her a pair of my pantyhose.   Most surprisingly, she accepted.  I was shocked...though it may have had something to do with the fact neither of us really wanted to go out.  But the bottom line is...she wore them and they worked fine.

Let me leave you with a picture or two of the wild blue yonder... 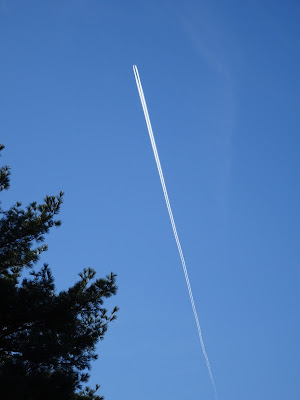 Nice.  A beautiful contrail...with no wind to break it up. 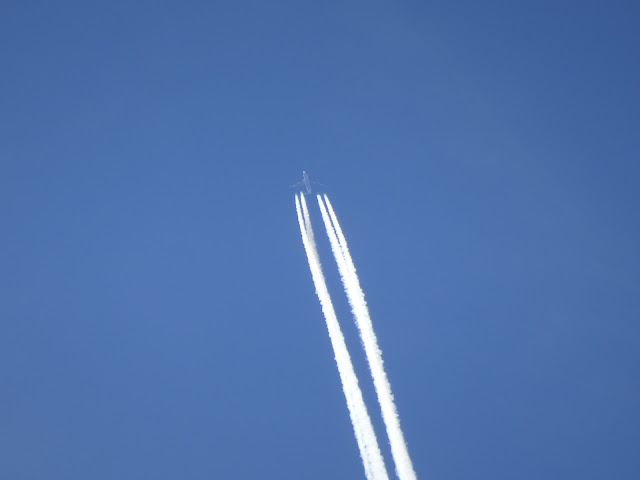 Wonder what the airplane was, and where it was going?  We'll never know...but it sure made a beautiful sight!