Thanks to my Readers! And "Another railroad landmark gone."

I just noticed that my blog has recently reached a new milestone.   Now there are more than 100,000 visits/comments...which is a figure I never dreamed would be reached.  Thanks to each and every visitor/commenter, for helping me reach this level.  I intend to continue this blog, though life unfortunately gets in the way of making entries on a daily basis...

While recently showing my mother some old pictures of Pittsburgh, PA from years gone by, I came across the following, which are pictures taken among a group of fancy privately-owned rail passenger cars.  They were gathered at the B&O's Grant Street Station, a stub-end facility intended for local passenger train use.  I was fortunate to be able to access the station and see the equipment gathered there.

A few words about the Station:

It was built in 1957,  for the then-still-operating Baltimore and Ohio-operated commuter trains from downtown to some of the Monongahela Valley suburbs, such as McKeesport.  And reportedly it was the last privately-owned station built in the State of PA.

It was designed as stub-end: the end of the line.  All trains departed in the opposite direction from whence they entered.  There were no through tracks.  Though there was a freight station, I understood that freight business was not particularly plentiful, as there were no through trains, and no big freight yard, mainly a few open tracks and some passenger platforms with shelters.

All of B&O's intercity trains used the existing Pittsburgh and Lake Erie Railroad station, which could be seen across the river.  (Which eventually became part of Station Square, now a major convention and tourist attraction in the city.)

When the B&O finally discontinued its commuter trains, Pittsburgh's Port Authority Transit agency took over some of the runs (locals may recognize the PaTrain name), thus keeping the station in business.  But as the B&O had previously found, passenger traffic continued to dwindle due to the death of the steel industry, making the trains hugely unprofitable and a burden to the local budget.

The only exception to that was a spike in patronage during road construction on the interstate leading into town, when special trains were operated to alleviate highway congestion.  But when the construction ended, that patronage disappeared.

These pictures were taken at the station in the mid-1980's, during its declining years, when a bevy of privately-owned rail cars gathered for an event.   Note:  in the pictures you can see a number of yard tracks and adjacent buildings.  More about this later. 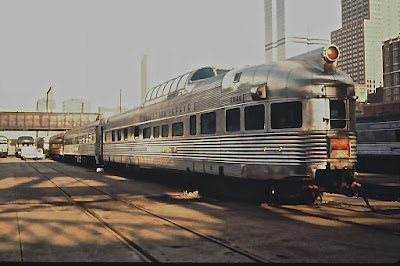 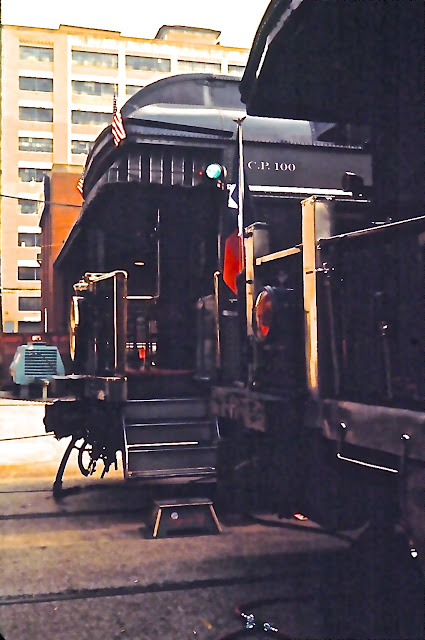 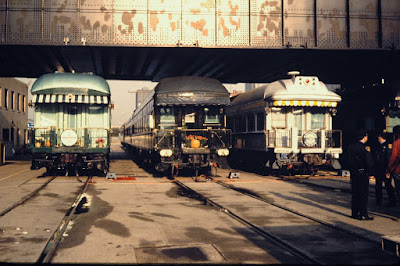 A very interesting day, savoring the ambiance of times gone by...

By May of 1989 the PaTrains were gone, and the station lay dormant.    Here is what it looked like from the outside...very "mid-century modern" in style: 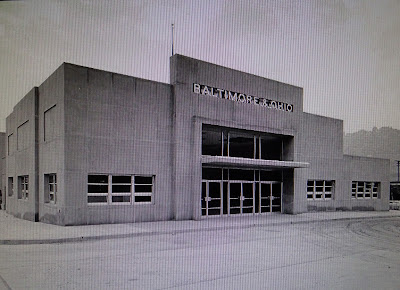 I had been aware that the station was disused, but recently heard that in 1998 Urban Renewal finally caught up with it.   Both the passenger and freight stations, and all the yard and tracks visible in the pictures above, fell prey to the wrecker's crane.   By going on Google Earth, I see that there is now some high rise establishment (titled "PNC First Side") located on the site.   As far as I can tell, there is nothing visible that even hints of the fact trains used to run there.

How the once-mighty have fallen!

But the bright side is that most, if not all, of the rail cars in attendance are still alive and well...unlike the station and yard areas.

"Happy Rails to You!"

Posted by Mandy Sherman at 2:09 AM