It was a weekend, and a very nice one at that.  (Sorry about the delay in posting.)

With that in mind, I wasn't planning to get involved with bridge traffic either day, and had arranged enough time to make a sightseeing trip (following quiet rural roads) to some "new" areas for me.   And, dressed in my tan tiered skirt, sandals and pink floral blouse, I was going en-femme.

As you can see below...there was very little traffic on those rural roads... 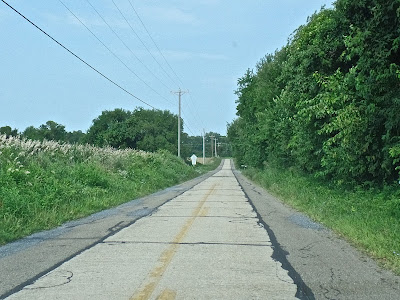 First stop was a little town named Betterton.  There was nothing in particular calling me to that destination.  But the name itself was intriguing.  It's a small town at the mouth of the Sassafras River on the upper Chesapeake Bay.  And with a population of 345 in the 2010 census (per Wikipedia), it really is just a dot on the map.   Turns out there are a number of Victorian buildings built in the late 19th and early 20th centuries as hotels to cater to the passengers of the steamboat trade.   They have a very nice small beach, which was crowded because of some local event.  And with no place to park, I didn't get to rub elbows with the residents...

After checking out the town, I headed for my second destination, coming across a historical marker for the Battle of Caulk's Field, dated August 31 of 1814, part of the War of 1812.  After the burning of Washington, the British sent troops north in the bay to keep our militia from moving south.  But an American militia numbering about 150 engaged the 200-300 British troops, handing them a decisive defeat, with many British killed and very few Americans injured, none killed.   This monument, in front of what is now a corn field, honors the soldiers of "both sides..." 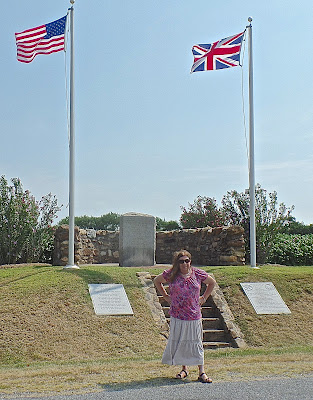 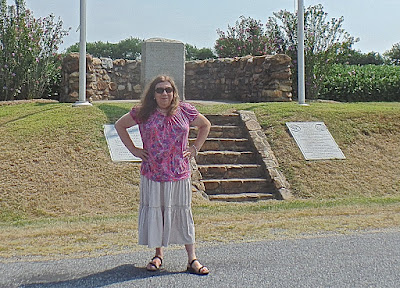 From there, it was on to Rock Hall.  The town was established in 1707, allegedly named for a mansion made of white sandstone, and incorporated in 1908.   Rock Hall served as a shipping point for tobacco, seafood and other agricultural products, as well as a passenger transport connection for travelers during the Colonial era.   It continues to be a working harbor, with an active fleet of commercial watermen who leave the dock each day, and a population of 1,310 as of 2010.

Interesting little town, where I was able to park, walk around a bit, window shop, and grab lunch at one of the local eateries - a sit-down restaurant, not fast food.  Don't look for a Mickey D's or Burger King here...I didn't find any!  My only interactions with others were in Rock Hall, and all were good.  While walking about, there were no occasions for speaking with the locals, but I didn't notice any unusual double takes or comments, including as I walked by several groups of three or four adults who were standing in front of establishments and chatting.   In the restaurant, it was "place your order at the counter and we'll bring it to you."  Nothing in the conversation required a gendered greeting or response, but the folks there, and the customers, were friendly, even with me in their midst, and on a first-name basis.

The female clerk/waitress, a female customer with two little girls and I were carrying on a casual "women's type" conversation about the cute little under-4-year-old girls (who were climbing about on the chairs, just like two boys.) There was no reaction other than "normal" to my female persona (including from the little girls.)   And remember, this is very conservative, card-carrying-Republican countryside.

So, today's event leads to one of two conclusions:

1.  I "passed" well enough overall, that nobody took exception to me. (There's that word "pass," which I hate, but can't figure out what  means the same thing, in so few words...)  Since I didn't hear "the dreaded S-word" at all, and since the little ones didn't make an issue of my gender (typically nothing escapes kids), then it's within the realm of possibility...

I'd like to think it was the first - my beard shadow wasn't showing,  my makeup was intact (despite the heat),  I worked on my voice a bit, and I watched my gait and table manners.  But reality rears its head, to remind me that it could be the second as well...     Fortunately (or unfortunately), I'll never know.

When "the party's over," it's always a long drive home.  But there should still be time to squeeze in a couple more of these little excursions before my wife gets back.  Her arrival will once again restrict this type of touring - especially leaving directly from the house.  But I miss her so much, that I'll be glad to have life "as it was" once again, before she had to respond to her sister's medical emergency.