Here is a picture of my repaired earrings "in use."  I absolutely love the elegance of this pair.  They look like they ought to be worn with an evening gown (maybe someday!)   Even though they're costume jewelry, Mom had good taste to select and wear them.  The way they feel as they swing with my movements is almost intoxicating.  (I wonder if she enjoyed wearing them as much as I do?)  Speaking for myself, I wish I could wear them all the time.

I put them on at about 7:30 AM.  They're still a bit of a challenge to secure...guess I still don't have the right hand movements figured out.  But they stayed in place until about 12:30, when one of them fell off in the car.  So I guess I need to have them tightened up a bit more.   They were still very comfortable, though. (Perhaps TOO comfortable!)   I'll have to try again...and tighten them a little more.

Now for a shout out to Pat: many thanks for the recommendation about this type of attachment.  If you hadn't mentioned it, I might never have discovered how nice they are.  I will be down looking through Mom's jewelry for another usable pair, sometime over the weekend... 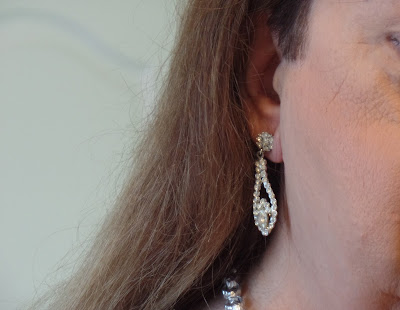 The finished product, with missing stones replaced, as worn on 7.30.15

Added on Saturday, 8.1:  I sifted through Mom's clip-on earring inventory, and have now found 3 additional pairs, which are wearable AND in good shape.  Two are silver-tone, one is gold-tone.  One has the screw-on clip, the other two are spring-loaded.   I've been wanting to wear large hoop earrings but could never find a style I like.  Thanks to Mom, that's not a problem any more, except for the fact that I now need to find a necklace and bracelet to go along with the gold-tone 1-3/4" hoops.  Retail therapy is always good...

Here are a couple of pictures... 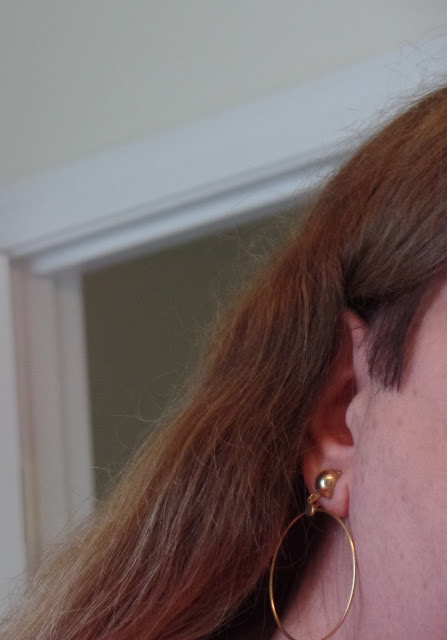 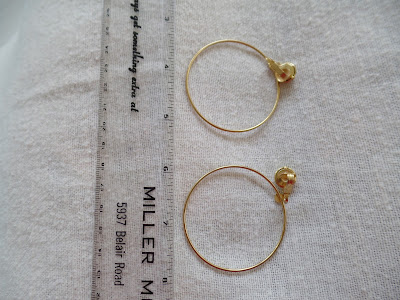 What do you think, Pat?  Will these work style-wise?

Stopping at the NASA visitor center on Wallops Island, VA has been on my bucket list for some time now.  It's the site of a growing number of launches - and on clear nights the fire from the rockets can be seen from my house as they ascend, even though over 90 miles away.  My wife has no interest in this stuff, so it proved to be a good time to make the run, without boring her to tears.

I won't describe my outfit, since you can see it below.  But even with full makeup, lipstick and jewelry I was quite comfortable on a hot day.

The visitor center was my first stop. That was interesting, but nowhere near as elaborate as what I've heard is at the Kennedy Space Center.  My feminine attire was appropriate.   Many women - and some girls - were in skirts. (Or sundresses...maybe someday I'll get brave enough to try one of those!)  It was a fabulous place to be seen by a number of visitors, many of whom were kids.   Continuing the pattern of the last few days, I didn't notice visitors of any age staring at me...including the kids.  I really enjoyed being accepted as "just another woman out sightseeing."  And truly enjoyed spending more time in skirts.

It was a tough environment to get any selfies...much too crowded, and I didn't have access to my tripod anyway.  So I didn't worry about it, and moved on to the next stop, which was a turnout on the causeway to Chincoteague Island.   The only problem here was the wind, which kept blowing my hair into my face...but I'm used to that! 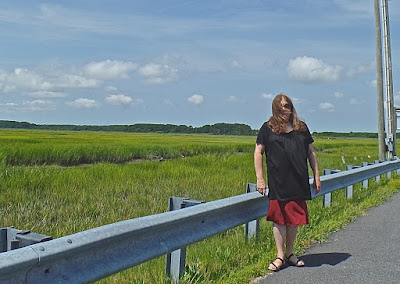 Wetlands beside the causeway to Chincoteague Island,

On my way into the beach on the island, the lady at the ticket window addressed me properly, as did one of the rangers directing people at the beach parking area.   I stayed up on the poor-excuse-for-a-dune where there weren't many people, and I didn't hang around for more than 15 minutes. But with pre-teens and teens arriving by the car/truck loads, and walking right past this overdressed (for the beach) older woman with a camera on a tripod, you'd think at least some would have stared.  Big sunglasses over my contact lenses let me keep an eye on the kids, and they weren't at all concerned about my gender (or presence).  No one gave me so much as a casual glance. 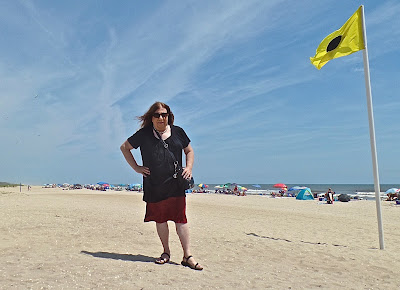 Mandy, standing on the poor-excuse-for-a dune, more than a little overdressed for a visit to the beach (Tom's Cove on Chincoteague.)

My drive home was anti-climactic, and I was able to get the car into the garage without seeing anyone.  It was another fabulous day...    But, does anyone know what the yellow flag with the black dot means?  Just curious...