If "things" could talk...the Sixties again? 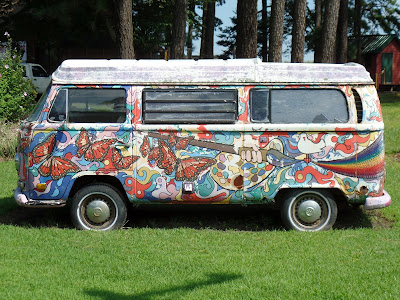 I do...from the 1960's and '70's...love-ins, teach-in's, protest songs, beach music, with many folks experiencing  summers of fun living at the Pacific Ocean in these vehicles.  No, I didn't own one, and never rode (or lived) in one.  But they were everywhere in the Bay Area, where I lived at the time.  (And contrary to popular belief, that's not where my long hair started...)

Some of these had their back window removed, to make it easier for surfer boys and girls to stow their boards.  This one is on the Delmarva in Maryland, and still has its back window.  But no license plates, so I wonder where it came from?  Who drove it?  Where has it been all these years?  What sights has it seen? 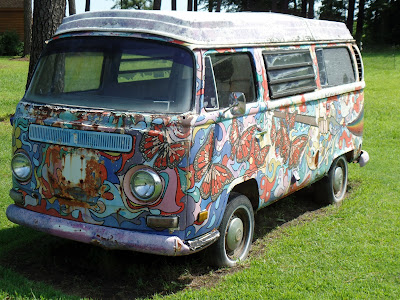 Might even be fun to drive one of these as as an antique...lol!

Speaking of antique cars...today I stopped in at the auto parts store to get some wax and motor oil for mine.  When I arrived (dressed in my women's white tank top, tan 3" inseam shorts,  freshly epilated legs with new sandals, and my purse - plus pink toenails and shiny long fingernails), a fiftysomething guy pulled up in a really pretty Dodge Dart GT, 1969 I think (sorry, not so much into Mopars).

My comment to him: "Really pretty Mopar you have there."  He mumbled something back at me from about 20 feet away, but I'm not at all sure what it was that he said.  For all I know, it could have been "What the h*** do women know about antique cars anyway?"  OK, so no conversation were going to be forthcoming with this guy...  He let me go through the door first, then walked into the store behind me, stood at the door for a minute, looked in his wallet for something.  And then he left...as abruptly as he entered.  His car was obviously the most personable part of THAT family...

I found the wax I needed, but had to summon help to find a quart of conventional organic Pennzoil  for my antique.  The back story on that: seven or eight years ago, a quick-lube place (yes, you'd probably recognize the name) slipped synthetic in my antique unbenownst to me (grabbed the wrong hose when filling it, but later denied it and hadn't charged me extra for it).   Shortly thereafter, a spaghetti strainer would have held almost as much oil as my engine.  I was advised that a lawsuit would most likely had unsatisfactory results, particularly with no paperwork to prove they actually did anything wrong.  Their probable defense would have been - "it's a leaky 40-year-old clunker, and they're trying to pin their problems on us.")  Stop-leak, regular oil changes, and several "engine washings" finally eliminated the leaks, and their visible evidence.  And it's been dry ever since.  But never again will I risk getting synthetic oil into that 130K mile un-rebuilt engine...I even carry my own spare oil in case it's needed on a long tour...not every convenience store gas station stocks old fashioned oil. (Been there, seen that issue.)

In my opinion, with an antique car, the key is:  "know thy repair shop well" and only have them do oil changes.    Using quick-lube places is not worth it.  They often have novices working there, which increases the risk of "accidentally" ending up with the wrong oil, and subsequent leaks.  BTW, my new cars began their life on blended synthetic, and they're perfectly happy using it.   No leaks, no issues.  Thus, my opinion ONLY applies to un-rebuilt, high-mileage antique engines.

Thanks Mom and Dad!!!  Their "foresight" undoubtedly made this possible.  Though somehow, I can't believe they ever envisioned that their transgender child would be recognized as a woman in her daily life...using that name.  I'm sure that's not quite what they intended!   But I'm certainly not complaining...
Posted by Mandy Sherman at 9:20 PM