Recently,  I was away from home on what might be called a "boys' weekend out."  Though there were actually some women attending with their husbands.   One of our friends from out of town had his 50th birthday, and as a celebration for his friends, he arranged a special get-together at a local railroad, something I was looking forward to attending.  And my wife, who was enjoying finally being back home after her long visit with her sister, was the one who generously suggested that I go alone.

The celebration involved a lot of being outside in the sun and the heat...mid to upper 80's and low 90's.  As Marian can attest, such temperatures are enough to cause lots of problems.   For me, the major one as a boy, was/is perspiration, which can tend to make my long hair get stringy and ultimately, unmanageable in hot weather.

Enter the ponytail, and the use of a number of bobby pins to hold loose short fringes of my hair down comfortably.  (This is the same technology used by my wife at our son's wedding a while back.)  Reluctantly, I styled it that same way, and put on my masculine persona - denim (women's) jeans and polo shirt, with loafer flats or when needed, ankle boots, great for walking on ballast without twisting an ankle.  Admittedly that outfit was not the ultimate in hot weather comfort - a skirt and tank top would have been much better.  But jeans were appropriate for the festivities.

Not surprisingly - the difference in my appearance was substantial.

Everything I wore was "women's clothing."  I was carrying a purse, and wearing long nails and a higher ponytail than typical for a man.  Yet, not once was I addressed as "Ma'am."  Everywhere I went all weekend while so coiffed (and with absolutely no makeup), everyone who didn't know me  identified and addressed me as "Sir."

Once my hair gets damp while in a ponytail (about an hour in the heat is all it takes) I'm stuck with it that way till it's washed...   So, being in "boy mode" in the morning heat, meant staying that way all day. (Ugh.)

It was a surreal experience, and I almost felt as though I was being "mis-gendered" -  being addressed as female has been so frequent.  Even the name on my credit card was of no assistance for this weekend...   But around these men (and their wives, some of whom have known both my wife and I for years),  being Mandy just wasn't an option.  Thus, I had to deal with it.

And yes, I had a good time, in spite of being stuck in boy mode...including some sightseeing en-route to/from the venue (which on the way home after checking out of the hotel, made girl-mode possible once again - though with shorts instead of a skirt.)

I made a sightseeing stop at Paw Paw, WV - the location where the B&O's double-tracked, original water-level line along the Potomac was removed years ago.  The right-of-way was fully cleared of any hints as to railroad history (it was "scorched earth"- not even foundations were visible), and is now used as public access to reach remote riverside campsites and isolated properties on the line.

A friend and I had driven the entire low line in a 4WD many years ago, and my wife and I had visited Paw Paw previously, but we didn't venture down the right-of-way.   This time, I did, but not very far.  In the short distance I traveled, (probably not much more than a half mile to the first turnout), given the size of "car-eating" water-filled craters along the way, it was obvious that the road needed some grading.  While 4WD wasn't really required, a heavier suspension would have been good.  I stopped for the obligatory picture, and turned the car around... 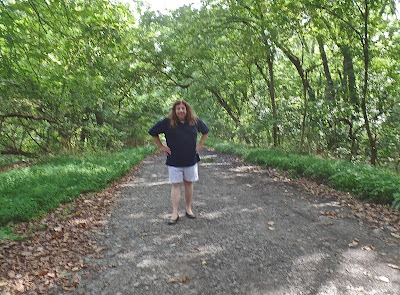 It's hard to imagine that the B&O's blue-and-gray passenger trains used to run through these sylvan glades....

Posted by Mandy Sherman at 1:42 PM