...the opportunity for my wife and I to spend some time visiting at a timeshare in Maine with my cousin and her hubby?  (Even though it meant no chance for Mandy to be out and about fully dressed)?   Not me, and not us...

During our other excursions this fall, we had chased from MD to NH to TN, finding very little of the annual leaf display.   We were too early - the warm, dry summer seemed to delay onset of the leaf change.  Even now, as I write this (early November), some have changed, but there are still trees with green leaves here on the Delmarva.   Pre-booked tours for "leaf peepers" may have had many unhappy customers this year, because of the late autumn..

Our train trip north from Baltimore to Portland was uneventful, and with the help of a rental car, we caught up to my cousin north of Portland the next day.  And voila!  There it was...in downeast Maine, the annual marvel of autumn colors!

While traveling or dining with the relatives, I was mostly "Sir" or "no gender reference used", despite my outfit of stirrup pants, women's turtlenecks, flats, purse etc.   One big exception was servers letting the women order first - and when the server asked for my order, I just gave it to her, not worrying about it.

For the time traveling with just my wife, it was mostly "no gender reference" or "implied female."   Curiously, I didn't hear much "Sir" when traveling with her.

I'm going to include a few pictures here from our travels, with comments as appropriate. 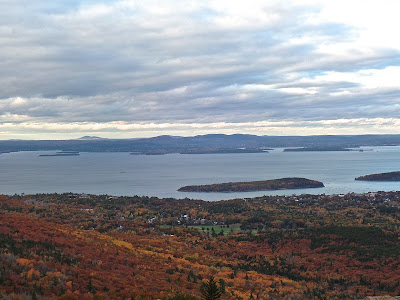 View from the top of Cadillac Mountain. 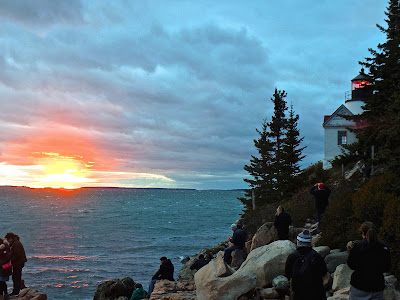 Sunset at Bass Harbor Light...lighthouse hiding in the trees on the right. 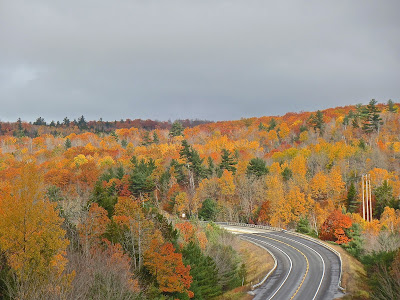 Route 1A between Ellsworth and Bangor 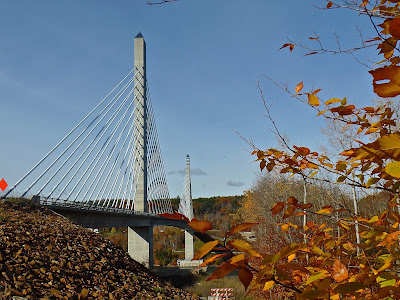 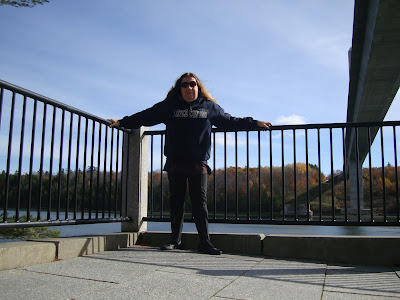 Mandy underneath the Penobscot Narrows Bridge. 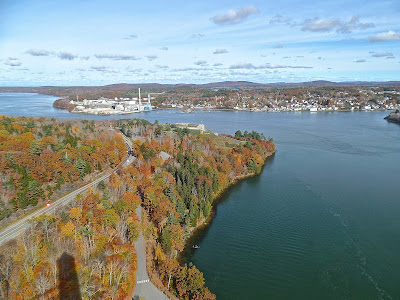 View from the Penobscot Narrows Bridge observation deck...   This is a view of Bucksport, Maine, including the large paper mill across the river in the left center.  That mill was recently shut down, affecting many in this small town. 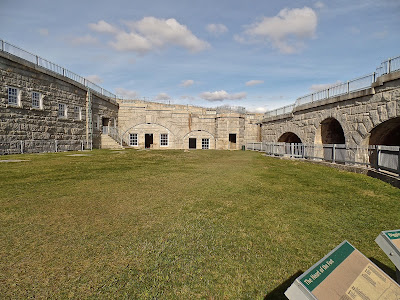 Fort Knox, across the river from Bucksport, Maine.  The fort was named after Major General Henry Knox, America's first Secretary of War and Commander of Artillery during the American Revolution.  America's other Fort Knox (in Kentucky) was also named after him.  Nearly a million dollars was spent to build Fort Knox.   Appropriations were sporadic over 25 years starting in about 1844.  When work finally stopped in 1869, it was still not completed.

The fort saw two periods of military activity.  Up to about 54 troops were garrisoned there during the Civil War..  As the fort was still under construction,, they lived in temporary wooden buildings behind the granite structure.   Nearly 600 troos from Connecticut lived at the fort for a month during the Spanish-American War.  They lived in tents outside the main structure.  No enemy shis ever appeared on the Penobscot, or threatened its towns during these wars. 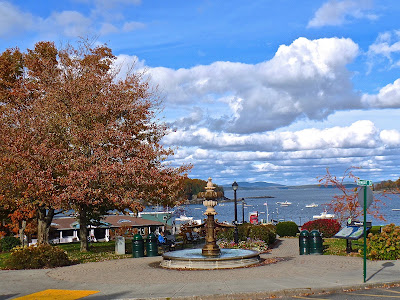 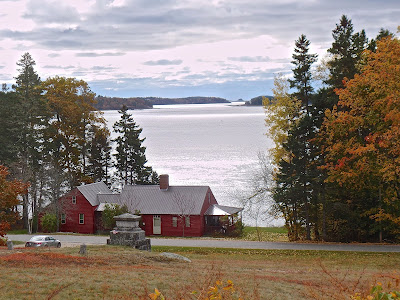 Along Route 1 north of Ellsworth, Maine. 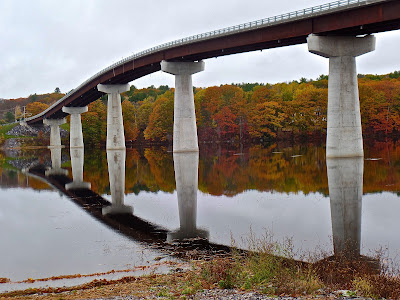 The new (Dec 2014) bridge over the Kennebec River, linking Richmond and Dresden, Maine.  Picture was taken while standing on the "now" boat launch, which appears to have been the old bridge's access road.   Bridge is tall enough to clear the masts of local sailing ships...thus avoiding installing a lift bridge and paying a full-time bridge tender for the next 100 years.

When taking the train back to Boston on the way home, it was necessary to change from the Amtrak Downeaster, which arrives at Boston's North Station, to the regular Northeast Corridor trains at Boston South Station.

Hired help from the Boston MBTA (the "T" in local terms) directed us out a particular door to find a cab.  But there was no cab stand, and no cabs.  Not one...   Construction in the area may have eliminated the cab stand we had used in our previous visit there a number of years ago.  After hauling our bags all the way out there (we did not "travel light"), my wife was quite dismayed, and a more than a bit cranky about the possibility that we might have to haul our bags back into the station.  (For those who live in Boston and want to tell us that the T is quicker and cheaper:  Yes, we know it's only a short T ride from one station to the other.  But we just wanted to get there...without being "old dogs learning new tricks" while hauling our bags.  The cab was best for us.)

I looked up - and what did I see coming down the street toward us in the far lane?  A beautiful sight  - a vacant cab!  Wonderful!   Having never before hailed a cab the big city way, I emulated "Tootsie" in the 1982 movie of the same name (starring Dustin Hoffman, who played a lousy actor who had to crossdress to get a part in a third-rate soap opera).  Too bad I wasn't wearing a dress...

Taking the lead,  I jumped out into the street and raised my arm.  The cabbie flashed his lights.  When the light turned green  he burned rubber around traffic and pulled in to pick up his 2 fares.    "Where to, Ma'am?"  That cab was a Godsend. Even my wife was thrilled that I got us a cab that easily...and it didn't seem to bother her that the driver thought I'm a woman.   We both reaped the benefit. Why argue prosperity?

Now for the question:  was our driver in fact responding to two women (one at the curb with short hair and in jeans and sneakers, and one in the street with long - feminine - hair, in stirrup pants and flats, with visibly bare ankles and a purse), or to a man and a woman?  Or did he just see two genderless customers?  Don't know for sure...but I suspect the former.  If he recognized my physical gender, it didn't matter to him.  Money beckoned...

Whichever was his reasoning, he got a nice tip from this girl...he appeared at just the right time to de-fuse a looming issue with my wife, who was grumpy and exhausted from over a week of traveling.

And after getting on the train for Baltimore, we relaxed as the Conductor checked our tickets:  "Thanks for traveling Amtrak, ladies."

A great end to a fabulous "androgynous excursion..."

Posted by Mandy Sherman at 6:00 PM