This show is always a fun event...

For the second day, I dressed in a different version of my stirrups/pantyhose/turtleneck tunic outfit, and decided against wearing socks over my pantyhose.  It's time to let a little bit more of Mandy show, for everyone's benefit.

With attendance (and sales) way down, I somehow managed to time my two restroom visits so that nobody was around...thus no issue.  And I only heard "Ma'am" a few times, this from customers or strangers.   Nothing was said about my apparent femininity by the guy with whom I share the space...and normal conversation didn't require gendered greetings.

It took me by complete surprise when one of the folks from my neighborhood (whom I didn't recognize, but who recognized me) stopped by, introduced himself and invited me to visit their table.  Small world!  At that point I was glad that Mandy wasn't standing there in a pretty dress and makeup...that would have been embarrassing!

As expected, I once again met - and talked with - the trans-woman vendor who first spoke to me in October of 2014 (see my archive post dated Tuesday November 4, 2014 and titled "Part 4...last day and main event!")   We've kept in touch by email and phone, and it was good to see her and her family again - her kids were there as well.   It was nice to be able to catch up on events...even if we had to do it quickly - using time stolen from our selling efforts.

Interestingly, even with reduced attendance, she told me that she had seen (but not talked to) about 3 other folks at the show who could be trans, based on their mannerisms, appearance and actions.   I told her I hadn't noticed any of them yet.   But it was only a few minutes later that a customer was walking the aisles, with a feminine short hairdo, makeup, a masculine build and walk, and a feminine top and jeans with sneakers, but no purse or nail polish.  I spotted her immediately, and then pointed her out to my friend, who agreed - this girl was not one of the 3 she had spotted.   That possible trans shopper didn't stay around too long...   We'll never know if she was, or was not, trans.  But I'll look for her again next year.

We discussed doing dinner Saturday, but unfortunately our schedules didn't mesh to allow that on this trip.  It  would have been fun, but will wait till next year.   And I'll look forward to it!

Back at the hotel, I changed into a skirt and tunic, put on my sweater, and headed for the nearby Red Lobster.  Unfortunately,, two tour buses had come in, and there were folks milling around outside waiting for tables.  I wasn't in the mood to wait, so I drove back to the hotel restaurant for dinner.

But before I left the Red Lobster parking lot, I snapped a picture...see below. 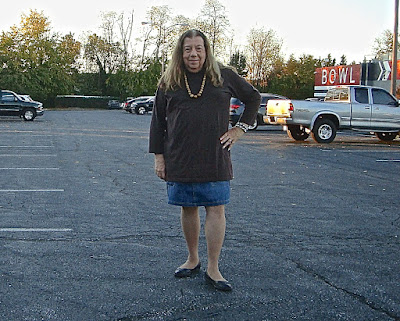 At the hotel, before heading to the dining room I grabbed a couple more pictures - one at the elevator and one in mt room..   Once I had rung for the elevator, two men came around the corner, let me enter the elevator ahead of them, saying "ladies first" and I thanked them. 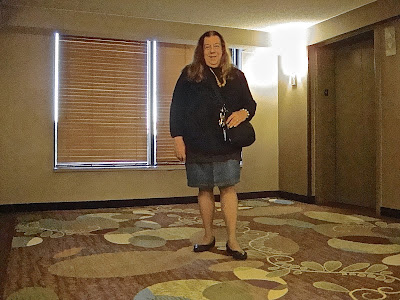 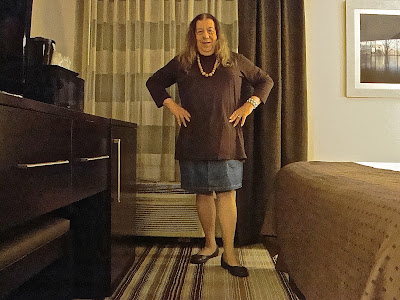 I like the cooler months...clothing helps to disguise some of the less flattering aspects of my physique.  You'll notice that I'm wearing flats instead of my Mary Jane heels...now, that was a "space" issue.  I simply didn't have enough room in the car to bring them!   The car was FULL!   And if I ever can find the perfect dress, that's an item I need to add to my wardrobe.  (Though wearing a dress would certainly limit my ability to "change outfits in the cornfields.")

After dinner, I walked to the elevator, to go back to the room...and who was there waiting, but my friend and her kids (both boys, one over 21, and one under.)  Out of the blue, the older boy invited me to join them at an after-dinner function.  Unfortunately, at that hour, I had to decline...time to finish up some paperwork in the room, and hit the sack, as the third day is an early one, even with the end of Daylight Saving Time.  But I was thoroughly pleased that her sons didn't mind being in the company of an un-transitioned trans woman...but then, I guess I looked fairly passable (there's that word I hate again - let's try "presentable!")   And it's certainly not a topic new to them, so  there's "no issue."

I'd love to talk about things with them.  We'll try for next time...

Mandy
Posted by Mandy Sherman at 5:00 AM