Recently I attended an autumn antique (items, not cars) show/sale, as I have done for several years (though not last year...had to visit the granddaughter right after she was born!)    Prior to leaving, I visited the nail salon for a pedicure, plus a repair on one of my fingernails, which lost some of its gel.  The techs diligently addressed me as "Ma'am" - for which I'm grateful.  I feel very feminine in their shop, and enjoy occasional discussions with the girls...

On the first day, I wore stirrup pants with pantyhose, flats, necklace and a women's turtleneck tunic.  The show is some distance from where I live, requiring a morning on the road before arrival. Those who knew me from previous attendance already were aware of my  birth gender, and didn't seeem to care about my sartorial style.  And concurrently, that afternoon when the show began, vendors noted that attendance got "off on the wrong foot" - translation: it was "way down".  All of us began to be concerned, but the show was for two more full days, so anything could happen.

At the end of the first day, when I checked into my hotel, I was addressed as a woman.  By everyone.  When I entered the hotel with my luggage, the doors were opened and held for me by male guests.  Upon thanking the men, they replied "you're welcome, Ma'am."  The desk clerk (male) unwaveringly used female forms of address (both at check in, and - by a different male clerk - on check-out.)  On my first trip up the elevator, a luggage-less and attractive twentysomething woman entered the elevator first, held the door for me (I was hauling my load of luggage), and we chatted briefly about how tough some of the rolling suitcases can be to control.   Coincidentally, we were destined for the same floor, and her room was next to mine.  She didn't seem the least bit concerned...    "Have a great evening, Ma'am."  "You too, Miss."  Nice.  And I wasn't even wearing a skirt yet!

Mandy dressed and painted her face, then went out to dinner.   She was interpreted as - and addressed as - a woman the entire time.   By staff and customers alike.  "Let the lady by, Jimmy!"  And even though Mandy was alone...she had a good time.  Below are some pix of my outfit.   (Sorry the pix are a bit dark.) 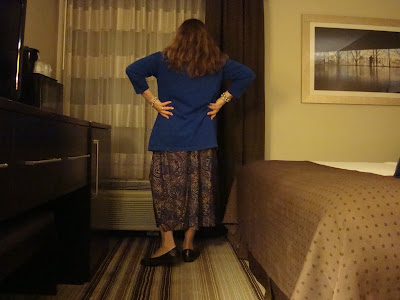 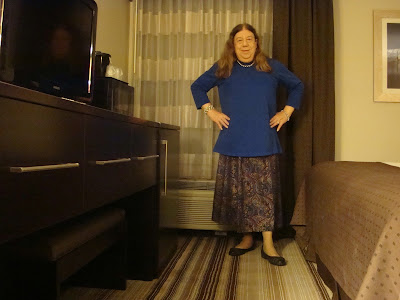 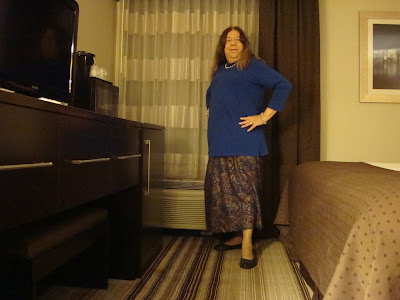 I did not hear the dreaded "S" word at all...and loved it!   After dinner it was time to relax and hit the sack early.  Day Two beckons!

Posted by Mandy Sherman at 3:11 AM