Final day...and attendance picked up considerably.  This certainly helped sales for all the vendors.  I noticed that customers generally avoided using any gender-related form of address when speaking to me.  Only a few used female terms (that was a good thing...particularly with my associate close by, and people from our neighborhood running around at the show.)

But with the increased patronage came a few glances my way.   In particular, two young girls (probably around 7 years old) in tow by their parents at two separate times that afternoon, couldn't get their eyes off me.  I smiled at them as they went by.  If they hadn't been holding their daddy's hand, they would have tripped and hit the deck.  I wonder what questions they had for their parents later?

The one time that day I found myself in need of restroom, a guy (show attendee, I think) was exiting the men's room as I walked in. "Honey, this is the men's room...it's off limits to women.  You use the women's room next door."   I said nothing, and kept walking "in."  Likewise, he kept on walking "out"...and as there was nobody else in the restroom to object, I stayed.  I didn't see him again.  I'm fairly certain that his comment was made with the thought in mind that I (seen by him as female) was walking into the wrong restroom, not as an anti-trans statement.  But we'll never know for sure.

Due to a previously-known significant increase in room rates for Sunday night at the first hotel, that made it necessary for me to change to another hotel for my third night.  Sunday morning I checked out of the first hotel, and after the sale ended, I loaded the car, headed for the new hotel.

Upon arrival, once again I was universally presumed to be female.  Not once did I hear the dreaded "S" word, nor were there any "genderless" greetings.  And at that moment, I wasn't even in a skirt or dress like the following picture - simply stirrup pants, pantyhose and a women's turtleneck tunic, with my purse and necklace.  Of course this girl quickly shaved, applied her lipstick and makeup, and changed into something more feminine...I wasn't about to wear pants to dinner!   In the hotel restaurant, which wasn't busy, there was good service.  The male server, who was attentive to this lady, got a nice tip.

Following are pictures of me as I returned to the room after dinner.  For technical reasons  (namely suitcase room) my wardrobe this trip was limited to two skirt outfits, one jean capri outfit, and one extra pair of stirrup pants).  So with the warm weather, I felt obligated to wear the skirt which kept my legs on display: 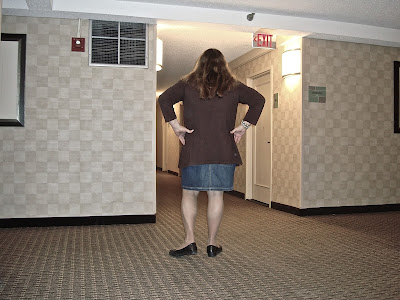 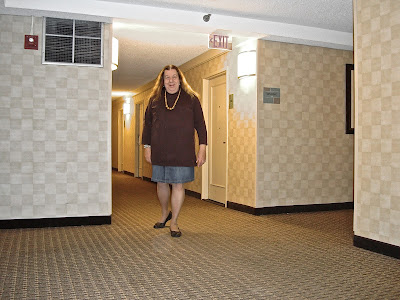 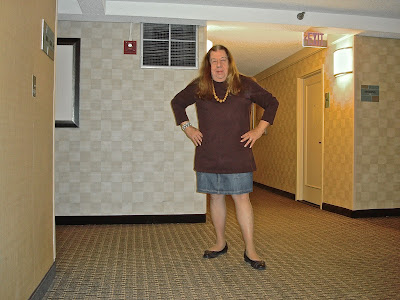 Maybe next year I should wear stirrup pants to the show, but bring my two favorite skirt outfits as  spare clothes.   As long as nothing happens to my pants (like spills or stains) I'd be fine, and it's true that I didn't need to wear my spare stirrups this time.  But I probably won't do it.  If I spilled my lunch on my pants enroute Friday, I'd end up in skirts full time for the rest of the weekend.  While my female side wouldn't mind at all, I'm just not prepared for that quite yet...

But it would be an amazing experience!