What did Della Wear, boys?

Thursday was so perfect weather-wise, that it would have been a shame to "not" hit the road.  There were a couple of errands to run, in addition to visiting my friendly jeweler about the earring repair.  But first, what to wear?  Since part of my trip was to Delaware,  with apologies to Perry Como (the singer of "What did Della Wear, boys?" from the '60's)  I was Della for the day!

One minor pre-departure irritation occurred, however.  Since nobody else was home, I was on duty to deal with an appliance serviceman previously scheduled for today.  Good thing I was in androgynous mode early, as he arrived at about 7:30 - scheduled for 8:30.  His work was completed and he was gone by 8:45, so I was able to move into "Della" mode earlier than I thought initially.

With the temperature forecast to be moderate, I didn't need to wear the tan tiered skirt for comfort.  So, instead I chose the denim skort my seamstress altered for me...her adjustments helped it to fit much better.  And being a skort, it minimizes the chance of lost modesty if I should move or sit "incorrectly."  But what to wear with it?  Well, instead of "she wore a New Jersey" like in the song, I chose my new black blouse, the one which has a bit of a fit problem.  It actually didn't look so bad when paired with my skort.  Thus, until I find a better-fitting blouse, I may just keep it and limit when it gets worn,  to "only with certain outfits."

What girl doesn't wear sandals in the summertime?  Like on all my summertime excursions, probably 80% of us girls were in some style of open summer footwear (many of us sporting pretty pedicures).  Most of the rest were in sneakers.   Only a few girls wore ballerina flats of some sort, and they may have been going to, or coming from, work.  I chose to wear sandals like the other girls, to avoid "standing out in a crowd."   Once again, no need to even bring any closed shoes along.

In regard to my reception at the various stores:  they've seen me before at the jewelry store (which is in a nearby town) and were friendly, but polite enough to "not" use the dreaded "S" word (or Ma'am either.)   I mentioned that they were my mother's earrings, and I wanted to have them repaired so I could start wearing them .  Then I pushed aside my hair for a second to hold one up to my ear, (which already had an earring in place.)  The clerk then took it a step further, reached over the counter, rearranged my hair on that side, removed my existing earring and commented how unusual it is to not have pierced ears, then deftly installed Mom's dangly earring (chandelier style???) on my ear, reaffirming how nice I'll look wearing them.  The other clerk and her customer looked up at me, and both commented to each other some version of "She should enjoy wearing those, they're very pretty! It's wonderful that she honors her mother that way."  Now I just hope the jeweler can do something with them...for under $20, the limit I gave them, because they're just costume jewelry.

At the big box store,  I didn't notice any kids staring at me (and there were plenty of kids), or adults doing double-takes.  Looking at some reflections in glass doors and displays works wonders for seeing "behind my back" responses, and there were none - I was just another woman out doing her shopping.  There was only one real human interaction...at the checkout aisle.  And there, no problems either - just "neither Sir nor Ma'am were used."   That's OK by me...and much preferable to "Sir."   I'd rather that folks instead "choose to not choose" what label fits me.

Then it was a drive around in nearby Dover, DE.  Having only been to the Air Force Base previously, it's interesting to see that there is more to town than that.  And it might be a good destination for sightseeing in the future.

On the way home, I drove past the little (and I DO mean "little") former PRR train station in Sudlersville, MD.  Yes, short freight trains still run through town on occasion (the tracks were very rusty, so not too often)  but the station is now a museum (closed that day), since there are no passenger trains.  At least the station survived and wasn't demolished... 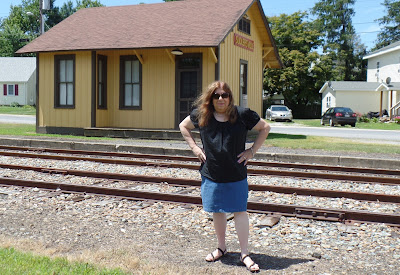 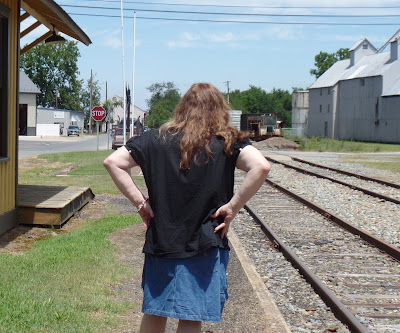 Lastly, I was able to take a "miracle grab shot" out the car window, of a radial-engined biplane being used as a crop duster (similar to the one whose excessive over-spray almost blinded me while driving a couple of years ago.)  But I doubt it was this particular pilot...he or she was being careful, and I didn't even catch so much as a whiff of whatever chemicals that they were spraying. (Of course, whether it's even appropriate to be spraying chemicals into the air in the vicinity of humans is debatable, but I won't go into that discussion here.) 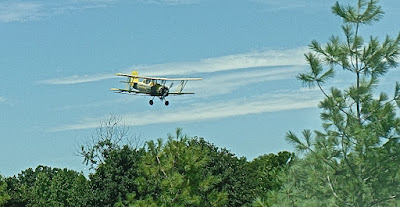 Ending another day's excursion on a positive note: as I left my home-town Post Office after picking up some supplies, (still wearing my skort and blouse) I noticed a woman walking down the street.  And lo and behold, she was wearing the exact same blouse as one of mine...and in my very town, to boot!  Wow...what a small world!

Posted by Mandy Sherman at 1:27 AM