Happy Summer to each of my readers in the northern hemisphere!

When I got home from my "vacation" a while back, there were three blouses and two skirts in my suitcase which had been worn several times, and they needed refreshed.  My wife doesn't know they're mine (instead of my mother's),  and she does the laundry, so I can't very well ask her to wash them.  Nor can I run the washer and dryer myself, without her becoming suspicious.  The local cleaner I used previously quoted me $6 each for women's garments, up from $5 a while back.  Other than suing the cleaner for discrimination (not practical for me at this time - and my wife wouldn't stir that pot herself) or heading to the laundromat to wash them myself (time-consuming), it was a case of "Oh my, what to do?"

My "new" outfit (shown below) isn't really new.  The blouse has been in the bottom of my "sleeveless top" drawer for about three years, seldom worn, but known by my wife.   When new, I put it on for a day out with her.  She rebelled, saying it was too feminine, particularly with shorts or capris and pantyhose, and I had to change to keep the peace.

Since coming home from vacation, I tried it again, this time to counter the very hot weather.  And surprise!  It's no longer a problem to wear out and about, alone or with my wife, even with shorts, pantyhose, flats and my mother's necklace.   Lack of a comment was a major surprise.  Seems that the "envelope" may just have expanded a bit.

I actually have two of these henley sleeveless tops, the one shown and also one in red.  They're super comfortable in hot weather, and have a lovely open neckline, perfect for both getting a better tan and wearing necklaces.

They really seems to help further my feminine image - at least it worked that way, like magic, at Kohl's Friday.  I was in the checkout line with my wife, who was being helped by the clerk.  Another clerk walked up and asked me: "May I help you, Ma'am?" My response:  "No thanks, I'm fine."  So she took the next person in line, just as she should.   But I got absolutely no strange looks (you know, that "a-HA, the light just went on" syndrome) from her...so the outfit must be fine, particularly with the above-the-knee hemline of my shorts. 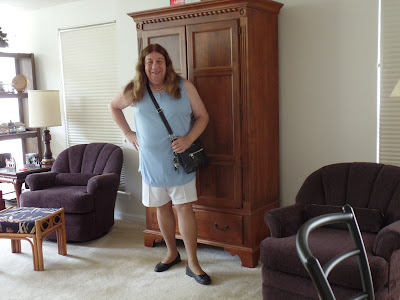 These blouses are going to get a lot more wear this summer than in years past.  Of that you can be sure!

So, the next day I attended a neighborhood event 'solo', wearing the red top with tan shorts, purse, pantyhose and flats, and my name tag with my (now used by females) given name.  People we know addressed me by my first name, thus inadvertently helping to disguise my gender.  One of the female residents (whom I didn't know) asked if I had a small knife in my purse that she could borrow.  Yes, I replied, and lent it to her.  She wanted to open a family heirloom locket.  I unilaterally declined to attempt doing it, for fear I might scratch the finish.  "Oh, that's OK, Ma'am.  I'll have one of the men do it for me."  So she did, and a man opened it for her.  She returned the knife to me, with many thanks...   I guess I've achieved female status with her, and as a result,  have lost a smidgen of that "male privilege" I formerly had...   Maybe so, but it was fun!

Here's another picture from the Avila Adobe in Los Angeles.  While very few passers-by were seen in my photos, everyone was most accommodating, to not "get in the way."  So the place was not  deserted, as you might imagine it was from looking at the pictures. 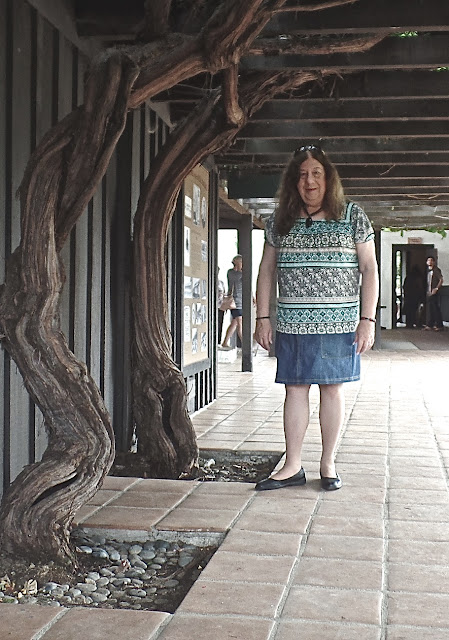 Another excursion-related musing;  following is a view (i.e. framed in the "teardrop" corner dome window) that is only possible to see from a Heritage dome car.   (This one was taken departing Chicago.)  There are no such windows on Superliner "sightseer lounge" cars, and views to the rear of the train (typically through end door coach windows) are often cloudy from accumulated dirt.  (Car washing machines don't clean those!)  So this is a real treat! 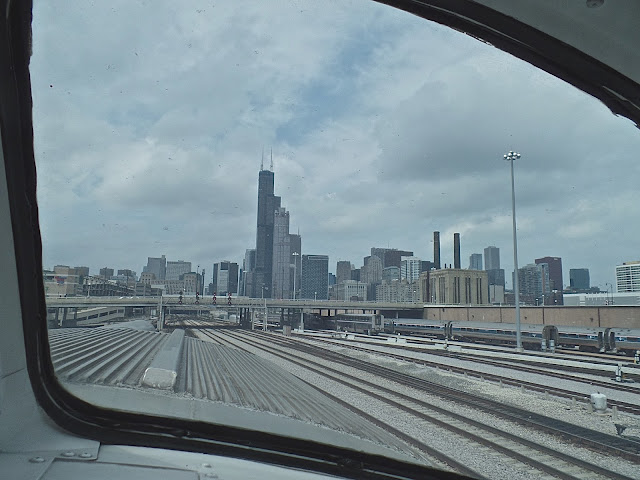 After several days wandering around the house in the pink dress shown in my previous blog "Couldn't believe it,"  my wife apparently decided I shouldn't be wearing it.  and told me to put something else on.  So I did...one of my usual house dresses, resulting in a "that's better" comment.   Not sure why it's better - they're both dresses, and they both cover "that which must be covered."  I'm truly not sure about why the long-delayed reaction.  Since nothing was said about "not wearing it while sunbathing", next time I'll try wearing it again...  It probably will fly.   But no promises...

Moral of that story:  If something seems too good to be true, it probably isn't (true)...

If they are still there next time I go in, I may buy the shoes...they feel more wearable than my regular heels. And if I could be wearing the skirt I want to wear the blouse with, I may even be able to reconsider buying the blouse!