I've been getting post cards from several organizations to which I belong, asking me to call in and confirm my information in their files, prior to printing their periodic book of members, which they then sell to the members.  (Or at least, to SOME of the members - but not me.)  They've done it a couple of times over the past 20 years, too, so it's not the first time.

Yes, before you ask, it's legit...I called the number I have in my file for the organization, just to be sure.  And they ARE preparing to publish such a book at this time.

But today's experience in making one of the calls was rather unique.  The male clerk pulled up my info, and for 3/4 of the call, he addressed me as Ms.  I made no attempt to disguise my voice in the slightest, and from prior posts, you know "it is what it is...male."   Apparently he finally reached the part of the file which shows my gender...and Ms. became Mr.   Amazing how quickly I changed genders!  But it was fun while it lasted...

Earlier this week, it was Senior Day at the pharmacy...and once again, I was using my wife's discount card to make a purchase.  As usually happens, the clerk addressed me by my wife's first name...despite the fact that I was wearing shorts, a tank top, and flats.  No skirt, makeup or jewelry.  Definitely it's becoming a habit for them, one which I enjoy!

On Wednesday was my dentist appointment on the other side of the bay.  It was a solo trip, so after my appointment with the dentist (to which I wore shorts, a tank top, pantyhose, flats and light makeup), I applied lipstick and stopped in to see my old seamstress.  It wasn't just a social visit  to say hi; I had a skort and blouse to be altered.  And her dressing room turned out to be a wonderful spot to change into a skirt - particularly the one I'd like to find a black blouse to wear with.   She was happy to see that I was getting out and about in skirts - "you should do that more often."  I agree with her - and I wish I could!

Afterward, it was off to the thrift shop to see if the black blouse and wedge peep toe pumps were still there.  Unfortunately, it was discount day, and the place had been seriously picked over already.  Both were gone.  And nothing else looked right with the red-and-black skirt seen below.  I guess I wasn't the only girl who liked the blouse and shoes!

Then it was off to the cell phone store I formerly used, when we lived on the other side of the bay.  Enroute to the store, the sky was ominous and leaking a bit.  However within a couple of miles, the rain came in earnest.  Serious rain...like 2" an hour.  Took me about 15 minutes to drive that last mile, and get parked.  Rain let up just a bit, so I ran inside.  A lady waited on me...  She didn't use any gender-specific terms, and I did nothing to alter my voice.  As it was still raining and I didn't want to get soaked, I went ahead with plans to buy a new phone, and have her set it up for me.  Again, nothing was said about my attire - or my gender.  That is, until one of the other clerks said "goodbye, sir" as I left with my purchase.   Darn - their score was perfect up to that point!

For those who wondered...no, it's not a smart phone.  I don't need that technology....and am getting too old for it.  BTW, we have been butt-dialed by our son too many times to count - and have watched him charge his smart phone all night overnight every night, then again mid-day every day - to want to even deal with it.  (They can put a man on the moon, but can't design a battery that lasts longer than half a day.  Go figure.)  A dumb phone - which can generally go a couple weeks on standby between charges - is fine and dandy.  (The specs of the new one say it can last up to 30 days on standby, which if true, is excellent - since I only keep it on for the nursing home to contact me.)

The next day I attended a meeting at the nursing home, about my mother's care.  It was a typical meeting, with one new attendee, a middle-age woman.  I was wearing my shorts, pantyhose, flats and a pink button-down shirt, and was already seated when she entered the room.  As we stood to leave, she came around the corner and said with a big smile "Wow, I see some really nice legs on you - and you're wearing shorts."  I said "yes" with a smile, thanked her, and said "I've been wearing either shorts or capris for a while now. Guess our paths haven't crossed since cold weather left.  (And that's the case.  She's usually barricaded in her office.)

"So you'll be wearing your shorts the rest of the summer?"  "You can look forward to it."   Her reply was "I hope so...you have very pretty legs.  See you later!"  The whole exchange may have been completely inappropriate in a business setting...but I don't really care...I loved the attention!  (And it's only a problem if someone complains.  Neither of us are going to complain! )   Wonder what her comment would be if I show up in a skirt?  I plan to try it one day...just for kicks.

And that gave me an idea - something I haven't done previously:  pictures of my legs in skirts...   Yes, I really should wear them more often! 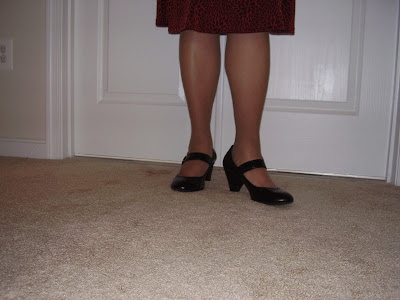 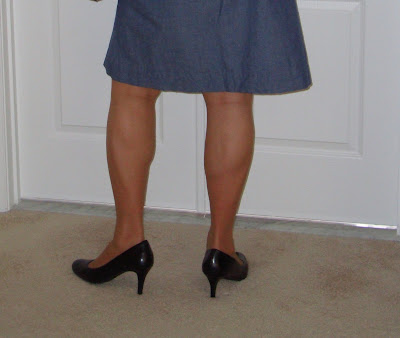 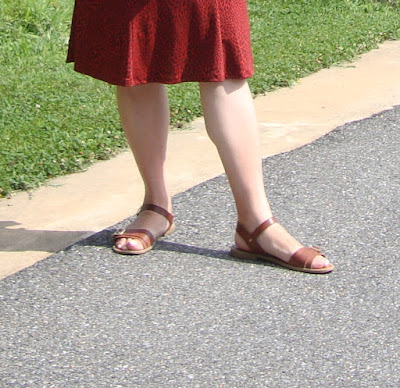 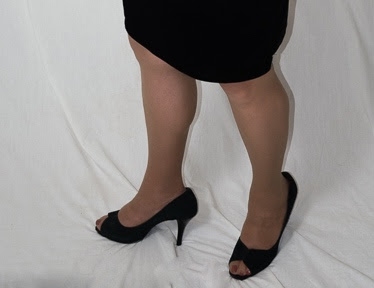 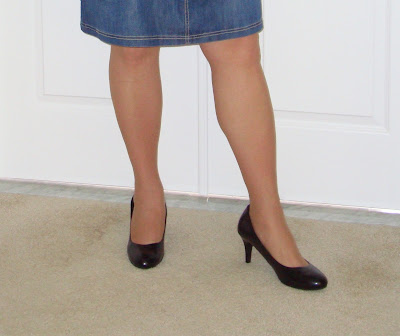 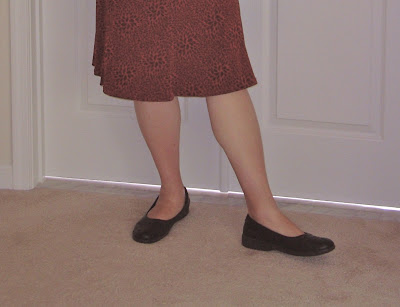 I wouldn't have to "learn to like this look"...I've already passed that point!   And the heels really do enhance my legs' appearance.