Could this highly-customized T-Bucket be my newest car?

Naaahhhh...far too expensive to build or buy, for a car that's not overly practical.   With all the rain we've been having, I'd need to add a sump pump (or put holes in the floorboards) to get the water out!   And rain - or insects - would get into the open carburetors. (For you young'uns, I know your question..."what's a carburetor?"  That big silver thing on top of the engine,  OK?)   Plus, there are no windshield wipers!  Would also be tough to keep any semblance of a hairdo while riding in it and the sun would bleach the color out, letting the gray show.  While this type of car is pretty, it's not a very practical vehicle for my type of driving. 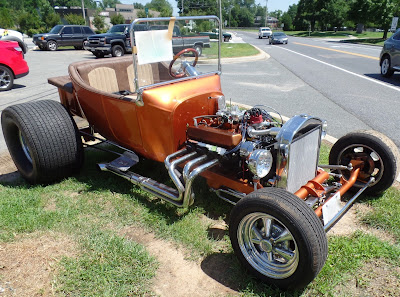 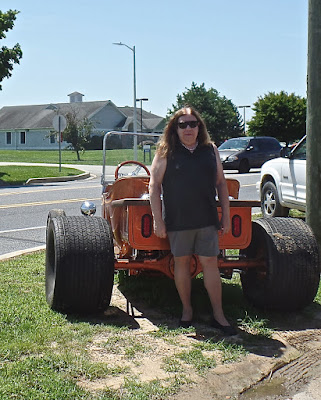 But it sure would attract attention!   From guys and gals alike...and the Boys In Blue!

And then there are these pretty (but violent) thunderstorms - over Baltimore.  I snapped the pictures  the other day, late in the afternoon.  Seen from a distance, they're quite innocent and peaceful-looking.  (It's flat out here on the Delmarva.)  But not if you're out and about in them... 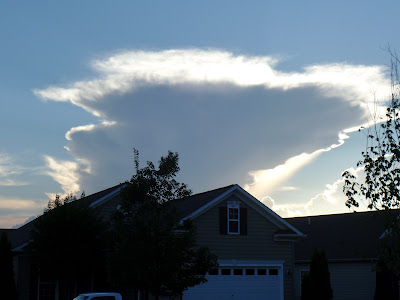 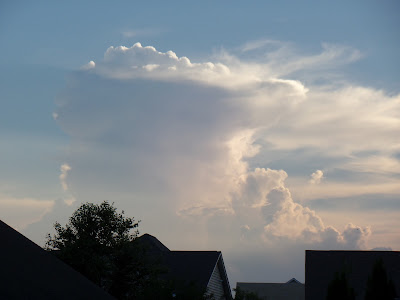 (Especially not if you're driving an open T-Bucket, without windshield wipers!)

My wife was recently called to a family emergency out of town...and this means I have some time to myself.   Just not sure how long, and I have a nice "laundry list" of things to work on.  (And no, laundry isn't one of them.)  But as I drove her into Baltimore, we dropped in at a Big Box store to get me a few supplies for her absence.  And I had to return something before we paid for out new items.

The line at customer service was long, and it was "trainee day."  Plus they had computer issues.  So, during  my 15 minutes of waiting, I was talking with the guy in front of me about the poor service, and the fact that I needed to get "her," pointing to my wife (but not mentioning the term "wife") standing way over there with a few grocery items, waiting impatiently) to the airport.   He said "You probably should have gone to the airport first, Ma'am."  And I couldn't argue with that detail.  "But if all you're doing is returning one item, you can go ahead of me."  I thanked him profusely, and when the time came he motioned me ahead.  Fortunately they were quick with me, and it only delayed him a minute or two.  We paid for our three new items at the check out counter, and were on our way in about 5 minutes.

Did the fact that I was in androgynous mode (with long hair, acrylic pink nails, wearing my red henley, tan shorts, pantyhose, flats and carrying my purse) provide him sufficient clues as to my femininity, or was he just being nice?  I'll never know.  Nor will I know what my wife was thinking, as she watched from 20 feet away, how the man gave me his place in line...she said nothing about it, and it may never be brought up.  She's there now...and by the time she returns, that issue will be ancient history.

Before noon, and within five minutes of getting home, I was wearing a long skirt, sleeveless tee and my mary jane heels.   I'm going to wear this outfit till at least 6PM, as I need lots of practice just being in heels...   I have lots of errands to run on the "other side of the pond" this week, so there may be two trips or more in my future.   (Unfortunately, at least one will be in androgynous mode...)

Today, one of my chores is to do a few of the things my wife's hurried exit prevented her from doing...vacuuming the carpets, dusting the hardwood floors and shelving, and cleaning two big windows along with a couple of shelves in the refrigerator.   These little things are the least I can do for her - she'll be busy at her sister's.  Since I can't cook real meals for her when she gets back, I'll do what I can to make it easier for her later. 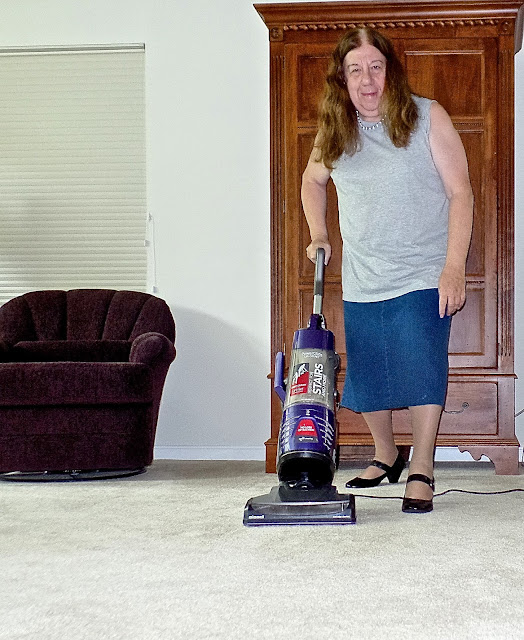 No French maid outfit for this girl!!!   And yes, I kept the heels on till about 6:30.  Though I didn't walk in them continuously, it was great practice.  My legs aren't as sore as I thought they'd be...I'm going to keep wearing them as much as possible while I'm alone, so that probably will come later.