And she got to choose the color...

So there I was, on the way eastbound across the bridge in my skirt, blouse and heels, and I looked at my nails as I drove.  They weren't really that bad...it had been a little over 2 weeks since my last appointment.  But with my wife attending to her sister in another state, here was a chance to wear nail polish for a while.   So I changed course and headed in that direction, and called to make sure she could do them.  She said she was busy, but "come on out."  I told her that if I do, I'll be in a skirt and heels.  Her answer:  "Why not?  Just be yourself..."

When I arrived and sat down to wait, my tech's husband was there.  Seeing him is not an everyday thing by any means...maybe twice or three times a year...he does nails at peak times. (Translation: not often when I'm there.) And it was very busy that day.  He knows my voice, has known me as a guy for about 5 years...and always greets me as "Sir."  But we've never met when I was fully dressed.  My take on it was that he didn't "look up (to see how I was dressed) before he leaped." And my voice isn't particularly feminine.  It was obvious that his head didn't move upward.

It was better to not try to debate the issue in public, with so many customers present.  At this point, he gets the benefit of the doubt - I'll believe it was not intended as derogatory.  In any event, a "gender-related discussion" in public would most likely never win any points in a conservative small town, despite recent positive vibes from Caitlyn Jenner's transition.   And, when he was done with the customer he was working on, he simply left (as usual.)

The next time I'm there when it's quiet (there ARE a few days like that), or at least when not within earshot of another customer, I'll ask my tech to request that he use my first name (which is female) and simply omit the "anything else like Sir"  Then if it continues to happen when I'm dressed, I'll know that he falls into the category of "more than a little bit prejudiced." At least he doesn't do my nails.  And, I also know to avoid showing up at 3 PM, when they tend to be very busy...it's extremely rare to see him first thing in the morning!

Soon my tech motioned me to her table, and we discussed what she was going to do.  Since I wanted to wear (and she has wanted for some time to give me) real nail color, she'll said she'll pick out something seasonal and appropriate.  The fill took a while, and afterward she brought out a couple of really pretty gels "which are popular with the girls right now.  Wearing gel will give you a much better, longer lasting finish."  "I hope you can use regular polish, since I may not have time to come in to have it removed."  She walked back to the polishes, and and when she returned, she smiled.  In her hand were a bottle of metallic silver, and also pinkish-purple with very fine sparkles in it.  She applied a coat of the silver, then two coats of the pinky-purple, and a top coat, drying each coat under the blue light after she applied them. "You have very pretty nails, and you'll truly enjoy showing the girls your long-wearing color."  At this point I have no idea how long I'll be wearing it, or how hard the polish will be to remove.  So, I'd better begin to take it off a day early.   That'll leave me time to get back to the salon to have it removed, if necessary.

When I asked her why she chose that particular combination of colors, she said that "It sparkles a little, it's popular, and pretty.  And it's almost the same color as you're wearing on your toes...I like to see girls with matching digits." 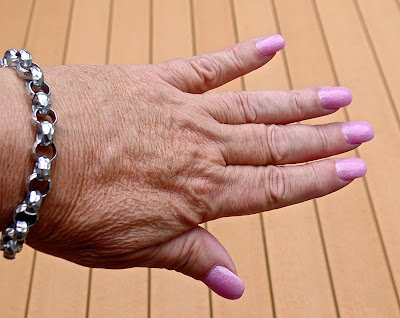 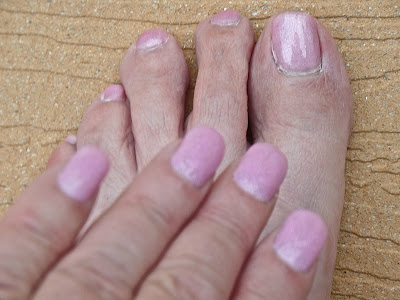 And she's right...the colors are quite similar, though from different bottles.  My pedicure was done almost 3 weeks ago, not recently. So it is showing some wear!

There haven't been many occasions to show my nails off, but I like them so much that when the occasion arises, I certainly will.  I'm just very curious as to whether I'll be able to remove the color at home.