At the hobby shop...

Hope you all had a good New Year Celebration!

In case I didn't mention it earlier, one of my hobbies is model trains...

Unfortunately, my layout is not as detailed and easily watched as those of some of the other girls here.  Nor is it in HO scale...   It's O scale, digital remote control, and it's on a platform suspended 16" from the ceiling.  Thus it doesn't need to be super detailed, as up-close observation requires a ladder.  However, you can see the the train running from most seats in the living room.

Views from a ladder are below... 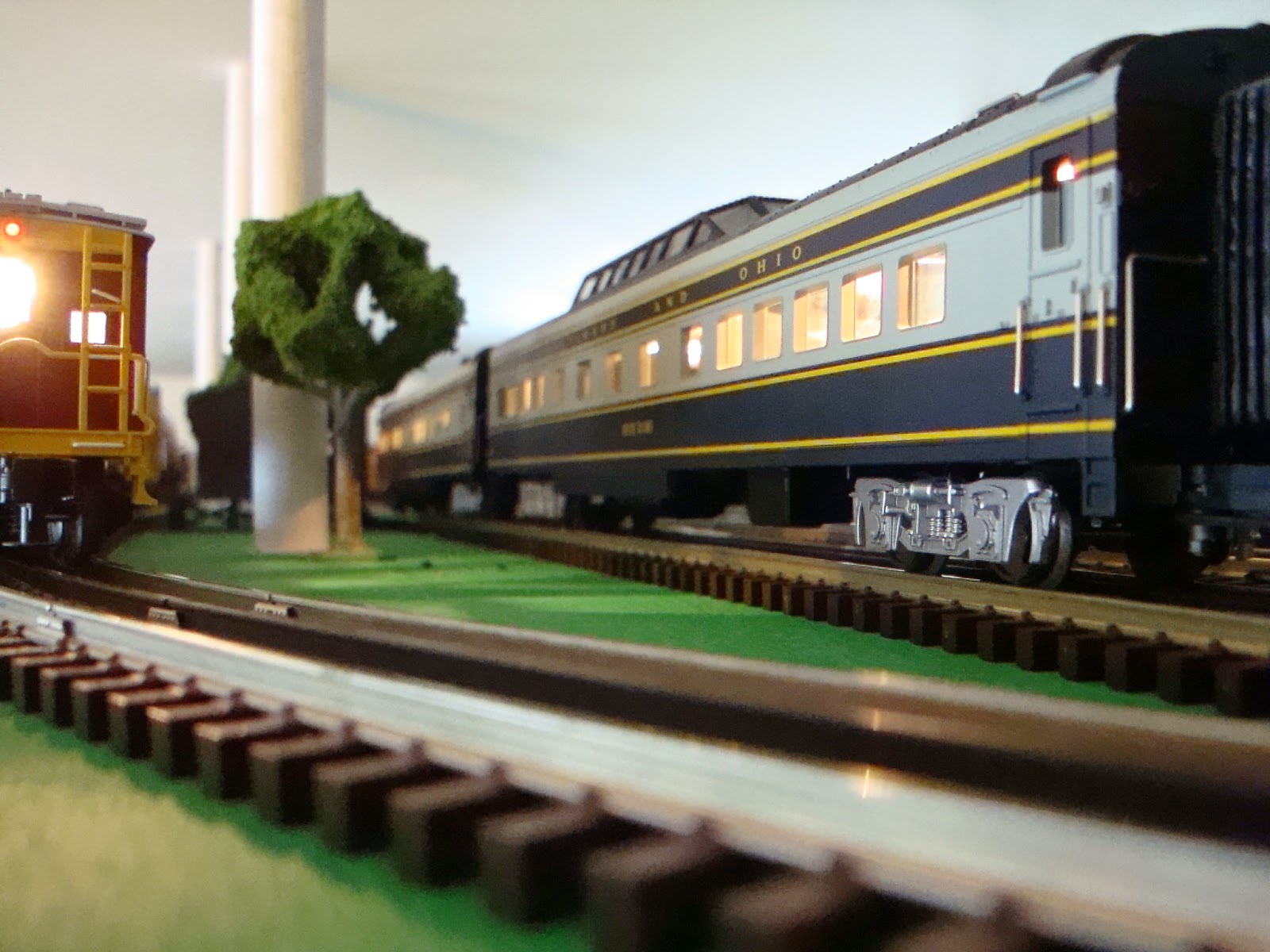 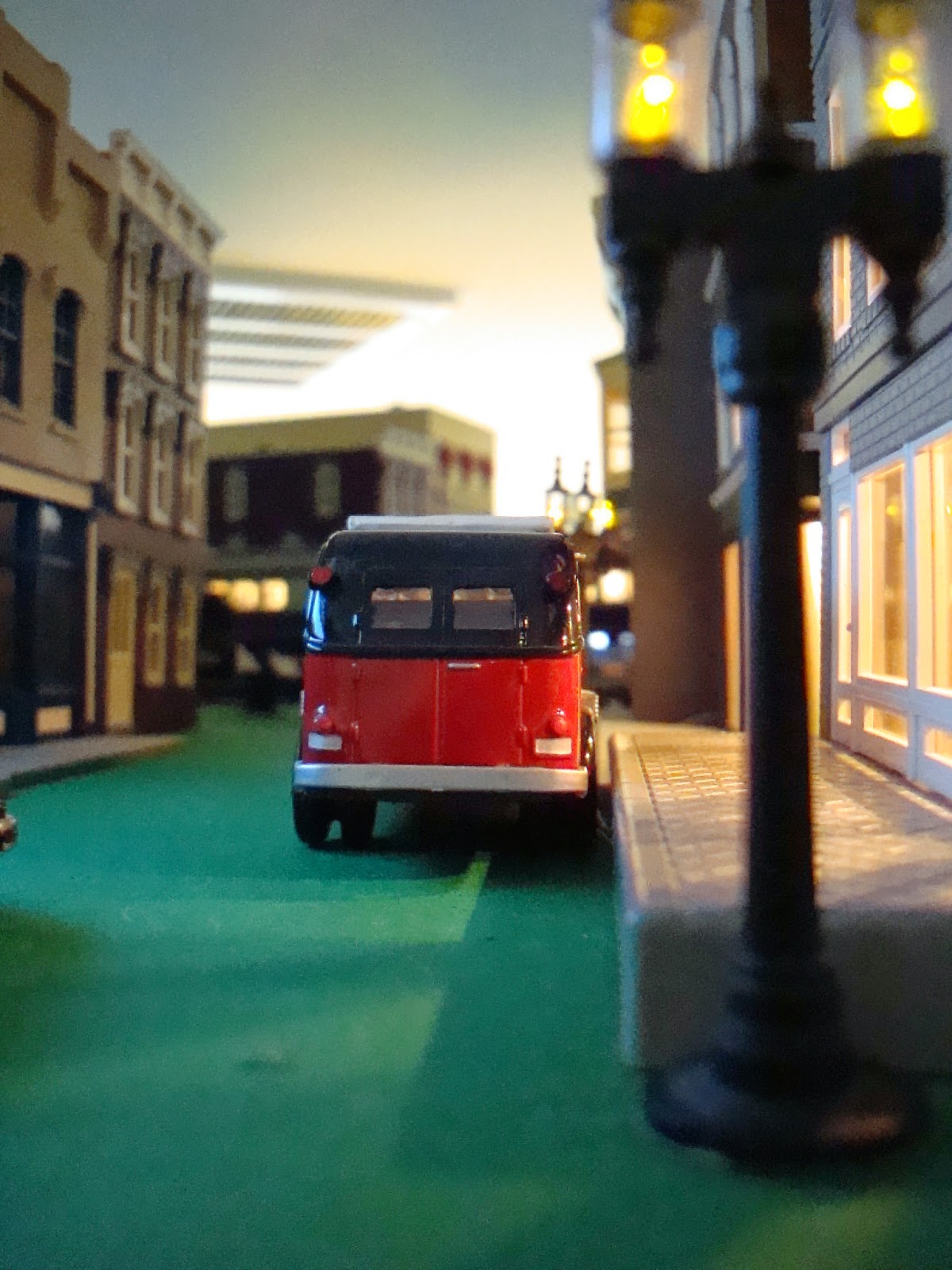 That presumes it's operating.  Which it's not.

Over the phone, the manufacturer's customer service rep gave me some tasks to accomplish, none of which helped the issue.  So, my wife and I took the smaller engine, a road-switcher,  to a repair shop to have it looked over...   The staff and customers there interpreted me as female.  (An old-fashioned hobby shop seems to be a bastion of testosterone-producers - even more so than an auto repair shop.)   Men - middle-age and older - went out of their way to hold the door for both of us, said "good morning, ladies" and used only the proper female forms of address.  It was fun...and we both were surprised at the general male lack of observation skills, as I wasn't looking any more - or less - feminine than usual that day.

When my switch engine was ready for pick up , I went in alone, carrying a huge box containing my other diesel locomotive - an A-B-A streamlined E-6 locomotive set.  Very safely packed for transport, but bulky.  Once again, men bent over backwards to hold the door, used the proper female forms of address, and moved me to the head of the line, even though I declined.

This turned out to be a bit problematic later...

Those of us standing in line had to wait for someone to serve us, and in addition to dropping off the loco, I had to pick up the finished one.  But as it turned out, who was there, talking to each of the customers?  That's right, none other than the technician, who had called me!  At last he was finished with the customer ahead of me, whom he'd been talking to since my arrival...   And though we had talked on the phone the night before, my voice apparently didn't sound familiar, as he started "I was talking to your husband last night...."

Hmmm.  In astronaut-speak: "Houston, we have a problem."  I didn't really think it wise to "out myself" right then and there, and say "I AM the husband."  It might just tick off the nice folks in line, who had insisted I go first, and refused to take no for an answer when I tried to defer.   So I laughed and said  "Oh, you actually talked to me last night - I know about the problems."   That eliminated having to specify whether I was the husband or the wife.  And it worked fine...I only heard "your husband" once after that.

However, when I got the switcher home, it still wasn't running.

So I called my friend the tech back, and discussed it with him...not actually saying whether I was the husband - or the wife.  Didn't need to.  But it turns out that the train problem is almost certainly not the engine(s).  Because the switcher doesn't run after being tuned up and tested, the problem must be in the digital system which tells the engine what to do.   He will check out  my 3-unit locomotive and make sure it runs right, but I'll need to take in the digital control box for repair.  If he can't make it work, it will need to go to the manufacturer for repairs, normally a 4-month lead time.

So I played around with the lame digital control system after the call, pressing buttons as per the instructions I found on line, and the switch engine abruptly started to run - fitfully, with no horn, bell or other features, but at least it proved the engine works fine.  That seems to have narrowed the scope of the problem down to the digital control unit.

This is an ongoing saga, with more to come....the streamlined diesel should be done some time next week.  Stay tuned.