Our son, who lives in the Mid-west, spent Christmas week with us. We had a great time, and a very good holiday with him.  The weather was perfect, and there were no travel problems.

One day after Christmas, we were preparing to go out and about, and my wife decided that since I was carrying my new purse, she wouldn't need to take hers along.  She gave me her driver's license and house key to carry for her.  "That way you get to deal with everything today."   Later, I heard a couple of comments about how nice it was to not have to worry about her purse.   Will it happen again?  Time will tell.

The three of us took a long drive to Hoopers Island, in reality a three-island chain (two of which are reachable by auto - the bridge to the third washed out in the 1930's and it is uninhabited), situated between the Honga River and the Chesapeake Bay, in Dorchester County, MD.  Dating back to the mid-seventeenth century, Henry Hooper found it a good place for a tobacco plantation.

The islands lose about 24 acres of land a year to erosion and rising water levels.  And over the years, the focus has changed from agriculture to the fishing industry.  That was fine, and provided a good living for the hardy residents, until the latter half of the 20th century, when pollution as well as rising water levels caused a decline in productivity.

The islands are still very much nautical -  boats and 4WD vehicles are everywhere.  Marshes, reeds and standing water are in almost every low-lying spot, and there are a number of abandoned buildings, probably due to lack of jobs and/or money.   The residents seem very friendly - everyone waves at you, whether they know you or not.  Traffic (the bane of my existence) was nil, a wonderful treat on a busy after-Christmas shopping day.  (Of course, there aren't a lot of commercial establishments out there...)

Below are a few pictures... 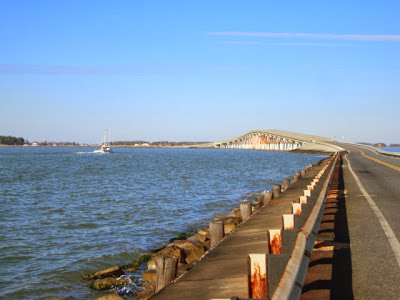 The causeway to Hooper's Island 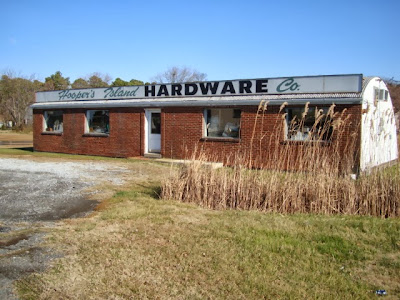 The local hardware store...certainly not a lot of business to be had...

We had just been seated for lunch at the restaurant en route home, when an elderly man and his daughter came in and were ushered to the next booth.  As he approached, he could plainly see our son from the back (with his long hair tied in a ponytail), as well as both my wife and long-nailed-and-long-haired androgynous me, from the front.  After greeting the three of us "Merry Christmas ladies" he asked us if we had a good Holiday.  Fortunately, my wife spoke for all of us, responded that we had, and wished him a Happy New Year as he sat down.  Very friendly sort...and nary a comment from either of my dining companions, who had much more important things to talk about.  Waitstaff simply omitted any gender-identifying terms...oh, well!  At least I didn't get that un-wanted "Sir-prise."

After arriving home, our son pulled out his box containing the board game Settlers of Catan, which he and his girlfriend have been playing a lot. We'd never heard of it, but he helped us learn the rules, and yours truly ended up being the winner for the day.  It was fun!  Wonder if this is one of the games played at "Games Nights" some of the girls on here attend?

And Saturday, after our son had headed home, I went to the nail salon for my shellac pedicure.  Women were everywhere - all 4 pedi chairs were full - three of us women, and one little girl getting her kiddie pedicure (she was SO excited to be just like the big girls!)  The techs took care of us all, with no problems.  It was wonderful to be accepted - even the little girl was fine with my being there...no stares or anything inappropriate.  She was perfectly behaved.  (Maybe she "miss-identified" me?)  And I enjoyed being included in the discussion about Nantucket as a wonderful vacation spot. (Now I want to visit there someday.)

When I asked the lady two chairs down from me (mother of the little girl) why she had chosen 5 bottles of different red nail polishes, she explained that she wanted the tech to paint one nail on one hand with each color before she made her final decision. But subsequently her plan collapsed, when her little girl told her which color would be best. The lady simply told the tech to just go ahead and follow her daughter's advice.

The newest tech (working at the adjacent chair) looked really cute wearing her knee-length dress in a dark floral pattern, over black tights (unusual attire, in that pants are their usual uniform.)  It was a delightful little outfit, something I'd certainly wear if I owned it...   But it's tough for techs doing a pedicure to remain perfectly modest all the time while wearing a dress or skirt - at least occasionally it's more comfortable to sit with their legs apart. I'd made no effort to hide my plainly-visible french acrylic nails.  Obviously, she didn't consider me (sitting in the adjacent chair) to be "mixed company."  Why would she?  Guys don't have long hair and long french acrylic fingernails!  Women are all too familiar with the many benefits (and yes, even a couple of hazards) from wearing dresses.  And, anyhow, guys certainly wouldn't be getting their toe nails "prettied up."

I respectfully didn't look at her during my pedicure, only up at the telly on the wall...  When it was time to get up from my chair, there was no way to avoid looking down - I had to lower my pant legs and get my silver-nailed feet into the stirrups, then slip into my flats.  She obviously felt no need to close her legs, as her tights helped protect her modesty.  She continued working on her client, only looking up at me to smile and wish me a  "Happy New Year, Ma'am" as I left.   And yes, I love being "a member of their team!"

Note to self...in cold and windy weather, wear my tights (black, or maybe tan, depending on the outfit) under my skirts and it will help - particularly in a "Marilyn Monroe" moment!

Ladies, it's been a fun week.