Some fun around town...

I was leaving the nursing home where Mom stays, and a car pulled up on the driveway next to me.  I didn't pay any attention to it, but as I continued to walk toward my car, I heard "Ma'am?  Excuse me, Ma'am?"  So I looked around and the elderly male driver had lowered his passenger window to talk to me.  (Good thing I answer to male OR female forms of address.)   He had several questions about where he should park, since he had handicap plates and there are two entry doors.  I helped orient him, and he ended with "Thank you Ma'am."

Those occurrences are always so pleasant!

My next stop was at a liquor store, where I was in search of a particular adult beverage to give as a wedding anniversary gift.  To the male clerks, I was female, the entire visit.  Unfortunately, they weren't able to help.  Guess I'll have to stop at a bigger store across the bay bridge...

Since the weather was spectacular, and I was in the mood for a picture while wearing my new heels, on the way home I made a detour and visited the re-purposed former PRR train depot in Easton.  I walked on the rail trail for a bit, then got out the camera. 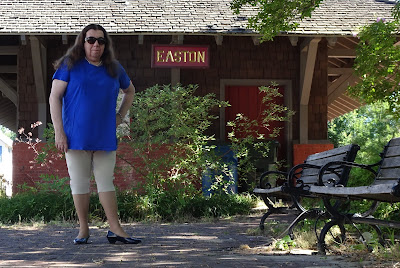 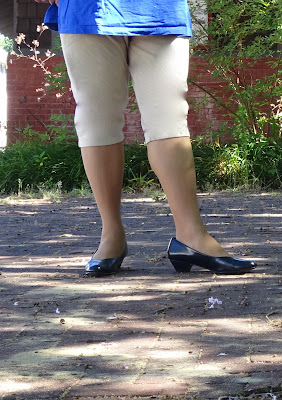 My new shoes are a bit snug, but I think they'll loosen up over time...so they're a keeper.  And not hard to walk in with the low heel.  Because the heel is not pointy (stilletto), they're very stable.  Less chance of tripping or twisting an ankle. That's a big plus!  They didn't cost a fortune, but I hope they work over the long run.  There's nothing I'd like better than to be able to wear heels while dressed, no matter what the outfit!

Mandy
Posted by Mandy Sherman at 1:21 AM