We had a wonderful time on our recent adventure.  That goes without saying.  But I noticed three issues, which stand out.

One, there were a number of occasions where I heard the dreaded S-word.  That was expected, of course.   There was very little femininity in my appearance, due to the circumstance of this trip.  You can see that in the picture below.   No makeup, no jewelry - just purse, long hair, acrylic nails, women's tunics or polo tops, women's shorts and sunglasses.   Given the conservative nature of the state, that may have been a good thing.  (However, we all know from Kim's blog that she has no problems with traveling "pretty" from a nearby town.) 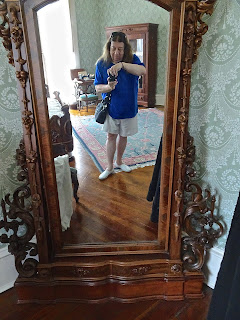 Two, the issue of the previously-mentioned panhandler(s).  What made me stand out against a backdrop of genetic women?  Doubtful I look as feminine as they do, since quite a few were in skirts.  So why did the panhandler use feminine forms of address for me, while "ignoring" my wife?  (Not that she wanted their attention, but...)

And lastly, I've noted a significant shift in my wife's summer attire since the weather began to warm up: from shorts to skorts.  She looked (looks) very nice...no doubt about that.  It's just the current fashion, right?  Or is it?  Hmmm.

I have a couple of solo trips on the drawing board.  One short, and not so feminine.  One long, and fully femme.   Hopefully they will come together, and I'll have more interesting things to write about!   Stay tuned.