One day while we were walking around and exploring San Antonio, we came to the San Fernando Cathedral.   The original church was built in the mid-1700’s, and it was enlarged to its present size in 1868, making it one of the oldest cathedrals still serving in the USA.  It played a part in the war with Mexico, and today has a casket with the alleged remains of Col. Travis, James Bowie and Davy Crockett, all of whom perished in the Alamo siege. 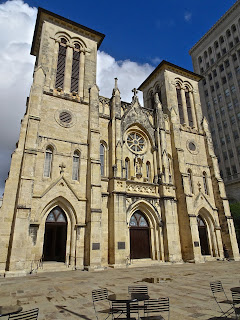 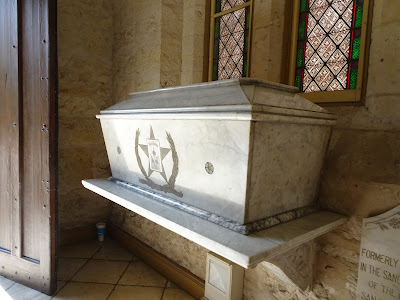 Once we had our rental car, it was off to visit the San Antonio Missions National Historic Park, just south of San Antonio.  Our rental car shortened the time frame for our visit to the group of missions,  but without it, we could have walked the several miles from town on a branch of the riverwalk.

That first one (Mission San Jose) was in the best condition, with a gorgeous chapel and beautiful mission grounds. 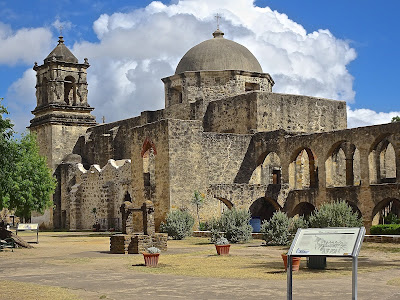 The others we visited (San Juan and Espada) were well kept, but some of the buildings were stone foundations and/or walls, not structures.   At least the sites are stabilized for future viewing.  Well worth the visit! 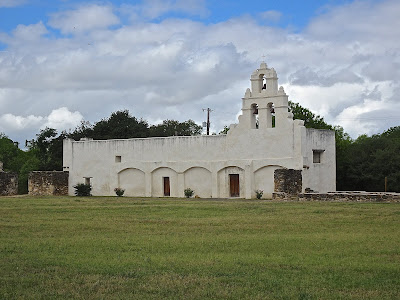 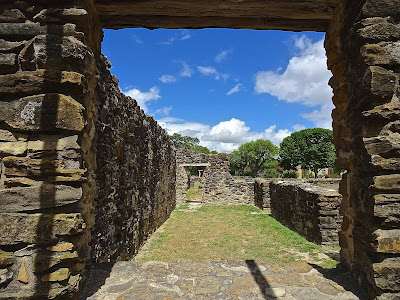 And on our way back to the hotel, we stopped by the irrigation aqueduct and dam, built to bring water to the crops at Mission Espada.  And with some repairs in 1895 and the mid 1900's they still remain watertight today!  Quite an engineering feat for something designed and built between 1740 and 1745. 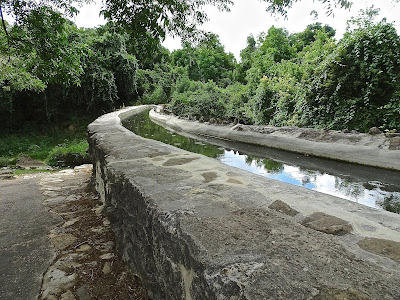 On the last day of our San Antonio visit,  I wore one of my few men’s generic polo shirts (buttons on the "men's side" and a railroad logo on the chest) with my women's white shorts and Keds women's sneakers.  Again, no jewelry at all.  No makeup.  Just long hair, purse and nails.  IMHO, not blatantly feminine.

Panhandlers were out and about en masse.  My wife tended to "not" be hit on by these panhandlers.  But I was - several times - “Ma’am can you spare a dollar?”  While she was with me.  I thought to myself: "that's not very tactful, guys...cut it out!"  And I certainly didn't donate.

My wife picked up on this issue, but said nothing until I mentioned that I had noticed being “hit on” fairly often.    She commented that she doesn’t like that, or my being seen as a woman when we’re out together, but that it happens a lot, and she tolerates it.    And with that said, she promptly changed the subject.

Being away from home, I didn’t pursue further conversation about that topic.  With only “what everyone seems to consider feminine” outfits in my suitcase, and away on a trip, spousal issues could be more than awkward.   But I think I understand how my getting attention as a woman, when she is “ignored,” could be somewhat frustrating.   We’ll have to see where this goes, over time…but I won't push my luck with full dressing in the near future.

As for the panhandlers themselves: What ever happened to “Can you spare a dime, Ma'am”?  Guess either inflation has set in… or else oil bucks from high oil prices are rolling free on the streets in San Antonio!

Mandy
Posted by Mandy Sherman at 2:47 AM