Time was growing short for sightseeing, so we returned to our hotel.   Yes, once again the balcony was wonderful for relaxing…

At dinner time, it was back to the riverwalk to find our meal, and on the way, we noticed a statue of San Antonio’s namesake:  San Antonio.  Interesting.  Didn’t ever think about the origin of its name. 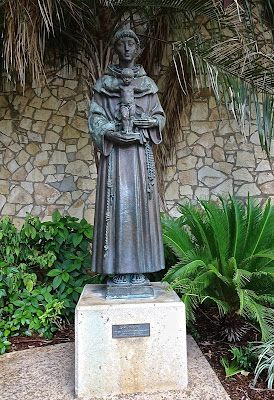 All too soon it was time for this excursion to end.   Our departure was from the same station at which we arrived – the old Sunset Station.  It consists of several buildings and is an event center as well as train station, thus the gates to the event center part of the station were locked.

Unfortunately it was well before dawn, thus this is the best picture I could get: 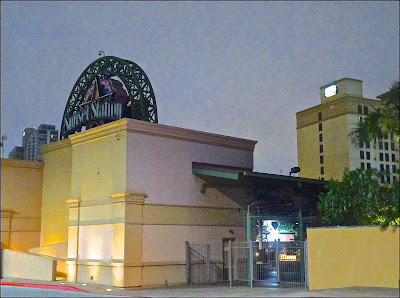 On the way through Dallas, we passed by Dealey Plaza, where Kennedy was assassinated back in 1963.  And I took a quick picture of the building from which those fatal shots were fired: 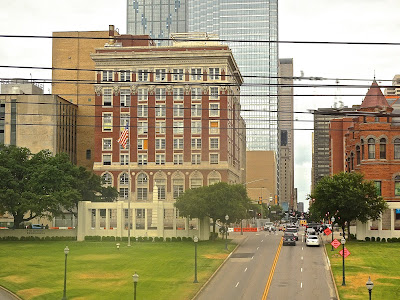 Trains all ran late enough that by the time we got to Washington DC, we had missed our connection for Baltimore.  But Amtrak put us on another train, departing only a half hour after the one we missed.  Even though we were inconvenienced, that was quick service!

It was a wonderful trip, and we both enjoyed our visit to Texas.  Will another excursion like this be in the cards any time soon?  We don’t know.  But I do know that I will once again be out on the rails - hopefully sooner rather than later.

And I’ll be writing more entries for this blog when I do.

Mandy
Posted by Mandy Sherman at 1:19 AM