It was a very good experience...

In general, on this joint excursion (for a wedding in the mountains of New Hampshire), there were mostly no references to gender in addressing me.  Of course as always, I noted some exceptions to that rule!

Enroute:  Days 1 & 2.    I was dressed in capris, top and flats, and went inside at a PA rest stop, to use the men’s room  (there was no “family room.”)  The female attendant stopped me, pointed out the the men’s room sign by my shoulder, and said "use the women’s room over there."

In my male voice, I told her that the men’s room was appropriate, and she appeared to be shocked.  That made my day, week and month.   Even better was the look on two womens' faces as I came out of the men’s room and they started to go in – until they read the sign.  I guess I must have been “passing” a bit better than I thought.  No makeup, either...

Traveling in Vermont, on US 5 in Bellows Falls, I was “Ma’am” at a restaurant.   There was an information booth in town, and when I got there (after taking pictures around the Amtrak and Green Mountain railroad stations), my wife was already talking with the lady attendant.  I heard “my husband” mentioned as I browsed.  So, I didn’t do any talking, and when we left, the clerk said " thanks for stopping by, ladies.”

During our walk around town after lunch, we came across this cute old diner.  Wish we had noticed it earlier.   Would have been fun to try it for lunch, instead of the restaurant we visited. 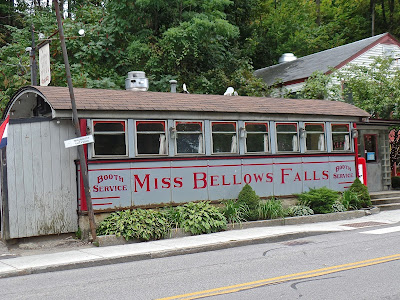 We stopped at the Vermont Country Store, just outside of Bellows Falls. In case you're not familiar with them, look them up on the web.  Fascinating place to visit - if you need it, they probably have it.

In White River Junction, a bit further up Route 5, I noticed a pair of abandoned phone booths…see below.  Don’t you wonder how many teens are oblivious to their former place in "everyday life?"   Need to call home?  Find a pay phone...there's one on every corner.  Car acting up?  Look for a place with a pay phone. 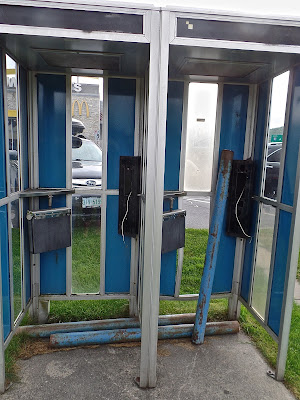 By dinnertime that night, at the wedding venue, we had checked into our lodging of choice, and I had changed into the best casual male I could muster (women’s slacks and a turtleneck) for the rehearsal dinner, with my hair pulled up and pinned into a pony tail.  (My wife wants it that way, and I'm agreeable...as long as it's only for weddings and funerals.  In return, she seems to pretty much overlook my femininity the rest of the time.)

The bride and groom knew me as male, as did several others, so there were no issues.  However, it was a good thing I was wearing my pair of women’s dressy work boots with my outfit…and not my dressy black flats.  The bride’s mother was wearing a pair of Clarks flats, exactly like mine…including the same color!  Given the bunch of 30-something women there, it surely would have been noticed.   (Apparently we both have the same taste in shoes…I would have loved to have been wearing her heels that she wore to the wedding the following day.  About 4” high.  Peep toe.  Nice.  Even though she had trouble walking in them.   I would have, too!)

Throughout the evening, I kept hearing girls talking about “Miss (insert my male name – which is now used by females).  Come to find out one of the bride’s best friends is a female by that name.   She’s very attractive, just like the bride!  If I had instinctively responded, it would have not been particularly good, especially since I was presenting as male!

Day 3: the wedding itself.   Other than hearing my name (when people were actually calling to the bride’s best friend), I was not mistaken for female - my hair was pulled into a ponytail/pinned up, and I was wearing my “Weddings and Funerals Only” men’s suit.  It must have made my wife happy that she heard “Sir” being appropriately used a number of times that day.

Days 4 and 5:  Enroute home.  There were no notable issues, even though once again I was back in feminine clothes.    And in Port Jervis, NY we managed to find the former Erie RR turntable and storage siding (with turntable and visible footers for the roundhouse walls) for the defunct short line New York and Greenwood Lake passenger train and engines.  It was behind a pharmacy and next to a substantially-abandoned strip mall.   Not the best of neighborhoods, to say the least, but we survived! 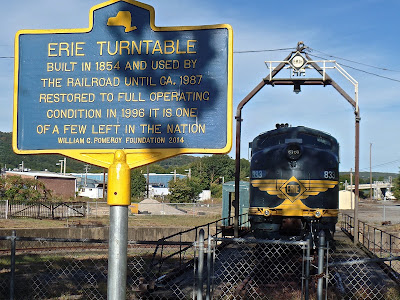 And I even managed to get some pictures...above and below: 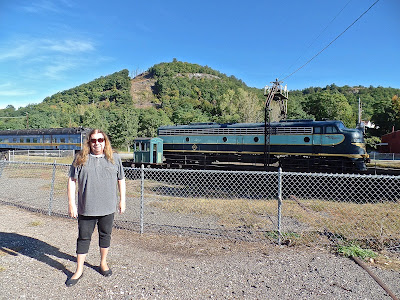 Response to my androgynous style of  dressing was much better than I figured it would be.  Let’s hope that trend continues.

Mandy
Posted by Mandy Sherman at 4:50 AM