I had to take my wife to a couple of appointments the day before we left for a visit to the kids’ place down south.

After I delivered my wife to the dentist’s office, I set off for the cell phone store for answers to some questions about upgrading to a newer phone.  There, the only clerk was busy selling an expensive i-phone, so I waited for about 20 minutes after having been told by the clerk “stand by for a few minutes, Ma’am – I’ll be with you shortly.”   Twenty minutes later, they were still at it, so I said “I’ll be back later, Miss.”   “No problem Ma’am.  Thanks for understanding.”

So it was back to the dentist to wait for my wife.  When I entered the waiting room (in black capris, a red tee-blouse with necklace, and black flats) while she had her appointment, a woman walked in and sat down.   Instead of sitting there and staring at me, she chose a much friendlier approach to figuring out the enigma - start a discussion about the weather.  I had my laptop with me, and used it to check the forecast as we chatted (I don’t use a smart phone.)

Naturally, this developed into a wonderful back-and-forth about places we’ve lived and the weather there.  Then a man walked in (her husband, it turned out) after parking their car.  On his way over to sit down next to her, he smiled at me and said “A-ha, a working woman with a laptop.  Where do you work, Ma’am?”   When I told him I’d retired…he said he spent 26 years in the Navy, and was also retired.

He touched on the subject of politics just enough to imply that despite being a retired military man, he could not support “the orange one.”  We agreed that candidate probably would not be a good choice for anyone – except perhaps the "top 1 percent of the top 1 percent."  And we agreed that this is the first election we can recall, where Americans won't be voting for the best candidate...instead they'll vote "for" the one they "dislike the least."  At that point the topic evaporated, and other topics were discussed.

As more folks came in, they simply picked up a magazine and started to read.    It was a real pleasure to not end up playing "Peek-a-Boo, I See You" with  folks in the waiting room...whether they're wearing sunglasses or not!

I heard my wife come out of the office and make her next appointment at the front desk (around the corner, out of direct sight), and the clerk asked if she wanted to check with her husband since he had his computer.  (In other words, she knew precisely who I was – and thus my gender.)  My wife said no, and she actually guessed right about a good date for her next appointment.  The folks I was talking with didn’t seem to relate the medical assistant's "husband" comment, and when I got up to leave, they said, “so long, Ma’am.”

The experience "made my day"…that's the way things should always be.

Preparations for our visit to the kids’ place was fun…and on the appointed day, we left the house with me dressed androgynously, in capris and a blouse, with flats.

Enroute, at a couple of rest stops enroute I got the usual “looks” at the men's restroom, but no real issues.   And at our lunch break, the clerk did not use gender specific pronouns.   Other than that, the trip was quite uneventful…giving us time to stop in Marion, VA – home to the Hungry Mother State Park, a visit to which I described in a recent post.

Here we found the Lincoln Theatre, a restored early 20th century vaudeville venue, beautifully restored after a number of years in disrepair.  The door was unlocked, so we walked in and were only able to get a short, unofficial tour, as there was a planning session in progress on stage - full tours were out of the question. 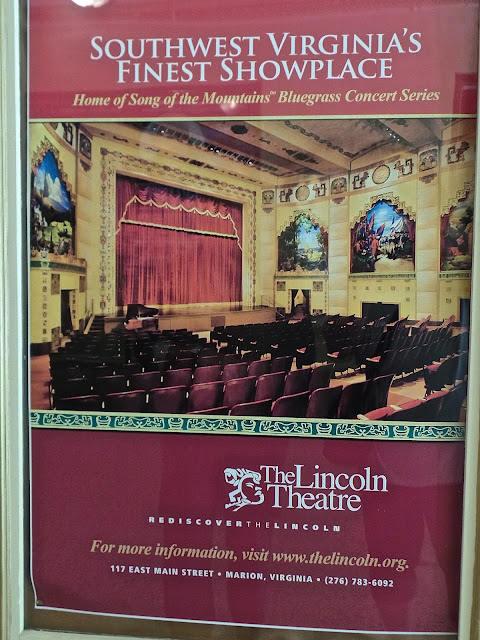 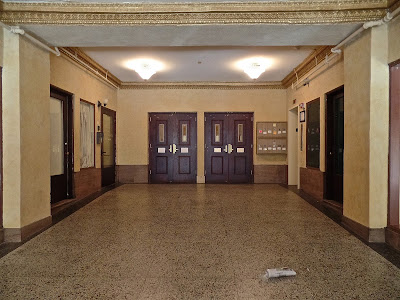 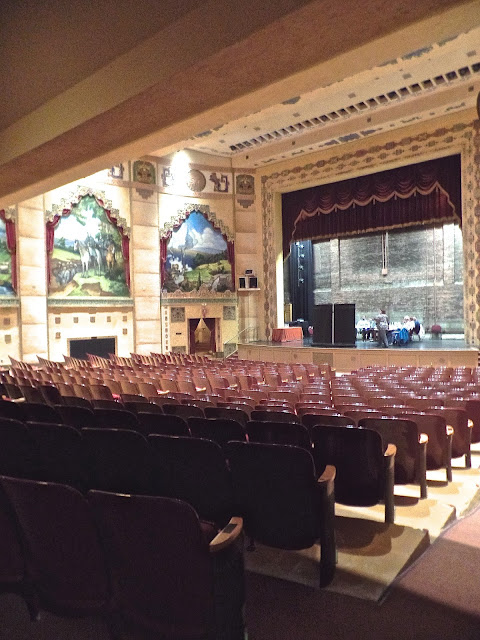 Our short visit was sufficient to let us know that stopping by for a show at some point in time, should be added to our list of things to do.

Coincidentally, the guide locked the theatre doors as we left....oops!   Guess we weren't supposed to just walk in!

And in Virginia nearby is Hungry Mother State Park.  Curious name...beautiful hills and lake, with a morbid reason for the name.  Related to an Indian battle, which resulted in settler Molly Marley and her baby being captured, they escaped but while on the run, the mother died.  When a search party found the toddler, the only words the toddler could say were "Hungry Mother."  Thus the park honors the solemnity of this event. 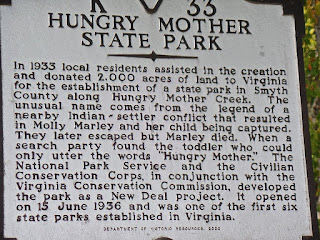 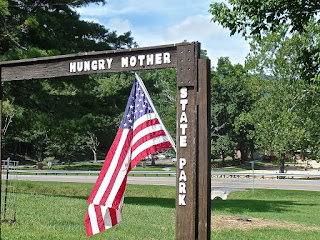 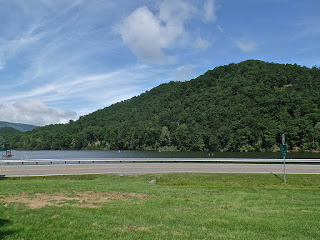 Mandy
Posted by Mandy Sherman at 4:23 AM