Finally...the day of the rehearsal, and rehearsal dinner, arrived.  Our son's big day was getting closer!   I was wearing a pair of women's black dress slacks, a polo shirt, pantyhose and flats, and carrying my purse (with my camera stuff visible._  No makeup, no jewelry (at my wife's request.)  There were no issues, from my wife, the restaurant, or the guests.

We had over 40 folks in attendance, mostly friends and relatives of the bride (and groom, too.)  It was nice to be able to meet some of the bride''s family...   But my wife and I were the first to arrive, and found that the venue had moved our dinner from one room (where we had given them a floor plan) to another.  That meant we had to rearrange tables and chairs as best we could, in preparations for the 40 guests.

And then we also discovered that their strongest server, who was assigned to us and whom we had met just the day before when checking arrangements, had called off sick.   Translation - we got a substitute, who was good, but perhaps not as good!  He really had to hustle his buns to take care of us (drink service and clearing the tables)  Fortunately the food was a serve-yourself buffet, so nobody went hungry!

The food was tasty, and the problems were transparent to most of the guests, but we were upset.  As a result, in response to our complaints, management gave us coupons for some free dinners...which we shared with the bride's parents, since they live in the area.

The kids' wedding day was spectacular - from the weather standpoint as well as the big event itself.  It was an outside wedding, but the reception hall on site was big enough to accommodate the expected 150 - 200 guests inside in case of rain, as well as hold the tables for the reception.   For me, it was a big day of meeting new people, in my men's suit (a so-very-rare occurrence), women's black trouser socks and ballet flats, with my purse containing my camera stuff.  (Three elastic button extenders from JC Penney took care of my shirt's tight neck issue...and it looks OK with a tie.  As long as I don't remove the suit coat, exposing the oversize shirt sleeves, it works fine.  That has bought time to search for a proper shirt - without the rush.)

My wife continued to insist that I have my hair in a ponytail.  I had agreed to do it,  so I complied, and she bobby-pinned the loose ends down for me that morning.   It made her  happy that I looked like a boy...and you know the old saying "happy wife, happy life."  So, I tolerated the inconvenience for that one day.  There was no wind to tear my hair apart, so it worked just fine. There were no "miss-identifications" (well. at least none that she heard.)  So it was a happy day for her.  And there was nary a peep about my shiny nails...I presume that issue is behind us now.

However, there WERE a few "miss-identifications (which fortunately, my wife didn''t hear.)  In the pavilion's main hallway, a couple of times elderly relatives I hadn't met yet, scooted past me with "Excuse me, Miss."  (They obviously need a visit to the optometrist - a men's suit is undeniably a men's suit! Or possibly they were distracted by my purse and flats?)

Toward the end of the afternoon, the bluegrass band playing outside (all relatives - and definitely not amateurs - the music was very good) stopped at about 3:45 and they started to clean up.  My wife and I were sitting in chairs belonging to one of the band members (the bride's uncle.)  When he gave us the carriers for them, so we could put them on their truck when we were done, he addressed us as "ladies."  Fortunately my wife was deep in conversation with the bride and her aunt, and none of them paid attention to the "ladies" part.  Surely everyone knew my gender by then, from my participation as father of the groom, that I have long hair?  Could it be confusion over my "now exclusively female" name in the program?  Or was he making some kind of a statement?   Details about that may come to light later...

Just as an aside, the maid of honor (who is the bride's BFF) is a lesbian, with a female life partner.  And it is a known fact - they're definitely "out."  Lovely ladies, I might add!  (That might be a good indicator of possible future acceptance, if I should unavoidably be seen in a dress at some point.)   Maybe the bride's uncle assumed my wife and I were lesbians as well?  So, go figure!  It was very interesting.

Below is a picture of the view from the site of the outdoor wedding.  Simply spectacular backdrop for their ceremony! 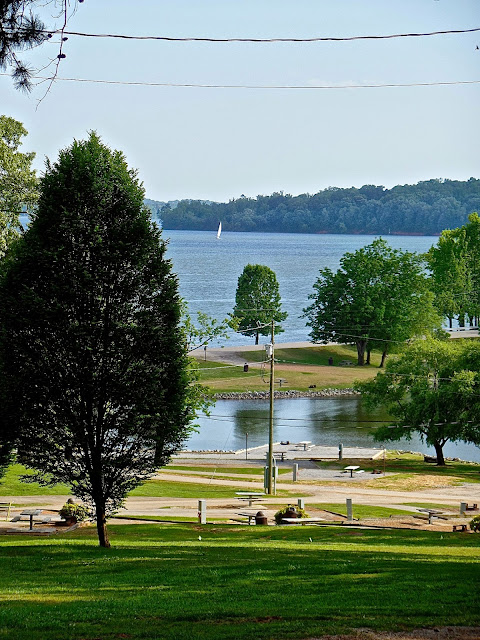 Many things are on my calendar for the next week or so.  Thus bear with me, if posts are scarce.  Enjoy your May!

Posted by Mandy Sherman at 3:06 AM