First visit to Mom's after OBX, and the DQ...

And it was a tough visit at the nursing home.  She seems to have forgotten who she is, who she married, and who I am.

But what she remembered was amazing....the names of her father's brothers and her mother's sister, and was asking me where they all are living now.  (Which is "in the cemetery."   If they were still alive, they'd be from 120 to 130 years old.)  I managed to get her back on track before I left, but it wasn't easy to keep redirecting her limited thought processes.   From prior experience, I initially believed this was something I would go through after trips in excess of two weeks.  Guess not...we were only gone a week this time!

As I left the nursing home that day, a little excitement occurred.  One of the new elderly male residents and his middle-age kids were sitting in the chairs out front - the first time this season the weather has been suitable for that.  I smiled and said "hi" to them as I walked by on my way to the car.  Then, as I continued walking away, I heard the resident said to the kids something like "she has nice long hair."    The female said "Dad, I'm almost sure that's a guy." I simply kept on walking to my car, and by then I was beyond hearing range.   Apparently my typical summer outfit of shorts, a women's polo top and fisherman sandals, with a purse, weren't enough cues to pass that particular female's eye...

Wow - 40,000 page views!   Thanks to each of you who stopped by and made this milestone possible!

As for the DQ - how many folks thought I meant Dairy Queen?  Gotcha...it's the Delta Queen!   Our new D-I-L shared a picture she took of the Delta Queen leaving Chattanooga for New Orleans, where it will be refurbished for service. 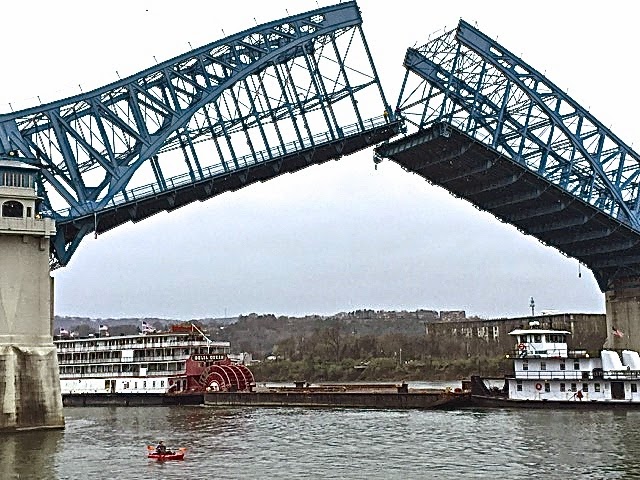 
Maybe someday I'll get to ride her...   Unlike a cruise, a riverboat doesn't normally get too far from land!