There's not a lot of interest going on at the present time...so posts may be scarce for a while.

Yesterday, in preparation for an upcoming planned solo excursion, I dropped in at the nail salon for a fill.  And there were a lot of us there...all trying to look our best for the upcoming summer season.  My outfit was an un-tucked sleeveless t-shirt-type top, over a thin white tank top (with a glimpse of white showing at the arm holes, hinting at a bra underneath, but there really wasn't...), a pair of shorts, and strappy sandals (with my pink pedicure showing.)  Given my purse, long nails, hairless arms and  "winter white" legs, I apparently looked more than a bit girly.  And after being welcomed as "Miss Mandy" by my tech in front of the ladies...well, you get the picture.

One woman was sitting alone at the drying table, while the rest of us were being worked on.  My tech had to take a few minutes to wax a lady's eyebrows.  So I initiated a conversation with the "lone" woman, in my "normal" voice.  And she picked right up...keeping our conversation going...by asking me about my nails.  I got up, walked over to stand next to her - and we each made appropriate compliments about each others' nails.  She wanted to know all about mine, which don't require drying.  That was good for a fabulous discussion.  She particularly liked the fact that "we can put on our flats or heels immediately after our pedicures, without having to wait 10 or 15 minutes at the drying table"  like she currently is doing.   Another acrylic customer for the salon?  Very likely...

Then she noticed my (mother's) necklace, which nowadays, I almost always wear, and which my wife has developed a sort of blindness to...except for certain functions like our son's recent wedding!   The lady also has her mother's jewelry, and hadn't thought about wearing it.  Then she noticed that my ears aren't pierced, and suggested that step for me.  "Most women have them nowadays."  I just left it that "Mom doesn't have pierced ears either, and she has a bunch of earrings, so I haven't taken that step.  I'd really like to do it.  Just not right now..."

Then my tech came out from the waxing room and it was "back to work on your nails!"  The rest of my visit was totally un-remarkable, though my new friend (Lisa was her name) said stopped by to say "so long" when she left.

Our neighborhood has started an internet group to communicate.  My wife wasn't interested in joining.  But we've heard about it from others and she agreed that we might want a presence,  if nothing more than to see what everyone talks about on line...  And it goes without saying, that we won't participate much.  I somewhat reluctantly joined.

Remember that my real given name is now used by females, and there is already a female in the area with the same given name.  She's been introduced at some of the parties we've attended as "the pretty one."  But, it's really anybody's guess what the result would be, if she and I stood hip-to-hip and arm-in-arm, both wearing the same dresses and heels, being fully made up, with brightly polished nails and me with a more feminine hairdo.  (It could be a bit closer vote...one never knows.)

And obviously, not everyone knows me.  Some of the neighborhood women (probably the ones who don't attend social functions to meet their neighbors) have been using the email group's welcoming feature to "welcome" each other - and me - aboard.  Not so much the men.   Only a couple men have responded. It's a girl thing.

Yet, I find that somewhat interesting - are those who don't know me assigning a gender by virtue of my name?  Especially by the newer residents, who haven't met me yet?  They may get a bit of a shock when we eventually meet!   This happened to our long-haired son too, at his first year in college - his male "nickname" ends in "y" but somewhere along the official line that got switched to "ie."  Needless to say, the lucky boy didn't accept the invitation "s/he" received with his first year's registration packet, to join a sorority....LOL!  And other than the long hair, he clearly was a guy...

Oh, well - I can be a girl or a guy, and the way I dress daily "typically" indicates female.  So it's fine by me.  I answer to "Ma'am,"  "Miss," and other feminine form of address, as well as (grudgingly, "Sir.")   But I can clean up fairly well, as you can see from this picture a couple years back... Here I am, outside my hotel room at the motel, ready for dinner. 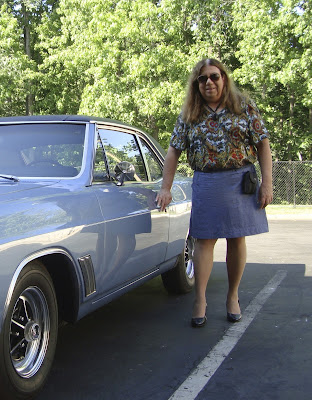 From the archives, a couple years ago...in Fredericksburg, VA:

Blue is obviously my favorite color...that skirt almost matches my car (that's why I bought the skirt!)  Maybe blue isn't just for boys after all...

Mandy
Posted by Mandy Sherman at 3:54 AM