Of cyborgs, coffee pots and locks...


While I work on the blog for the rest of our trip, here are pics of a few sights we found along the way...fortunately the weather was accommodating and perfect for sightseeing!

Buena Vista, VA (a few miles off Interstate 81) was our chosen stop this time.  We had been in town once before, about 6 years ago, when transporting an antique car (that we bought, and subsequently sold) back east.  It experienced major air conditioning failure, necessitating finding a motel about lunchtime, because of extreme heat (mid 90's) and the "mom & pop" motel in town let us check in at that early hour.  (Try that at your "big box motel." Typically it's "your room won't be ready till after 3PM.")   At that time, we didn't know any of the following sights existed, and found them only on this visit.

First up, is an adaptation of the "Muffler Man" concept.  It was reportedly built by a relative of singer Patsy Cline's husband, and erected in 2013, so it's not really an antique.  Yet.  It's located at an automotive recycling yard in Buena Vista (a few miles off I-81.  Notice the "mini-me" cyborg in his tummy, operating the controls!   Standing on the dis-used cab of an 18-wheeler, he cuts an impressive pose!

Cyborg Muffler Man is not yet well-known, but he can be found on-line already.   Doesn't take long for these things to become legendary! 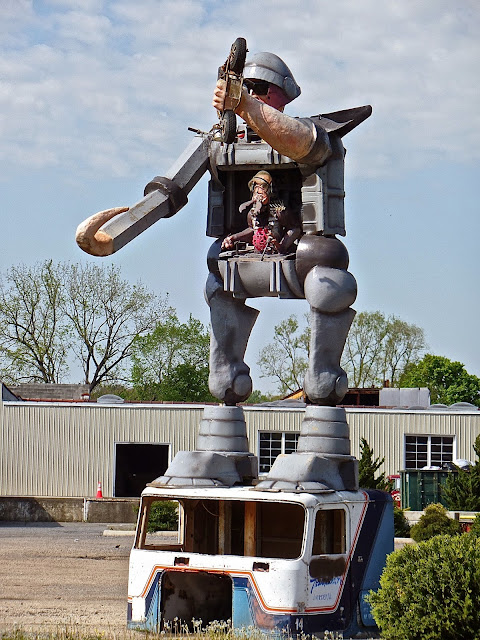 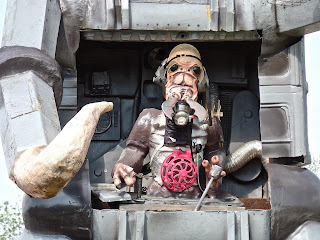 Mini-me Cyborg at the controls.  Note the claw-like hand on the big one!

And on the way out of Buena Vista ("good view" in Spanish) on the road to Lexington, we stopped for a quick picture of "the coffee pot" building.  Built in the 1950's, it was operated as a restaurant for a while, then in the '90's as a canoe rental operation, and in 2010 as a fresh fish market.  By 2012 it had reportedly closed.

But the distinctive "coffee pot" or "teapot" shape remains...very nice (and hard to get a picture of, due to "no shoulder" on the road out of Buena Vista.)  Notice its round style, the "spout" on the left, and the black "handle" just visible on the right.  Keep that camera ready for a pic on the run! 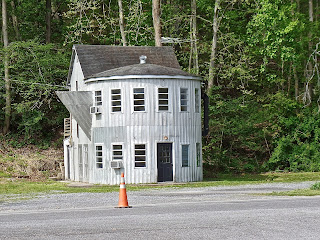 A bit farther west on the same road, was the reconstructed Ben Salem Lock, Maury River, a part of the James River and Kanawha Canal (which I never knew existed.)  Built circa 1858, it connected the town of Lexington to the James River, a major artery of commerce.  It would be a wonderful local park for a picnic...but I don't live there. 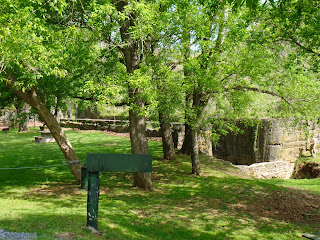 You never know when the next interesting site will turn up.  That's why I always carry a camera in my purse during my travels!

Mandy
Posted by Mandy Sherman at 3:32 AM