Last Thursday was my dentist appointment day.  When I make the effort to cross the Bay Bridge alone, there usually are a number of stops to make.  And it's lots more fun to do as many as possible in a skirt.  Initially, I planned to appear for my dentist appointment in androgynous mode, and then find a place to pull over in the wooded areas near there, to change shoes and get into a skirt for the rest of the day.

Initially, all went very well...I put on my necklace, engagement ring and earrings, then went into the grocery store for a few things, something planned for later but which would save backtracking if done now.  Fabulous reception...definitely accepted as a woman (even in stirrup pants and flats), and had some small-talk with the cashier.  On to the bank, where it was exactly the same situation.  After the bank, I removed my "bling."  (That would have been too much to wear at the dentist, since my wife also goes there.)

The dentist's front office had its usual bevy of staff trainees, so I got some confused looks.  They obviously "saw what they saw", but, as Pat said in one of her earlier posts. were having some confusion in "processing it".   The little lady who led me to the exam room omitted any greeting - instead using my full name.  Of course, the dentist knows me, as I've been going there for almost 20 years We're on a first-name basis.   Likewise, the male dental hygienist, who was "careful not to splash you and ruin your makeup." He obviously "knows".   As I left, the girls in the front simply said a cheery good bye, and omitted the "Sir or Ma'am".  That's OK by me.

I soon began to realize that I had miscalculated my ability to find a place to pull over and change into a skirt.   That became quite evident as the three planned pullover locations were either under snow piles left over from plowing the roads, or axle-deep in water and muck from the melted snow.  So I headed for the little park with the paved parking lot, where the following pic was taken a couple years ago: 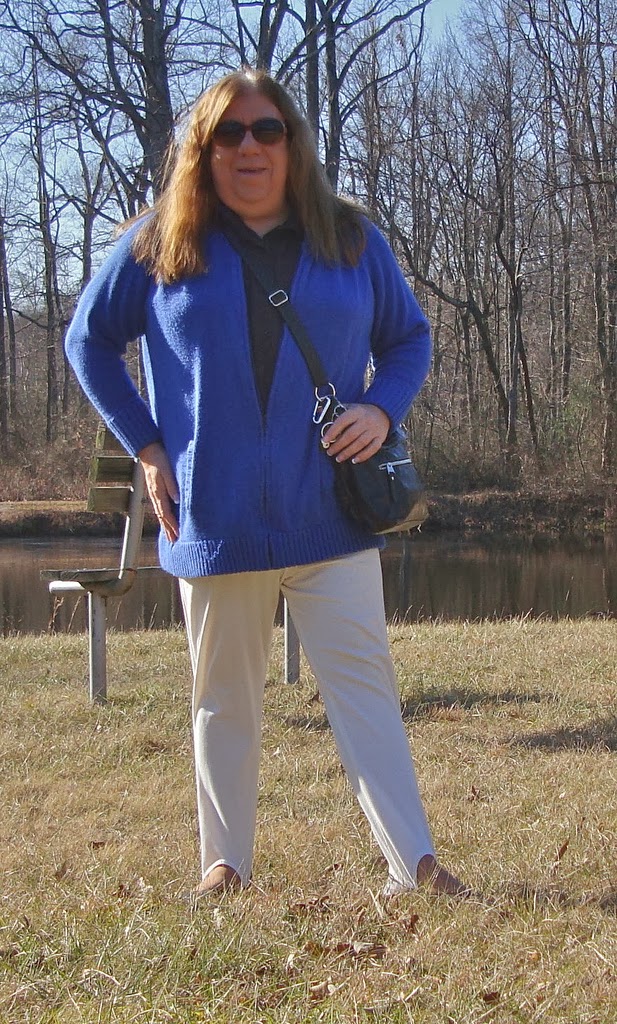 Its parking lot was plowed clean, the lake was frozen, and the grass was partially snow covered.  I figured it wouldn't be a good place for fishing or just relaxing in the sun right now... a real no-brainer.  But again, I was mistaken.   A fortysomething guy was ahead of me, cleaning out the garbage from his car (filling the trash can to overflowing in the process), and upon finishing, practicing his golf swing.   Hmmmmm.  Maybe he was waiting for a train?  Oops, no tracks - minor detail.  The nearest ones (a mile away) were torn up 50 years ago - well before he was born. After a few minutes, when he didn't leave, I did - discretion is always the better part of valor.  Who knows what suspicious (or outright illegal) activities were about to take place?   I didn't need to become a part of that action...

As I was motoring to the next stop, my cell phone rang.  That's never a good thing, particularly with an elderly parent.  The call (received on a hands-free device to save a ticket in Maryland) was from Mom's nursing home, with disturbing news about a change in policy affecting an appointment Mother had the next day (fortunately not about her health, which is currently fairly good.)  This new issue totally distracted my concentration, and any enthusiasm I had for hunting a place to change into a skirt, simply evaporated.

At my next stop - the copy shop - I simply put on my bling again, and added the MJ's in the parking lot.  As I walked past a restaurant window, I glanced in and noted that I was getting some attention from guys sitting by the window.  But, did i hear "Sir"(or "Ma'am") from the ladies at the copy shop?  Nope. Neither.

With my concentration still totally distracted. I stopped at a big box store nearby, for a couple items and some relatively inexpensive gas.  Then, right there in the parking lot at the gas station, off came the bling and the MJ heels. They and the skirt went back in the trunk, and I headed east.  No chance to try another wig shop (if it was even "still there"), and no visit to Goodwill (the charity shop.)  Not quite the turn of events which had been planned...

But there will be other chances.