All too soon, it was time to head north!


All too soon it was time to head for the next section of the trip, to the kids’ house in TN.   After loading the car, I checked out at the front desk…”Thanks for staying with us, Ma’am.  Have a nice day.”  My reply: “You too, hon!”   I’ll never know if she wondered about 2 women sleeping in the same bed…

This trip was rather uneventful…except for noticing a lot of tree damage along I-75 (presumably from Hurricane Michael.)

I was still dressed in stirrup pants, but now black tights instead of pantyhose, as the weather was cooler.   (And the ever-present danger of their many pets snagging delicate nylons with their claws!)  On several occasions when we were all out together, I was interpreted as female, but it was very casual and I don’t think the kids noticed.  Or if they did, nothing was said.

When we arrived at the kids’ house, we knew everyone.  So, the rest of the time, I was identified as male.

During our visit we went sightseeing in the Chattanooga area.   And had lunch at: 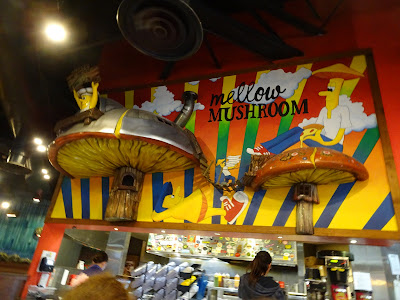 That’s right, the Mellow Mushroom.   It’s allegedly a chain, with an interesting title and a fascinating sign.  The food was tasty and reasonably priced, but service was a bit slow.   And afterward we took in some of the civil war battlefields in that historic area.   My presentation was such that I was seen as a male.  Amazing how that works one way in one area, and the opposite elsewhere.

On the way home, the evening motel clerk had no trouble identifying my male persona. But the morning clerk - and breakfast room staff - with me wearing the same outfit - all female.   Amazing how that can happen!

Just off I-81 in Winchester, VA came this reminder that we're back in winter country: 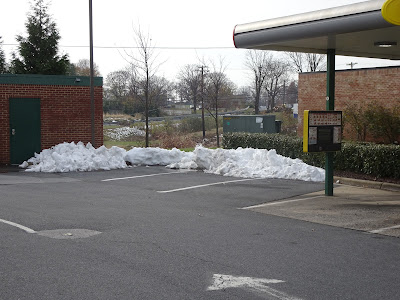 Snowbanks from the several inch snow fall of 3 days previously.  Fortunately, the roads were clear - potholed but clear!

And several hours later, our long but enjoyable visit was fully concluded, with us able to spend the first night in several weeks in our own home.   Traveling is fun...but now, home for a while.