The next day's excursion was to visit Lake Placid, NY – site of the 1932 and 1980 Winter Olympics.  My outfit was a white skort, black top,  makeup, necklace, 2 silver bracelets, pearl earrings, bra and silicone inserts, as you can see below.

It was a 4+ hour drive from the previous stop, and I made a pit stop at the High Peaks North rest stop on I-87, which was close to the turnoff for Lake Placid, and about 35 miles south of the Canadian border.  Way upstate!  What a surprise…not only did they have the usual men’s and women’s rooms, but also a very nice single restroom marked “Unisex.”  Which I used.

This is much better wording than at some of the other rest stops I visited in NY, which had their  single restrooms specifically marked for use by "families with children."    I have no problem with the unisex label, but I'm not particularly fond of the term “families with children.”   That could lead to confrontations with those who hate us…and could also be problems for a couple without kids, one of whom needs assistance from the spouse.   Can't you just imagine someone shouting as they go in  - "Hey you dumb s**ts, can't you read?  Or maybe you're blind...  That's reserved for families with kids."

But I’m not the one in charge…

At High Peaks, I also noticed what I believe to be a bear-proof garbage container…humans had to work to get it open, with a hidden latch.  No way a bear would get in...without smashing it to smithereens.

After the rest stop, I drove on to Lake Placid and filled the gas tank.  When I paid for the gas, I heard “Ma’am.” I was wearing a skort, and the clerk made the judgement call as “female.”  I told him that I needed to change into something more useful, and he showed me to the women’s room,   There I  changed into shorts – the motel I was using was “mom & pop” and I didn’t want to “stampede the horses.”  As it turned out, what I wore wouldn't have mattered.  My makeup and jewelry were visible, the desk clerk was a guy, and after checking me in (addressing me as Ms.,) he enthusiastically carried my suitcases up to the room on the second floor.

Then, since it was clear outside, and I had lots of time, I changed back into my skort and drove toward Whiteface Mountain - a misnomer in the summertime, as it was very green.  On the way, I passed through North Pole, NY.  As a sidelight, I can remember sending letters to "Santa Claus" there, when I was young... 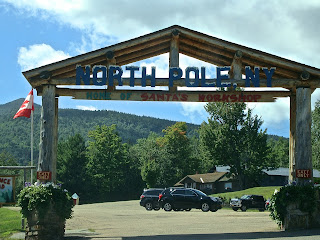 I passed by "Santa's Workshop" - and promptly left that for the kiddies!   Onward I drove, up to the top of Whiteface, elev. 4,700 ft  - more or less.  Wonderful views, and hairpin turns...    A couple hundred folks of all ages were up there with me on the mountaintop, including in the gift shop, with no issues.   And the view was spectacular, with visibility of 40-50 miles.   Following is a view of Lake Placid from "the top."  It's just one of many spectacular views... 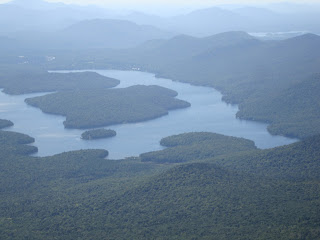 All was fine and dandy, until in the parking lot on my way back to the car, when a little girl in a departing vehicle, which had slowed to pass me and about 15 other slow-moving pedestrians, looked out the window, presumably at me, and asked, in a loud voice:  “Mommy, is that a man?”   I wasn’t facing her way at that moment, so she got a "side or back" view.  No, I can’t prove she was referring to me…nor could I hear the mother’s response.   Did anyone within earshot care about it?  Not that I could discern.   (The little girl COULD have meant someone else, but I didn’t notice any other trans folks in my group of pedestrians.)   Let's hope the parents had a little "discussion" with their daughter about manners.  Yeah, right - hope springs eternal.

During my visit to Whiteface, I finally managed to find a place to use the self-timer to snap this one picture - on the side of the building away from the lion's share of wind.  Even so, I'm lucky the little remaining wind didn't tip the camera over.  Rocks and cameras don't mix. 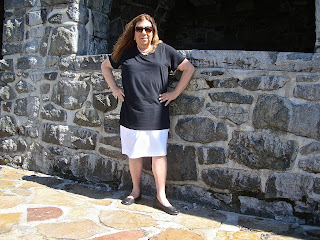 In Lake Placid itself, a bit later that day, a teen girl gave me a close examination as we passed on the street.  From the look of disbelief on her face, obviously my presentation failed in her eyes.  (Sunglasses work wonders.)  Oh, well…her problem to deal with, not mine.  There were no other obvious issues.

At the wonderful (do you sense a hint of sarcasm there?) Mickey D’s dinner (I rebelled at coughing  up "$30+" for a steak dinner - not counting beverage), I heard neither Sir nor Ma’am.  Guess at that point, they didn’t care which gender I was – I was spending money at their place, instead of at the Burger King just down the street.

All in all, a very enjoyable day!

Posted by Mandy Sherman at 2:07 AM