On the road again...

This was the first day of an all-too-rare solo excursion.  In 2016, due to life events, these have been particularly scarce.    There haven't even been any antique auto shows...

My blue shorts, a purple sleeveless top, and flats, with necklace and bracelet, and  casual makeup comprised my outfit.  I was traveling in androgynous mode today… as I was making relatively few stops.   One of these was a men’s room break at a roadside rest area, in which there were a few “looks” but no issues.  (And no unisex restroom.)

When I reached the first night’s motel in upstate New York, a desk clerk apparently paid attention to my bonus points account, and addressed me as “Sir” - despite my makeup, tank top, necklace and bracelet…   No doubt I was clocked...of course that might have also been due to the minor issue with my reservation, which required the assistance of the manager, and adherence to company rules about properly addressing the customer.  No matter...the problems all worked out fine, and I got my room for the price I expected.  Plus, I answer to Ma’am – or Sir - in androgynous mode.

When I had settled into the room, Mandy appeared, as I changed into my purple and blue paisley skirt with black top, bra and silicone enhancers (not full forms) and my Mary Jane heels, as well as additional jewelry, then went sightseeing locally.  One of my objectives was to find the destination for the next day’s tourist railroad ride.  I was successful…and a picture follows.  It was nice to be able to get pictures with nobody else around!   (And as it turned out, the next day was cloudy, thus the picture wouldn't have been as colorful.) 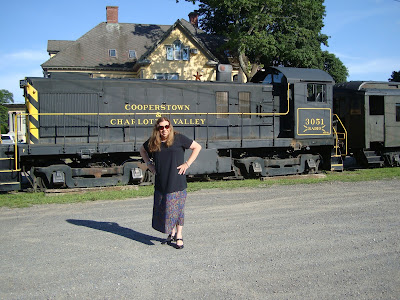 On my way back to my hotel, I passed a small lake with a dam, and what appeared to be hydroelectric capability.   A sign by the road indicated that Colliers Dam was initially built in 1907 to supply electricity for the local trolleys and for several small villages nearby.   Info I found on line shows that it continued to supply power until 1969, when the New York State Electric and Gas Company, who had taken it over, finally turned out the lights and locked the doors.   In 1974 they unsuccessfully attempted to sell the dam.   And there it sits. 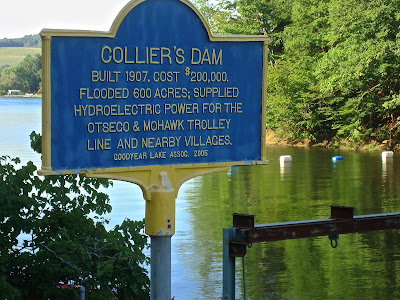 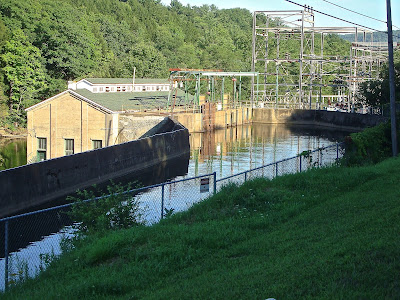 Too bad the small renewable energy operations like this tend to fail.

Then it was back to the motel.  With a long day behind me, I was more than ready to hit the sack…

Mandy
Posted by Mandy Sherman at 3:33 AM