A reflection of reality...


I  didn’t hear my alarm that fifth morning, so I must have been tired.  But after a quick shower, I shaved and got dressed, did my makeup and put on the purple paisley skirt (again) with the bright blue ¾ sleeve top, full makeup, jewelry, and bra with light padding.

Another quick run to Mickey D's (cheap and close) got me another McMuffin and another cheery "Thank you, Sir" from the female clerk.  Oh, well - there's two rotten apples in "that there barrel."   I know I didn't look THAT bad...   She ought to take the time to get to know some of us...we're decent people, just trying to live our own lives.   And what we do with ours, doesn't affect hers at all.

Having a couple of hours to spare before leaving town, I checked out of the motel (no issue about my outfit from the clerk) and headed for Saranac Lake.  That was the destination town for the rail excursion the day before.  I had walked around a small part of town, and wanted to find the rest of it, plus the lake.

On the way in, I passed the lake, and stopped for some morning pictures.   This one is interesting...check out the cloud reflections in the water by the dock...sort of reminds you of characters in a foreign language.
A young couple brought their dogs in by boat...one was a Shepherd and I think the other was a Rottweiler.  They started acting up as the boat neared the dock, and they pulled the woman holding their leashes out of the boat quite violently just as it touched the dock.  I was getting a bit worried, as I could see that the animals were not under control.  Fighting off two biting dogs would not have been easy,  even if the ensuing massive lawsuits ended up providing me with "Christmas In July".   However, as it turned out, my worry was unfounded.  They both simply had to pee!  From then on, they were very well-behaved... 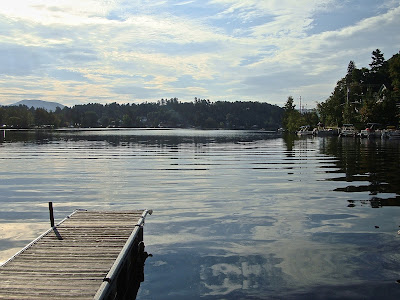 It was early, but the women (tourists and residents) I passed all cheerily said good morning, as did some of the older men.    But generally, this girl in a skirt attracted no attention, other than that of being a visitor (walking around with camera in hand and taking pictures is a fairly good clue!) 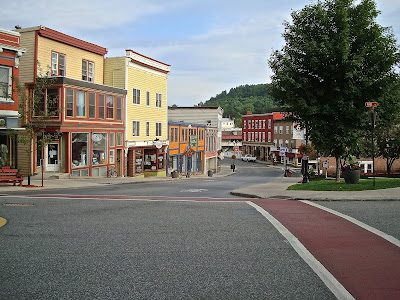 It's an old and very well-kept business district, seemingly somewhat smaller than Lake Placid, and a bit less commercial.  Not too many vacant store fronts.  It would be fun to come back here one day, particularly after the renovations to the old hotel are finished.  In fairness, when the hotel was built back in the Roaring 20's, folks used to come in from the big cities by train - the hotel's only a few blocks from the station.  But now the only train is the one from Lake Placid and the State is trying to end that service, to rip up the tracks and open a hiking and snow mobile trail.   That should be decided by the end of the year.   I hope it doesn't happen...the train ride is very nice. 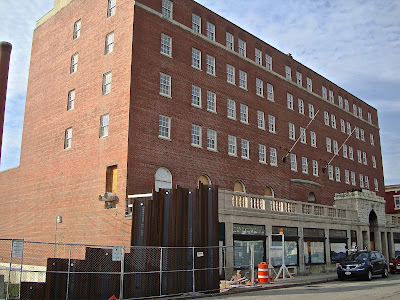 I finished walking around in Saranac Lake, and it was time to head home.   But I couldn't resist taking one more picture in town.   It represents a reflection of a wonderful little town, and Mandy's really nice trip...exemplified in the window of the Saranac Hotel, under renovation. 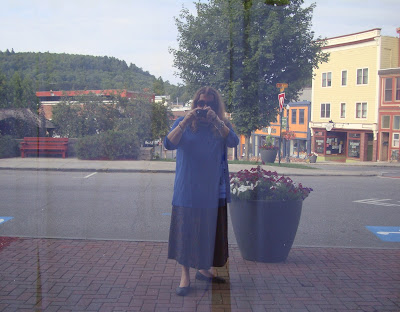 With the simple act of turning the ignition key, my long ride home began.   For some odd reason, the trip south was shorter than the trip north.  (It always works that way!)    When I got to the hotel that night,  I was about halfway home,  and close to the next day's tourist destination:  Centralia, PA.  But that's for the final chapter of this travelogue.

Mandy was addressed as, and treated as, female by the staff.  It was very affirming, and everyone was very friendly.  (Even the female server in the restaurant, who omitted all gender-specific references.) In addition, the female desk clerk promptly gave me a better rate than on my reservation…it was a girl thing, she said (I noticed by listening, that the previous customer - also a female, got a reduced rate.   Nice!)

A toast to another fabulous girl-day!!!!