Posts have been quite scarce lately as there really hasn't been much new to talk about...until now.

Recently I had to make a visit to the emergency room, for some severe intestinal distress.  My wife came along, as we weren't sure if I would be able to drive, due to meds I might receive and the distance from home.  I was dressed in stirrup pants, women's tee, women's black trouser socks and ballet flats, with my purse (and of course my nails and long hair.)

Similar to my visit in November (post on 12/2 - The Past Couple Weeks), I was frequently "miss-identified."   This began with the triage nurse, who addressed me as "Ma'am" and gave me the women's instructions for providing urine samples.  It continued on into the exam room, where a couple of the nurses "miss-identified" me, and others simply followed suit.  At those moments, I was glad my wife was still out in the waiting room.  But I finally called her to come into the exam room and sit with me, due to the long delay.  Fortunately the nurse who addressed me as "Sir," did so with my wife sitting there...a small favor for sure! (Not sure how she'd have dealt with everyone addressing me as a woman.)

I left the ER with prescriptions in hand, and the good news is: several days later, I'm feeling much better.

But I really do wonder what the documents they reviewed actually list as my gender.   Or what would happen if I cane in with some "male" - as opposed to something common to both sexes - ailment?  I know the records at my Primary Care physician are correct...and the specialists as well.   Though even there, I'm occasionally "misgendered."  Mostly by newbie staff, I suspect.

A few days later,  I showed up at the office supply store as they opened, dressed in open-toe sandals, capris, a tee, with necklace, men's watch, my purse, and permanent accoutrements (long hair and nails.)  The manager greeted me as female, as did the clerks at the service desk.  And to cap it off, one of the clerks said "Have a nice day, Ma'am" as I left.

From there I went to the nursing home, where Mother was waiting for an aide to help her to the toilet. When the aide (a newbie) appeared, she told me I could stay in the room to wait if it was OK with Mom.  Which, of course, it was...

Eavesdropping, I overheard Mom tell the aide that "someone stole her bra."  Which probably wasn't how it actually happened...more than likely her name tag fell off and the bra became an orphan in the laundry system.   So the aide told me, as she should have.

I asked Mom if she knew her size, which of course, she didn't.  I asked the aide if she'd care to guess, to give me a starting point, since I haven't seen Mom standing up and out of a wheelchair in over 4 years.  "I'd guess somewhere around a (insert conventional bra size here)."  I thanked her and without even thinking about it, said "I have some bras at home" (and neglected to mention that they're Mom's), "so I'll find one that looks close to that size, and bring it in to try on.  If it doesn't fit, it'll help us narrow down her size, and I'll buy her a couple new ones.  If the band is just a bit too tight I'll add a band extender.   But this time around her name will be indelibly printed on it, not just a label."

The aide thought that would work, and being finished, she smiled and left.  About an hour later, as I was driving home, the thought hit me...I may have just outed myself!  What cis-male knows anything about bras, other than perhaps how to get one off a woman?  And the aide had no way to know that I have a suitcase full of Mom's underthings in the basement, from when her house was sold.  Of course,  maybe she simply thinks I'm female, by the way I was dressed, and willing to "share with my mother."  We'll see how she greets me the next time we meet.

Mother didn't seem too worried, though.  To her, I'll always be her little boy, no matter what I wear.
And I took the opportunity to point out that being known as a girl will make wearing a dress next Halloween (if it actually happens) seem all the more appropriate...

My last stop that day was the (new) nail salon, where I got a pedicure.  A male tech did my pedi, and he did not treat me any differently from the other girls, including offering his hand to help "madame" into and out of the chair.   (Which I graciously accepted....it's a long step.)  I think I've established myself as female there...

For those of you who may have wondered what winter in the Rockies and Sierras look like from ground level instead of 35,000 ft,  here you go...in this 2004 picture from my archives, notice that snow is halfway up the lower level windows on a Superliner - and in places it was "over" those windows. 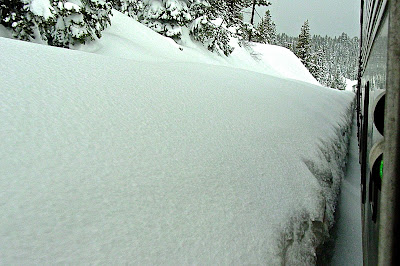 Certainly a very spectacular ride...one I'll long remember! (Bet everyone out west wishes the snow pack in the mountains had been that deep each winter since then...)

Below is a picture of Ahwahnee Lodge in Yosemite National Park, also during the winter of 2004.  Everyone visits in the summertime, but winter gives you a much better view of the park "sans humans."   And wildlife is not hidden by the forest. 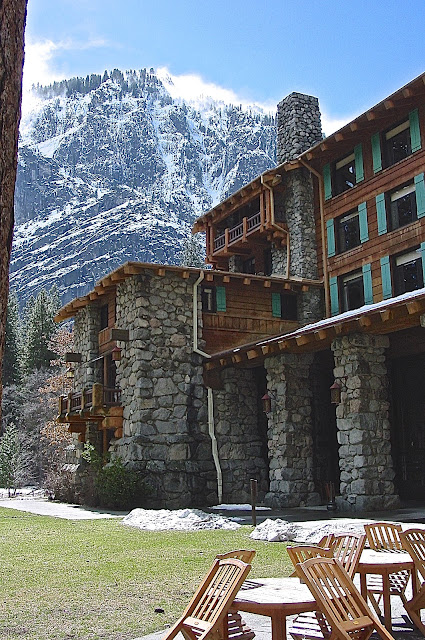 Not too many people sat at those outdoor tables in January of 2004...

That's all for now, folks!

Posted by Mandy Sherman at 4:17 AM