Too much of nothing...


April, May and June have traditionally been months for some of my antique car related activities.  But not this year.  In April I had a couple of shows planned, but for various reasons, they didn't work out.   And we had planned a car tour along with a visit to our son's place down south in May.  That trip fell apart, due to a May stint requiring me to be available for jury duty.  Thus it had to be  moved forward into June.   Then there was all the rain, from late April into May, spoiling many weekends.

The end result of all this change is that Mandy has not seen the light of day since the antique auto test trip to Assateague Island back in March.  And that was a "quick change trip", where I did not really have a chance to go fully femme.   I left the house, and returned home, wearing androgynous clothes and only light makeup.  The skirt, jewelry and lipstick appeared "in cornfields," which for some odd reason, didn't have any corn yet!

Unfortunately, this forecast leaves no hope whatsoever for a "March encore," at least until July.

Below is a photo taken in front of a C-130 transport on display in the National Vigilance Park, off of the Baltimore-Washington Parkway, taken in mid-2013. 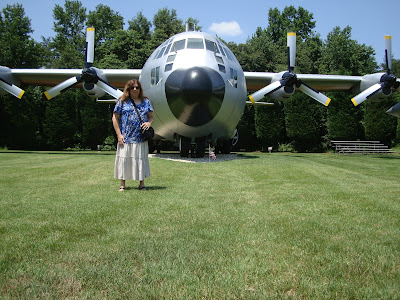 All is not bad...during the current "dry spell," excursions in capri pants and tops continue, as do occasional meals out with my wife.  We often find ourselves addressed as "ladies."  But I truly am looking forward to putting together something in July, though at the moment, I'm not sure what - or where - that might be.

Meanwhile, I leave you with this skyline shot of St. Louis, as it appeared from Amtrak's Texas Eagle back in early 2009... 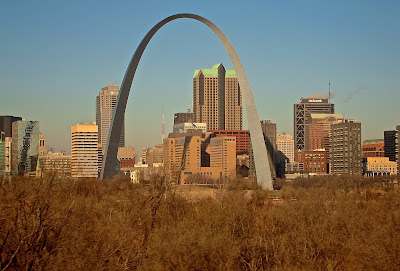 Mandy
Posted by Mandy Sherman at 9:26 AM