Some days you can't win a nickel!

Another quickie:  illustrating that some days you can't win a nickel!

I needed to pick up some new turn signal bulbs for the antique, and decided to try the "other" parts store in town instead of the one where the "clerk in a skirt" (mentioned in previous posts) used to work.  At that "other" establishment,  they had the bulbs I needed, but I was repeatedly addressed as "Sir" (despite my rather-obviously-feminine capris, tunic, flats, purse and long hair. )  And the clerks all wore a uniform...company logo shirt, long black pants and all-black sneakers.  Not a skirt or flats in sight, nor did I see evidence of any women working there.  :-(

So apparently, (s)he's disappeared...and since I've been treated better at the establishment where (s)he used to work, I guess I'll keep patronizing them!

Over a recent weekend I took my antique to its first car show of the season.  And there, despite my typical feminine outfit, I frequently heard the dreaded "S" word...only rarely did people so much as omit a gendered greeting for me.   Judging from the number of "Make America Great Again" hats, full Duck-Dynasty-style beards, and the like, that was to be expected...   And disappointingly, it was one of the good-old-boy types of shows, where "You vote for my car. I'll vote for yours, and we'll both win"  is the order of the day.  They won.  I didn't.

One thing about being at that particular show...representatives from other shows this season were there, and based on the number of show fliers that I received, more than one tree was killed to make the stack of papers possible.  I don't plan to go to many local shows this year, but at least now I have several to choose from.

But not all was 100% bad...the next day I stopped at the pharmacy for some sunscreen...and since I used my wife's card there,  I was addressed by her name...several times.  Which was fine with me.  I mentioned the issue to my wife in passing, and she didn't believe it.  But she's impersonated me by name several times, and I have now "passed" as her several times.  We're about even...and it was fun.

I'll leave you with the following picture from my archives:  taken at a scenic overlook along the Pacific Coast Highway  (California State Route 1) in the Central Coast area, if memory serves me correctly.  Gorgeous weather for sightseeing, and calm seas, back in January of 2007. 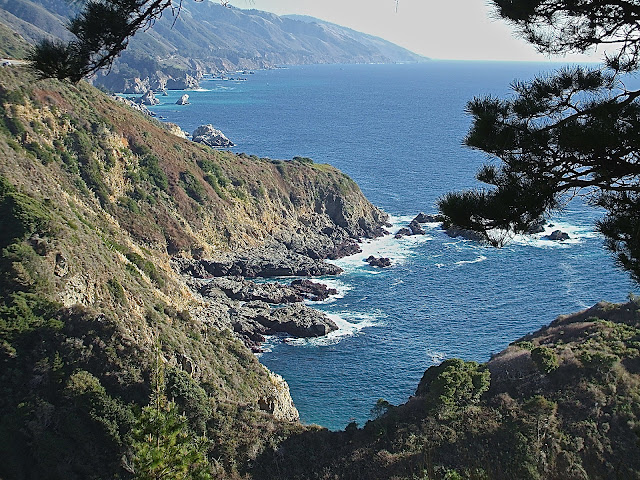 If my memory is off a bit on the location, I'll leave it to you California Girls to correct me!