Since my last update on the model railroad situation in January - "A Watched Pot Never Boils" - my model trains haven't turned a wheel.  I picked up replacement items recommended by the tech, and he agreed to come by the house to install them.  But due to weather in February and his own car problems (and our travel) in March, it never happened.

Until this week.  He came by, and this time there was no "gender confusion" with my appearance (despite my feminine outfit.)  He did a professional job of installing everything - all the parts I bought were necessary to make things work again.  But given the fact that neither train had been run in over 9 months, the tracks have become dirty from household dust and possible oxidation.  That's causing signal and power fluctuations to the trains, with some arcing from the power contact wheels.  So, I'll need to clean the tracks.  He gave me instructions of what to get, so I'll receive the performance the trains are capable of providing.   My plan is to pick up the supplies "on the other side" as we head south for the wedding...but running trains a lot will help, even before I clean the tracks by hand.

It was great to be able to "Highball" some trains again, after such a long dormancy...here are a couple of pictures of my newly-reopened railroad: 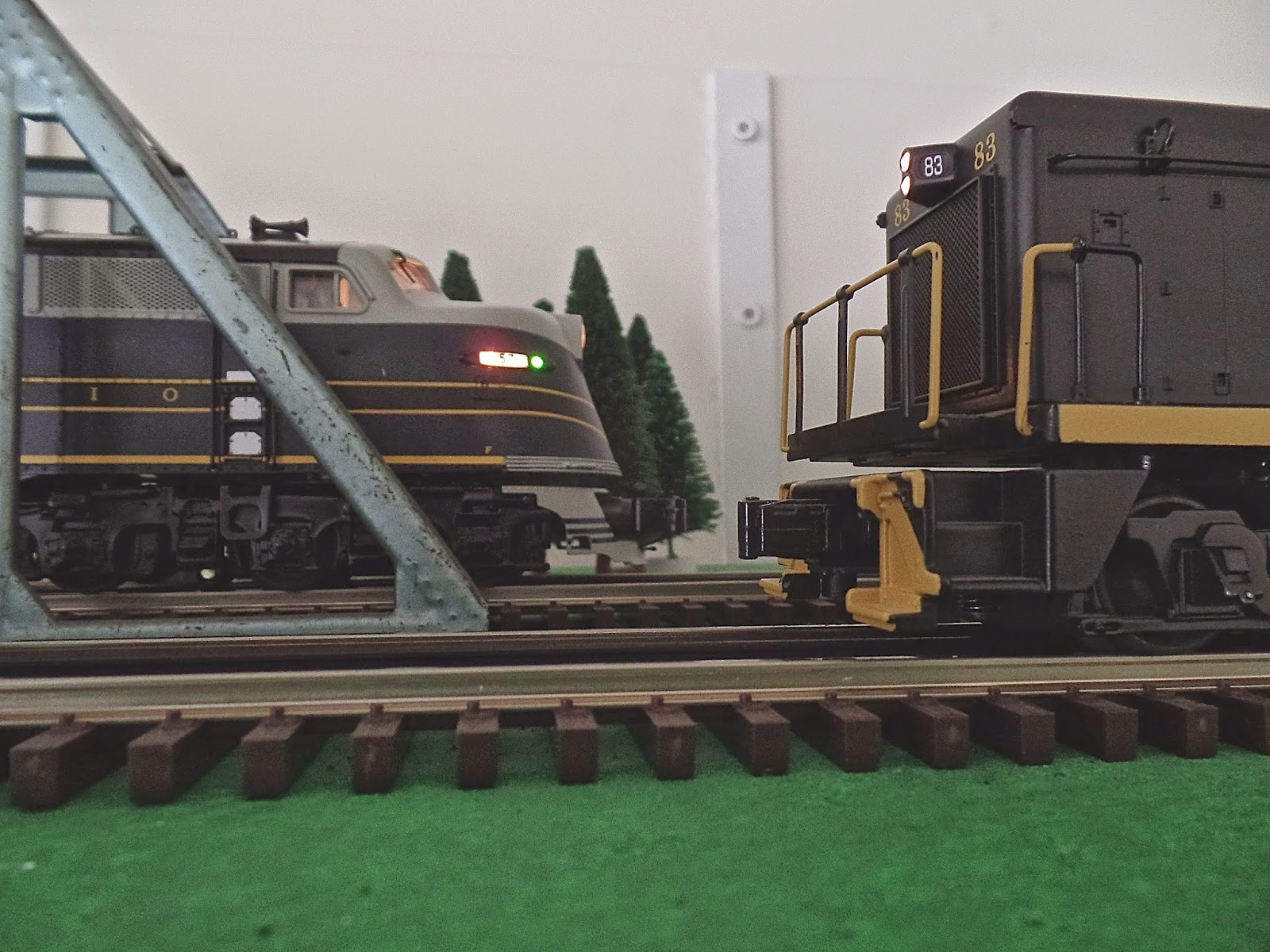 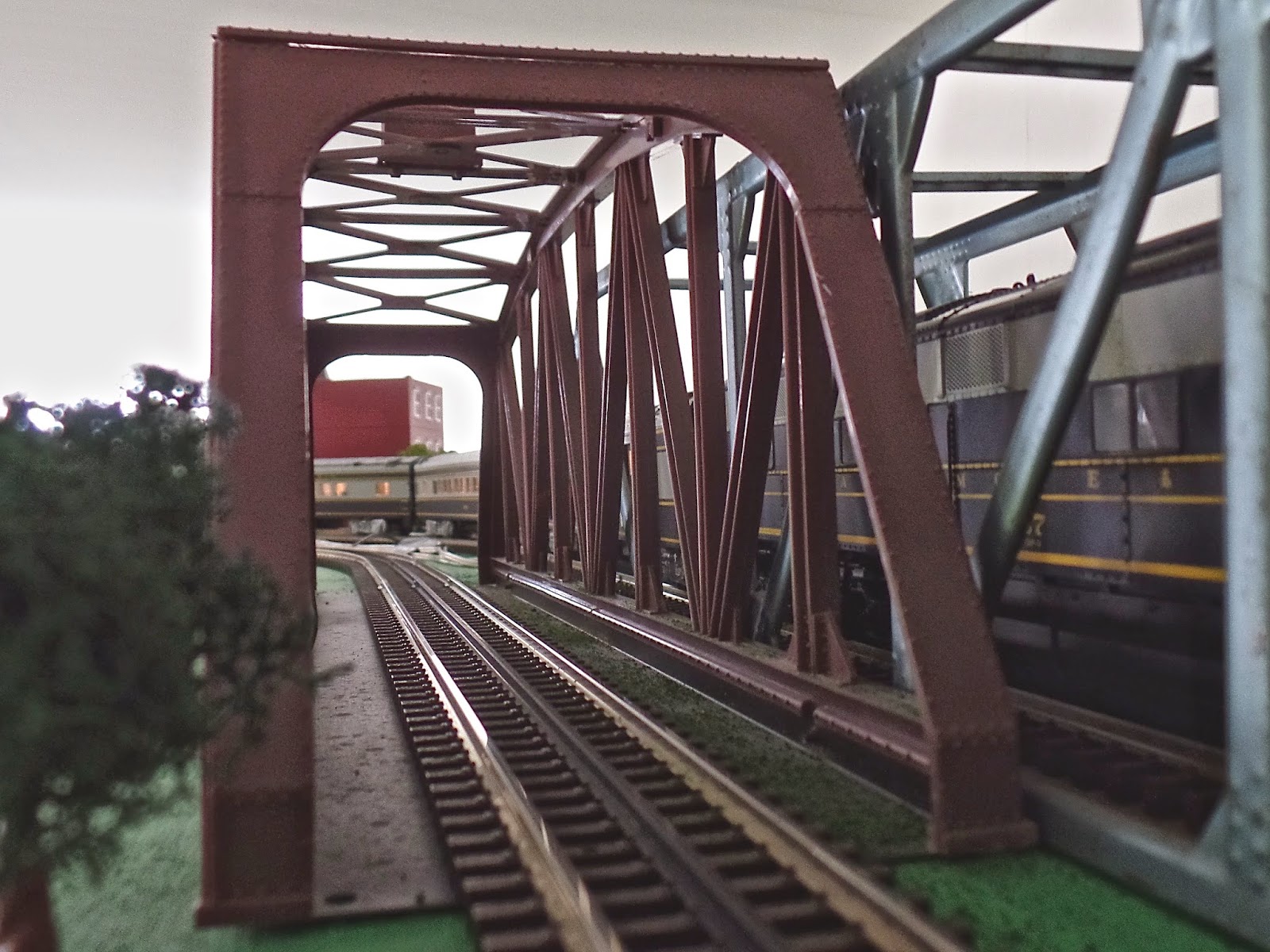 It looks like I'll be following Marian's and Pat's suggestions about the shirt sleeve length for my new suit.

No stores that I visited today on "this" side of the bridge, sell short sleeve dress shirts.   Six different venues.   We don't have a big and tall place here, but I've found out from trying on shirts, that even if we did, sizing isn't at all consistent.  Unfortunately, 1+1 is not necessarily 2, and trying on is a requirement..

Before leaving this morning, I measured my neck size as 17".  So, I went into a Joseph A Bank store, and they had me try on a 17-1/2 neck shirt, knowingly with sleeves too long and body too big.  The neck fit me just fine. But the $70 shirt didn't. The clerk said they can provide one with the proper sleeve length, and for a small charge ($15) can take in the oversize body. But they can't take in the "balloony-ness" of the sleeves (to coin a term) without an even larger alteration charge - if the tailor would even be willing to attempt it.  So, I could easily become the proud (?) owner of one shirt, for which I paid well over 2/3 the cost of the $150 suit!  That's just not economical - or practical.  So, we left.

My only problem with that approach: the overlap will be visible if I take my jacket off.  So I'll be stuck in the jacket, even if it's 90 degrees out.  Thus, changing clothes will be required as soon as the ceremony and pics are over.   I'll see if she can put the overlap where I can at least take off the coat and roll up the sleeves to disguise it...in case for some reason I can't change for a while.

What a surprise...we're having an alterations place hem the pants...they'll be done next Friday!