Monday night we had a snowstorm...with apologies to those buried in the heavy snow areas of the northeast US, it was "only" about 5" deep.   I had gone outside early in the morning, in my women's jogging suit and a turtleneck, to move the cars around and put the iced-up, snowy one inside the garage to begin to melt off.   And while I was busily doing that, a guy and his 3 boys pulled up in front of our place and piled out of their 4WD stretch pickup, with their shovels.

Since they were fresh-looking (translation not cold-soaked and covered in snow), I asked how it was that they chose to stop at my place..."Well, Ma'am, I saw that you were moving cars around and might need the help." "Thanks, gentlemen, I really appreciate your stopping. But first I want to make sure you're sent by the homeowners association, as I don't want to pay extra for a service I've already paid for." They waffled a bit, but gave a believable answer, so I said "as long as I don't pay twice, go ahead. And I really appreciate it."

One man and 3 boys made short work of the snow, even the stuff the plow pushed up from the street. They got into their truck and drove away. If they weren't from the homeowners' association, they were simply helping a damsel in distress. And we didn't have to pay. (But I have their license number just in case it becomes an issue!) Fun part is - as of lunchtime,  nobody else had their sidewalks or driveways shoveled...unless they had done it themselves.

I mentioned the "Ma'am" part to my wife.  Surprisingly, she didn't take exception to it - "as long as they did our shoveling for us. It's like getting help with our luggage when we're on trips." Maybe this is a good sign?

When I came back inside, I changed into my long black jumper dress, black tights and gray turtleneck. Later, I plan to shuffle cars again...this time I won't change... and see if she objects!

So a while after lunch,  I went into the garage again, to move the snow-covered car (which was slowly melting clean in the garage) out to the driveway, to let it get rid of the rest of the snow outside...because the sun was warm.  And I did it in my jumper dress and turtleneck, with black tights, but the top half was covered by a light jacket...   In the process I knocked whatever snow was still on the car roof, off into the snow piles by the driveway.   There were no comments from my wife about my attire, and no "stink eye."

Later, about 4 pm, I pulled on my jacket again, as we went out to put the cars back in their original positions.  I was still wearing my dress, and spent a few minutes shoveling some missed spots on the driveway and front sidewalk...with no comments on my attire from my wife.

Is this a positive thing?  I think so, though I've been out in the garage in a dress before.  And even out to the front yard.  But this was my longest foray by far.  She probably was banking on the fact that nobody was around to see me in a dress, even though I was in plain view.  Some neighbors drove by and waved...I waved back.  She saw.  There may be fallout at the next neighborhood gathering...if so I'll deal with it at that time.  But for now, no problems - the topic is silent.

And I'll try to push that envelope again with the next snow.

For now I'll leave you with a couple of pictures.  First is the view from the Bridge of the NS Savannah, which I visited last October. 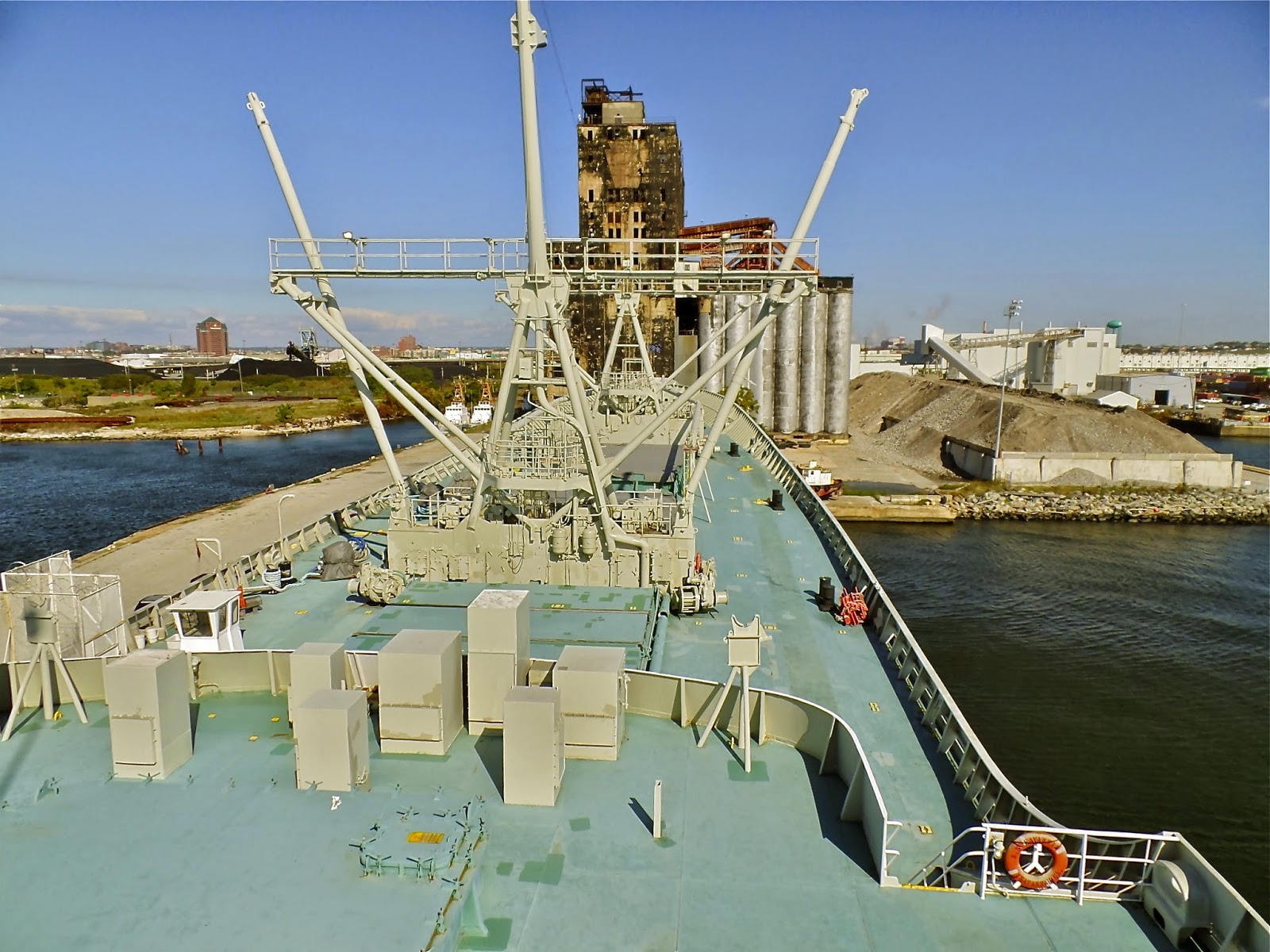 And second is yours truly at the helm of the Savannah.  I blurred the faces of others around me, to protect their identity. 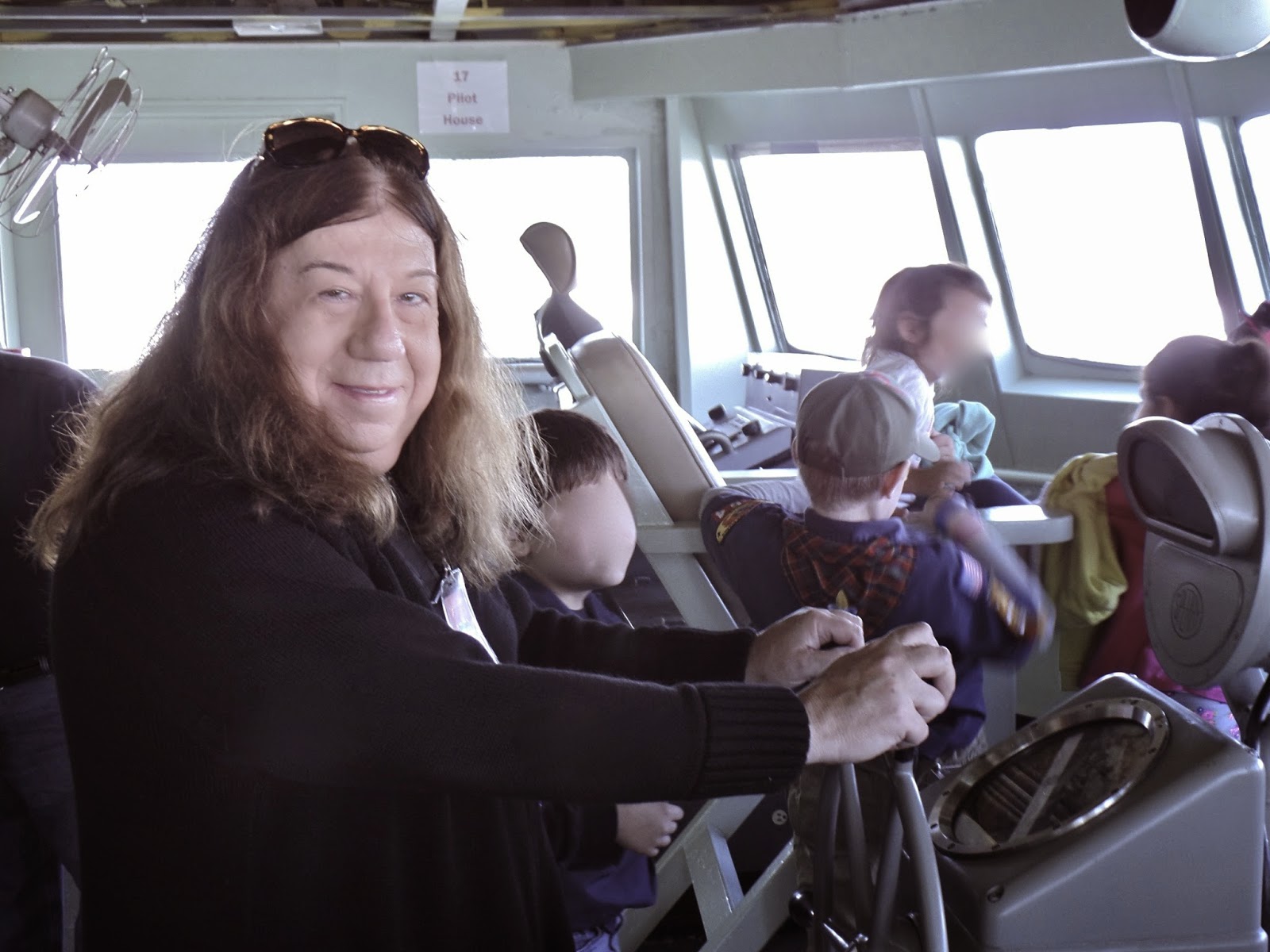 It definitely was a fun day, both then - and now!

Posted by Mandy Sherman at 4:28 PM