A Virus (but not on the computer).

It's been a rough seven days.

Last Friday at noon, I went for my half-mile daily walk - no, not outside, much too cold and windy - in the basement (a certain number of trips around the basement equals a certain number of steps, which approximates a half-mile) to try to get some exercise.  I never have any problems with such walks...but that day, came upstairs feeling undescribably peculiar, not at all normal.  After a smaller-than-usual lunch, the problem became plainly evident - I hadn't run fast enough to outdistance whatever gastrointestinal virus is spreading itself around.

Without providing graphic "TMI" for you, and believe me, there was plenty, let's just say "That's all, folks," for the duration.  Other than required trips to the necessary room, and a couple short forays to the computer, I was down for the count until Monday morning, when I began to feel a bit better and spent more time out of bed.  My wife was very helpful, but as I began recovering Monday, she found we had shared the virus, and the patient became the caregiver...fortunately her version didn't keep her "down and out" as long as mine.  I believe I had the 72 hour version and she had the 24 hour one.

End result is:  nothing got done around the house for the better part of a week, as we tried to keep each other going...fortunately we had everything we needed,  and nobody was forced to make a "store run" under such health conditions.

One of my main issues (besides sleeping a lot) was the inability to eat or drink anything for 2-1/2 days.  This was a two-edged sword.  I dehydrated AND lost weight, removing what was left of the weight a bad medication caused me to gain a few weeks ago, plus some.   And the nurse I called at the doctor's office said I hadn't lost enough to be in the "needs medical attention" category, so I just had to ride it out, since viruses don't respond to antibiotics.  We've all heard it many times before: "If you take nothing, you'll be fine in 7 days.  I can give you antibiotics, and you'll be fine in a week."    It's working that way.

Another issue was that my hands were much shakier than normal for a few days. Amazingly so.  This turned out to be a big problem when shaving.  As I improved, I knew I had to try going out and see how a short trip to the nail salon would work, before I jumped back into the daily routine.  Try shaving (while shaking) sometime.  I'm the poster child for "It didn't work well."  After patching up the nicks, slathering on the antibiotic cream, and waiting till the next day, I tried shaving with my old electric razor.  That helped with the nick situation.  But then I remembered immediately why I wasn't still using the electric:  I had to shave about every two hours to keep the facial rain forest down to a gray and black, scratchy shadow.

That left me completely uncomfortable with my feminine image, though I had little choice in the matter.  I just wasn't ready to grab tissues, styptic pencil and antibiotic cream to stop the bleeding a second day...and had to finally get moving again.  Plus, my nails really needed done.  So, out of the garage I went, regardless.  The image of a girl...in stirrup leggings, pantyhose, flats and a turtleneck.  With a VERY rough face....   Yes, I shaved in the car again in an adjacent parking lot, before going into the salon, and reapplied a little concealer to the damaged areas - it was the only thing I could do.

"Here goes nothing - d**n the torpedoes."   And the car door slammed behind me...

I leave you with a peaceful early-morning scene from the high desert, westbound, taken from the moving train on my (nearly) cross-country jaunt: 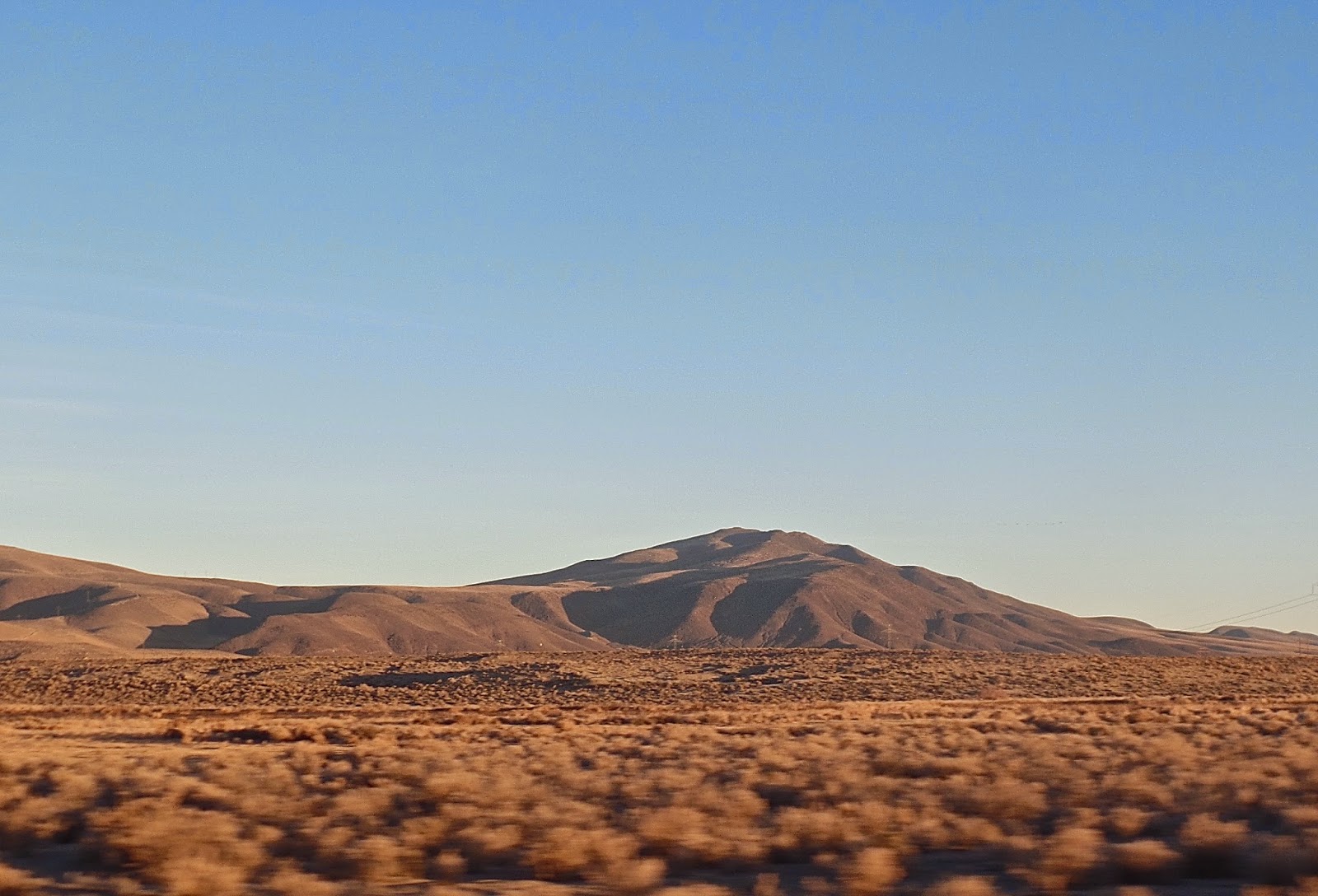