...And it has nothing at all to do with facial hair, razors or shaving cream!

You may be wondering why my posts have been a bit sparse lately.  In addition to the yearly problem during the winter of "noplace to go," I've been having some medical issues, leading to a number of doctor appointments and tests.  (Which so far have all come out "no problem" but still awaiting a few results.)   At one point, though, I was seriously concerned that it might lead to hospitalization.

Well, now - that's not a very good situation for someone whose wife is still not "with the program" at home.  What's a girl to do?  I wasn't willing to purge, and my wife finding a suitcase full of women's clothes in the basement (she's prone to doing periodic clean-ups) wouldn't be a good thing.  So, even though my mother and I aren't currently the same size (at one point we were, since I'm able to wear her stirrup pants),  several months ago when this all started, I added my clothes to the ones Mom no longer wears (the ones we've been storing for her since she became a resident at the home several years ago.)   Sounds like a plan so far - right?

Last week, along comes my wife, in major clean-up mode once again.  (Spring Cleaning?) She goes through Mom's stuff, pulling out a bunch of her things that "haven't been needed", for donation to Charity. And I noticed that the places they were stored (along with my stuff) were now empty.  All gone.  Fortunately, the  donation bags were sitting in the corner, awaiting a trip to the donation center.

Yours truly was not happy...first, and most importantly, Mother COULD wear some of her things if necessary, like if there was a major disaster in the laundry at the nursing home, which ruined some of what she has there.  At least they were hers.  And commercial laundries are notoriously hard on clothes. Even if they don't ruin them immediately, eventually she will be needing them.  Second, I know how tough buying new clothes for Mom would be, on both of us, since she can't go along and try them on.  Buy and return, buy and return.  And lastly, I was concerned that my own skirts and blouses were included in the donation bags (which they ultimately were.)

This little incident was not the high point in our relationship...definitely not a banner day for either of us.  I pointed out that they were not her things, or mine,  to clean up - they belong to my mother, not us, and I never so much as touched her mother's things when we had them in our house.   After much "lively" discussion and some hard feelings, the end result is: Mom's clothes (yes, including mine) are are all piled back in the basement, pending putting away.  And I'm just glad I intercepted the donation before everything went away.  "A close shave," to say the least...

Hopefully, my wife's future clean-up efforts will be limited to items we have acquired but no longer need or use, and she'll keep her mitts off Mother's (and thus my) things.  Fortunately, the hard feelings lasted only one day...that's the good part.  But with my things now commingled in piles with Mom's, and at the moment in plain view, I don't feel comfortable ruffling around in the piles to find an outfit for my next weekend.

So, what's a girl to do?   Retail Therapy!   Off to Willy's  (Goodwill - Willy's, get it?  Bad Pun, Sorry!)  In my size, they didn't have anything with a "pop of color."   That was disappointing.  But calling my name was this outfit...which to me looks sufficiently business-casual for traveling, and nice enough for an evening meal.  It should work with flats or my Mary Jane heels, and look nice with not only black tights, but also nude stockings. 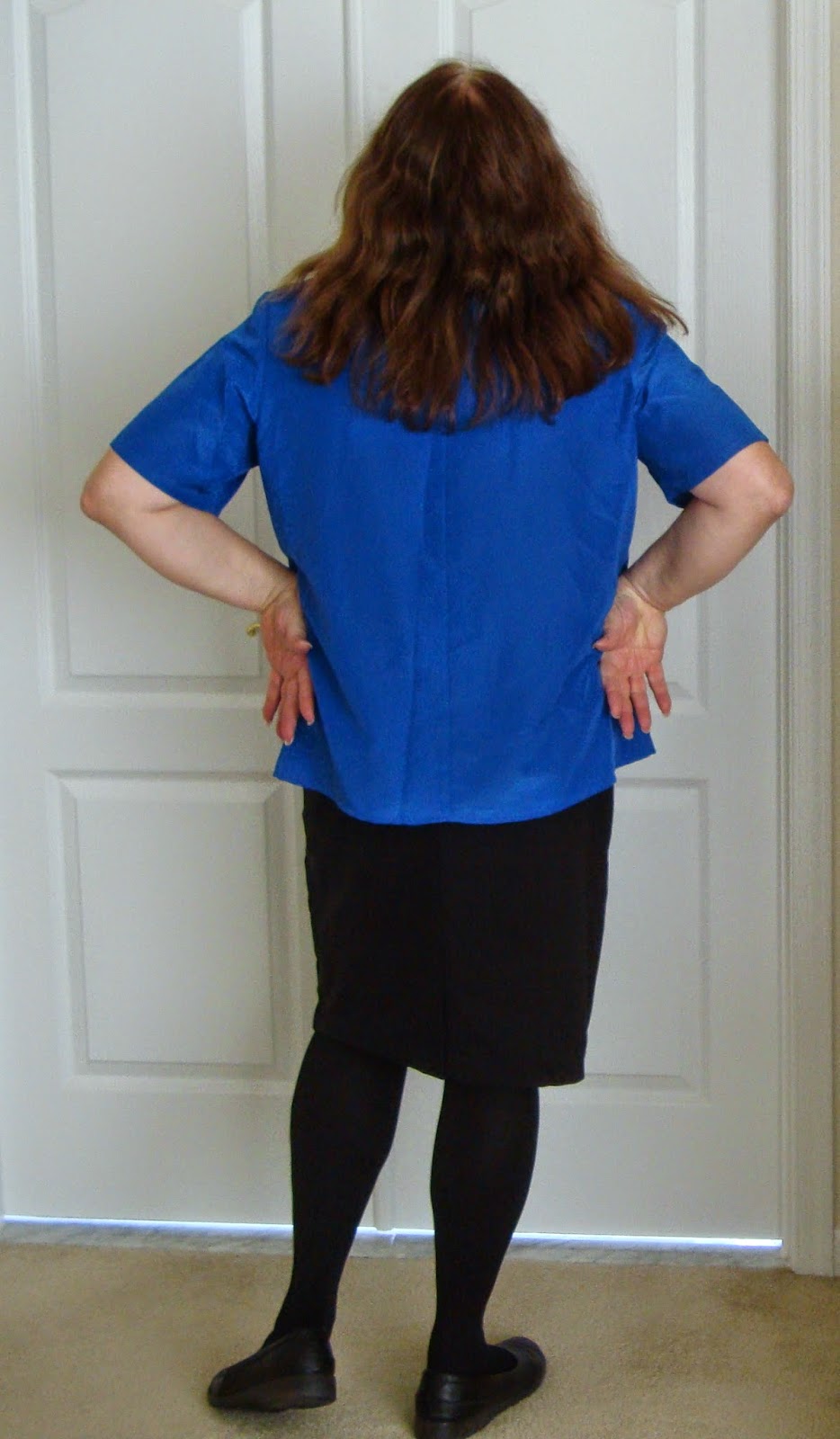 Best part about the skirt is that it was brand new, for $12.  Very comfortable. 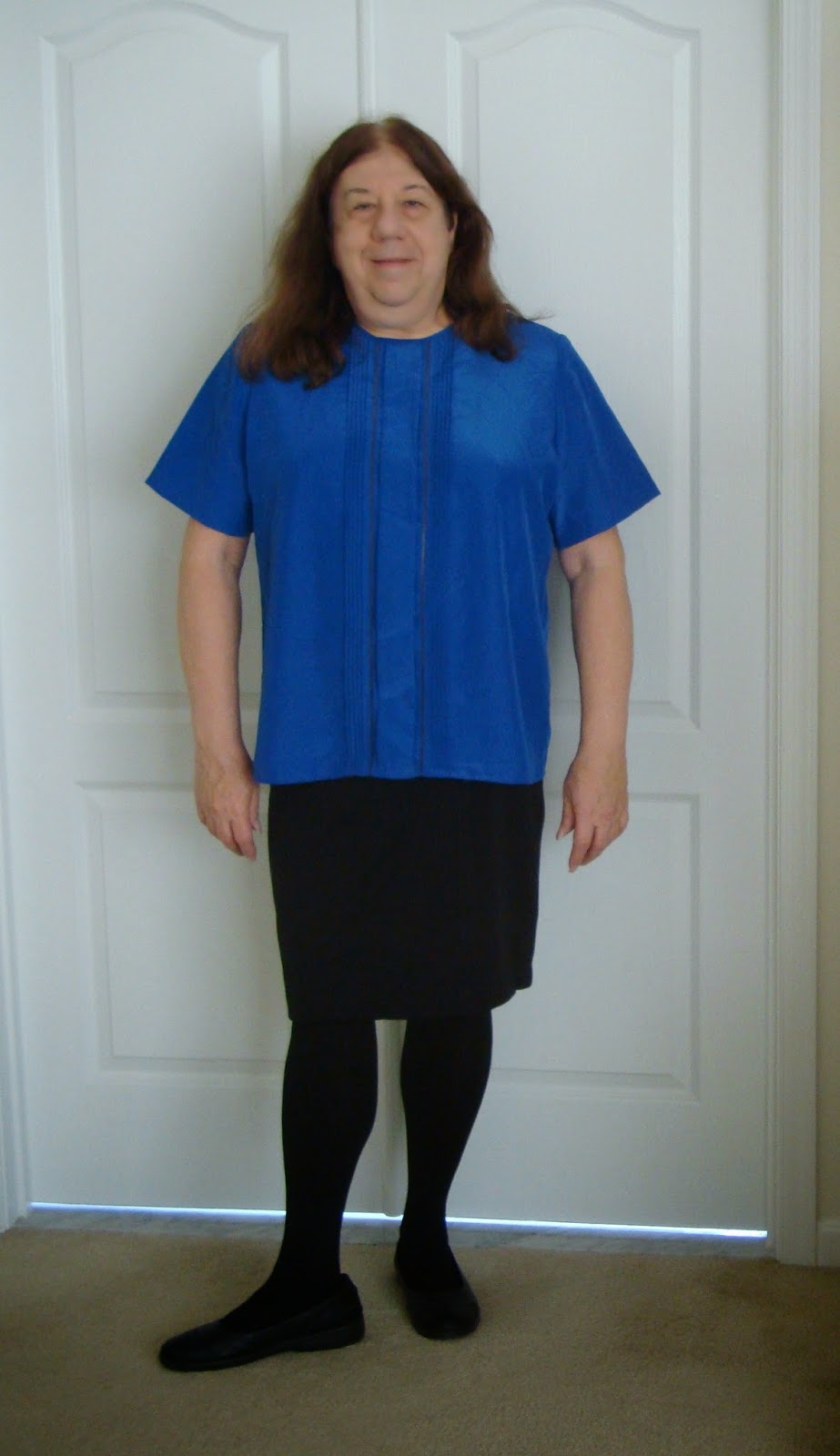 This would also look nice with stiletto heels, I think....

I'm contemplating my silver link necklace and bracelet, and silver clip-on pearl earrings.  What do you think?

Now all I need to do is find a place to wear it....and I'm working on that.