At last!!!   The weather turned out to be beautiful over the weekend.  Though a bit cool, it was far too nice to stay in, and coincidentally was time to take the antique car out for a test run,  checking the myriad of things done to it over the last 12 months.  (Before you ask...it ran perfectly, if not economically - it still gets only 15 mpg, even after the work.  Some things never change.)

The car and I stayed on the Delmarva...there's plenty to see here.  I drove nearly 300 miles, and found a place we've all heard about: "Hell's Half Acre," near Oxford.  If you take a close look at the street sign, that would have been too long, so it was shortened to "Hels."  (Or maybe the short version was the family's name?  Don't know.)

Oxford, one of the oldest towns in Maryland, has a population (2010) of 651, and the town officially marks 1683 as the date of its founding, because in that year it was first named by the Maryland General Assembly as a seaport.   And it was indeed a busy colonial seaport, allegedly second only to Annapolis in business.  But no more... 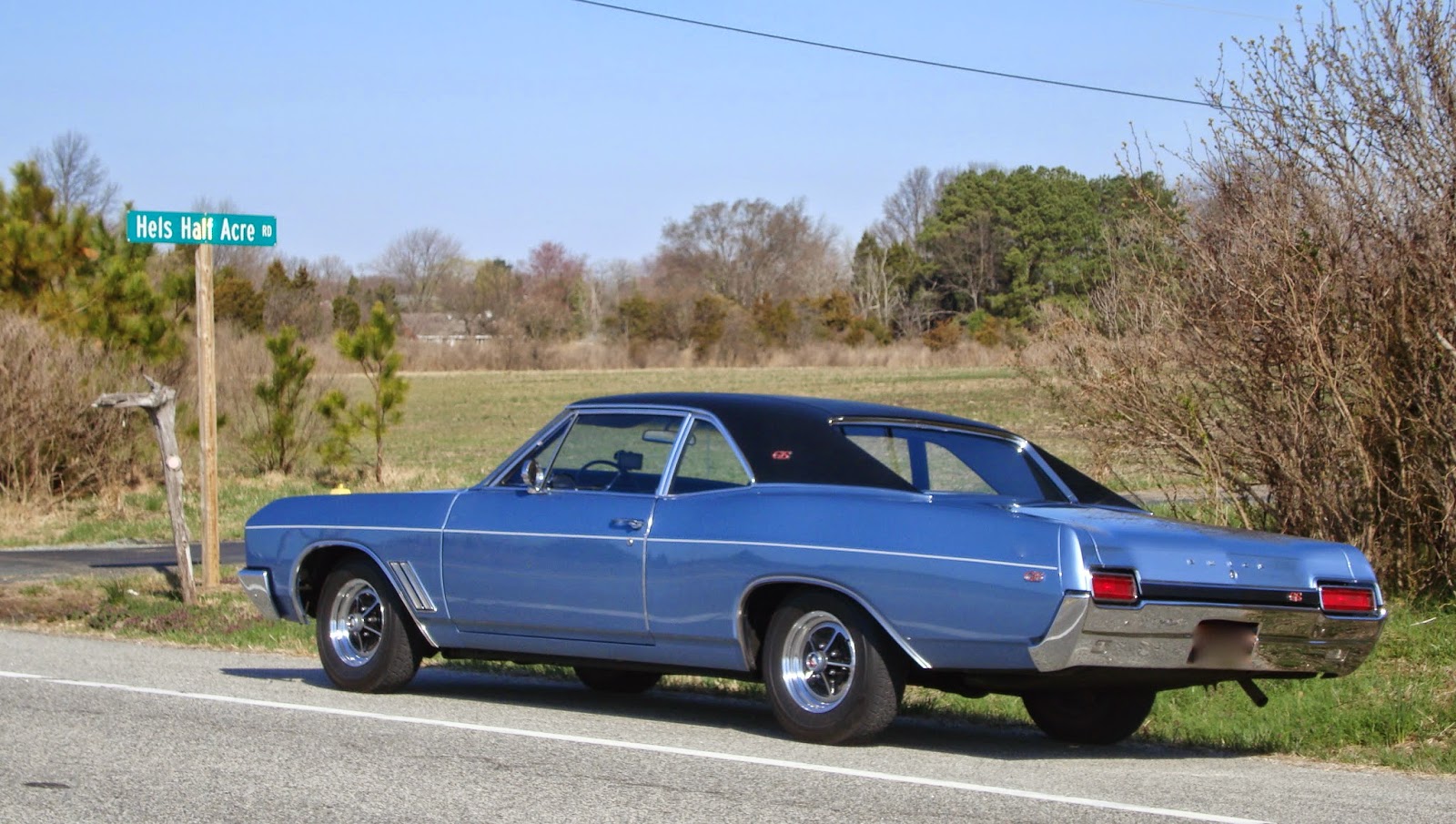 Unfortunately, the shortcut to Nanticoke (my next stop) included the Oxford ferry, which is the oldest privately-operated ferry service still in continuous (though seasonal) use in the United States  However, it was not yet open for the season.

Known today as the Oxford-Bellevue Ferry, it was established in 1683 and continues its service every summer, carrying passengers and their cars across the Tred Avon River.  I noted that the dock had restrooms, which I availed myself of...   Come to find that they built a structure around two porta pots, making them permanently stationary, but they look much more presentable, and in keeping with the local architecture that way. 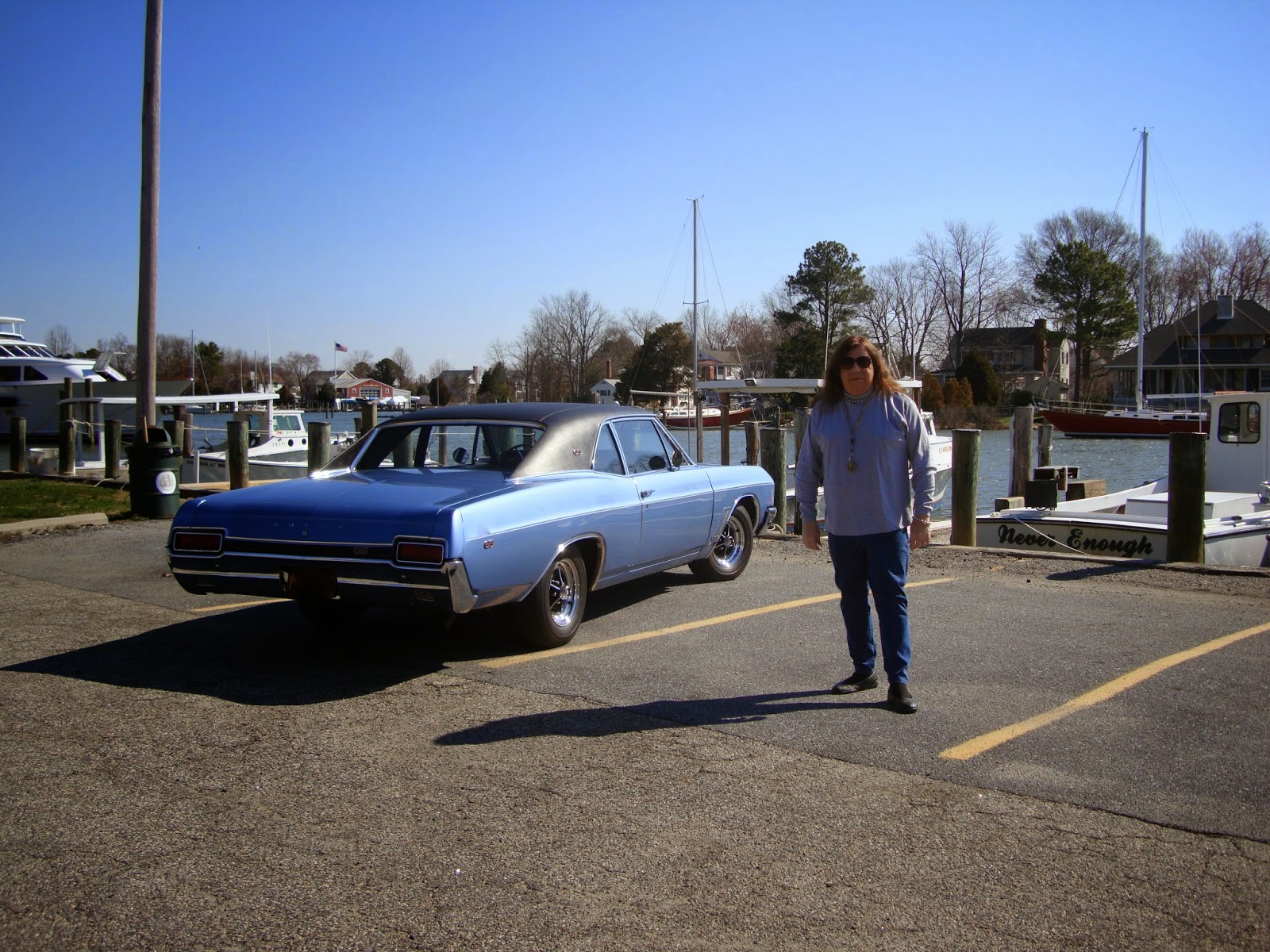 At the dock, in Oxford.  Notice, the wind hadn't picked up yet.  My hair isn't in major disarray "yet"!

After leaving Oxford, I decided to detour by the wig shop my beautician mentioned a while back.  Since time was not an issue, I figured it'd be appropriate to see what they stock.  The good news is: they're still in business!  The bad news is: the area in which they're located is definitely not appropriate for an antique car to be left alone...located between a thrift shop and a beauty salon with low advertised prices, in a tired old strip mall.

I took a chance by parking the antique out in the middle of the lot, with ten or more open spaces all around me.  For a few minutes it shouldn't hurt, right?  I walked in, dressed as shown above (but also carrying my purse).  Frankly, I saw an amazing selection of attractive wigs, in various price ranges (from cheap to O-M-G-expensive.  My beautician was right, they have a good selection.  But there was nobody to help...

Next stop: the counter, where I told the attendant that I needed help fitting a wig (since I know nothing about putting them on, or about hiding my real hair under them) and asked if I need to make an appointment in advance.  "Yes, Ma'am, we'll be able to help you, and no Ma'am, you don't need an appointment."  I thanked him and told him I was short on time today, so "I'll come back another day," and headed back for the car.   Got there just in time to find some folks with 3 kids, in a beat-up 4-door clunker, pulling in right next to me...out in the middle of a still-empty parking lot.   With me standing there watching, they were careful to not dent the antique with their doors.  Who knows what would have happened if I had still been in the store?

OK, time to "make like a shepherd and get the flock out of there...."   So,  a quick turn of the key and I was "on the road again" - toward Nanticoke.  Since I was wearing makeup, lipstick, a matching bracelet and necklace, and engagement ring, I figured it was finally time to get into my skirt.  Found an empty stretch of 2-lane road, away from houses, and pulled over.

Though black tights look great under my black skirt (and it slipped on easy enough over my denim leggings). the leggings themselves were fairly tight, and tough to take off over my legwear in a confined space.  Obviously this was a planning failure on my part.  The steering wheel kept getting in the way, and it isn't one of the new adjustable types.   I struggled for a few minutes -  and finally had no choice but to open the car door.  Then close it, then open it, and close it and open it again, as traffic came and went.   Wonder where that traffic came from, all of a sudden?

Finally, I'd extricated myself from my leggings, but decided there was absolutely no way I'd be putting them back on without leaning on a wall or sitting on a chair.  Definitely NOT in the driver's seat...  And the passenger seat/floor was too full of "stuff" to be helpful (spare parts, tools, food, CD's (yes, I have a CD player in the glove box) and other things I brought along were piled there.  Though that area might be useful for changing if I pack the car differently next time...this time at least, there was no doubt, I was going to be wearing my skirt for the rest of this trip!

Nanticoke is an unincorporated community of about 225,  on the shore of the Nanticoke River, near its mouth.  The area is very flat, and there are quite a few abandoned houses/businesses - apparently common in these formerly bustling communities.  They had a nice little park, with breakwater, which is where I got the only usable picture of me in my new skirt.  It was far too cool because of strong winds, to even think about wearing my "thin" new blouse, and my hairdo completely destroyed itself from gusts, as I set up the tripod and posed for the picture.  So, that was the end of my selfies for the day...

Knowing that real restaurants are at a premium in little towns like this, and the few there are probably like the Oxford Ferry (closed this early in the season),  I came properly equipped with rations.  So I grabbed a quick lunch out of my cooler in the town park, while I was visiting Nanticoke.

En route out of town, I noticed one of the little burgs along the way was named "Bivalve."  It's an unincorporated community of about 210 population, also near the mouth of the Nanticoke River, and it takes its name from the oyster (a bivalve), upon which the town's (and the area's) economy once depended. 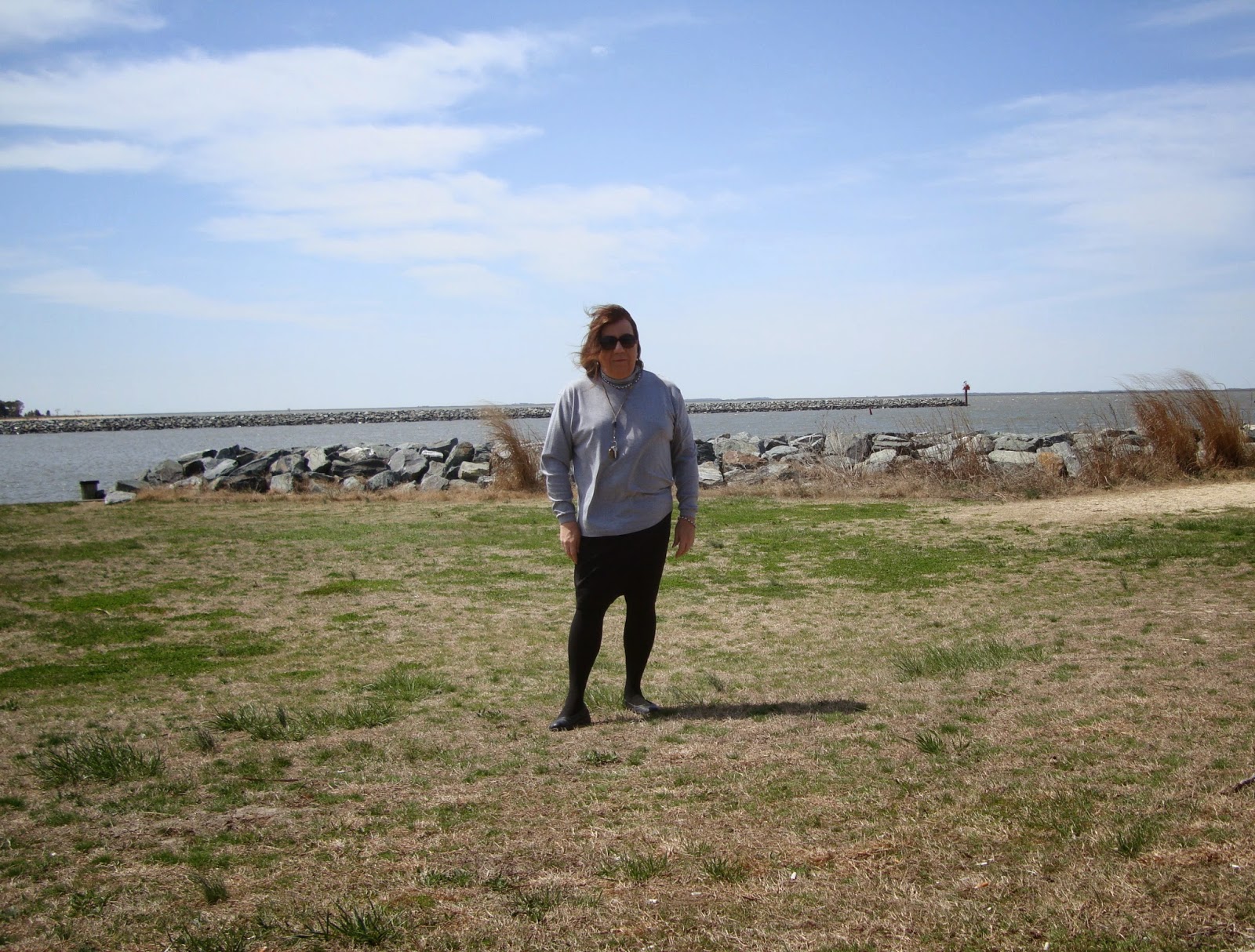 At the park, in Nanticoke.  It was the last semi-decent pic I could get because of the strong winds...from the right in the picture - notice the tall grasses bending to the left!