Out and about again today!

Today was another visit to the Dermatologist, and I knew that I wanted to be as femme as possible while still wearing pants.  So I brought out my new, triple blade razor to try to get the beard under control.  A late shave, and some basic makeup (with lipstick applied in the car), and a hot pink button-down tunic top set the mood for the day.

I had a number of errands to run enroute to the doctor's office.  First was a visit to the bank.  The  female teller noticed, and wanted to know all about, my nails...fortunately she was gabbing with me  when there was no line! And from the nature of the discussion, she presumed that I was a woman:  (...How long have you worn them?   Can you get them in colors?  Do you paint over them when you want to change your color?  And so on.)  Was it my nails, my lipstick or my blouse that was the cue?

Next on my agenda was the grocery mega-store.  After finding the items I needed,  I was Miss-identified again at check out,  Feeling rather pleased with the performance of my new triple blade razor and "the same old makeup I've been using all along," I moved on to Office Depot.  There, several clerks addressed me as Ma'am while helping me locate the needed items.  Bingo...Miss-identified at 3 out of 3 locations!  Next was the gas station...the pump was automated and it didn't care at all about my gender!

But afterward I had to stop for lunch.  Went into a Subway, and was greeted with absolutely no gender specific pronouns at all.  Not one!  At least that was an improvement over the "sir" I usually get at Subways. The place was very busy at this late lunchtime - the only remaining table was back near the restrooms, behind an elderly couple sitting there. They were minding their own business as I walked by.

After I finished my meal, I decided to use the restroom, since waiting till I got to the Doctor's office just wasn't going to work this time.  I chose to use the men's room as an experiment, to see if the woman (whose line of sight I was in) would try to warn me that I was going to the "wrong one."   They really must have been oblivious to the world - nothing whatsoever was said!  Oh, well...it is what it is.

On to the Dermatologist.  Enroute, in spectacularly sunny 70-degree-plus temperatures (72 on the car thermometer), I found listening to holiday music on the radio to be a bit disconcerting - how can it be the holidays, when wearing a tank top, short skirt and flip flops would be totally appropriate?  (And several girls actually were so attired.)  Reminds me of the days from my youth, when, living in the San Francisco area at the time, it was possible to enjoy a pool party on New Years Day, in similar temperatures, among trees and shrubs with foliage on them.  I couldn't get used to it....and while I don't require "a white Christmas" in order to be happy, it's nice to have 4 distinct seasons!

Before going in to the Doctor's office, I snapped a picture: 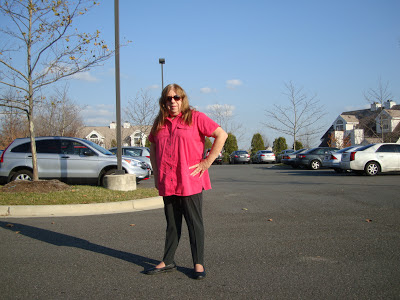 Once at the desk, no gender-specific pronouns were used by the staff when addressing me.  It was a shame that it had been necessary to use the toilet at Subway!   I had a different doctor this time, who knew me from visits prior to the last one.  After our greetngs, she asked what scent I was wearing.  My reply was that it was Navy, and she thought it was very pretty, a good choice for me.  Then she commented on my smooth, almost hairless arms.  So I told her about my having had them lasered years ago.  She thought it worked very well...

Since they now do laser at her office, I asked about my face.  She couldn't see much because of my makeup (and removed a little to get a closer look), but thought with as much as 40-50 percent black hair it still would be helpful, to remove the black quickly and leave only the gray.  Unfortunately, right now that expense isn't financially in the cards...but a good close shave with this new razor is performing much better than I had expected.  After shaving at 9:30 AM, there was no stubble visible by 3:30, could just feel a little roughness.  With some really good beard cover,  9 to 12 hours without a glimpse of my beard might be a possibility.  Not enough to "fly pretty," but enough for a bit more confidence that my beard won't show in normal activities.

We completed the visit in short order, and I was on my way home, after a very successful day!